Construction will see faster employment growth than any other of the six major business sectors, according to projections by UK Commission for Employment and Skills.

Between 2012 and 2022 the average annual rate of expansion in the construction workforce is put at 1.4%. That compares with 0.6% for the economy as a whole (see top graph). 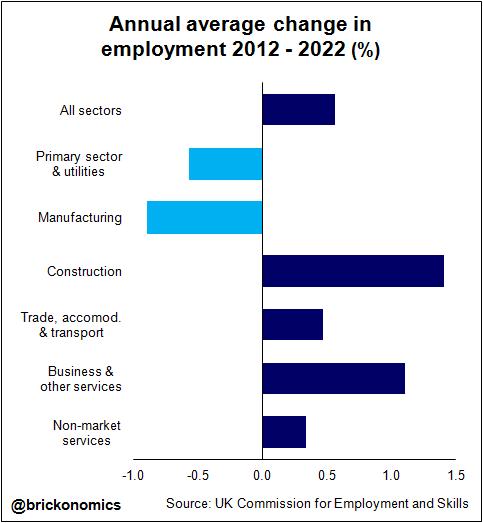 Even when you look at the economy divided more finely into 22 sectors, construction still comes out third, after information technology and electricity and gas.

One startling figure in the wealth of data published in this research is the implied need for construction to find more than one million new recruits in the 10 years from 2012 to 2022. A daunting challenge.

But, for me, the mind-blowing figure in the whole array of data is that, with the steady decline in skilled trades in manufacturing and other sectors expected to continue, more than half of all new skilled trades jobs created in the UK between 2012 and 2022 are projected to be in construction.

That should place construction central in the minds of careers advisers. If a youngster is looking for a solid skilled trade for a career, construction is the first port of call.

The scale of growth presented by the UKCES projections amplifies the message from the recently released by CITB’s Construction Skills Network that the industry needs to recruit heavily.

The assumptions, base years, definitions of construction and the methodologies used will differ between the two studies. But, while UKCES takes the narrow definition of construction, its projections are more dramatic than those of the CITB. The UKCES projection implying a need for an average of 100,000 new faces a year between 2012 and 2022 compares with CITB’s latest forecast of an annual recruitment rate of just shy of 45,000 between 2015 and 2019.

One part of this difference may be explained by the horrendous demographic bubble in the age profile of the current crop of construction workers. There’s a high proportion moving into their 50s which suggests a likely acceleration in retirements over the next 10 years.

Looked at from the point of view of those considering a career in construction, an industry offering jobs for 100,000 new faces over the next decade is fantastic news.

You’d think this would be cause for celebration. And it should be.

Sadly looked at from a wider perspective it just adds more worry to an industry wondering how to cope with expanding demand. A major reason why the projected growth in construction jobs is so high is that so much of the workforce was lost to the recession.

The other issue, put bluntly, is that the cost to train a million new people from scratch would come in not far shy of £30 billion. That’s a £3 billion annual bill before you add in the cost of ongoing training of the existing workforce.

Both sets of projections underline the massive task ahead rebuilding the construction workforce. And there’s little hope of finding slack to call upon from among unemployed former construction workers. Those numbers are back to pre-recession levels.

The latest construction survey by RICS, the surveyors’ body, shows skills shortages at their worst since the boom years before the recession. Furthermore, RICS conducted some research that led to the rather apocalyptic headline “Will 2019 be the year that the UK stops building?” on its website. Apparently the research showed firms turning down work at a disturbing pace through lack of resources.

The truth is, as a nation, we screwed up in the recession, allowing a strategic industry to atrophy and blindfolding ourselves to the obvious need to have the industry at near full throttle when the recession eased. I say “we”, but I really mean the folk that administer this country.

But for all the mess that the industry must manage in the short term, projections suggesting strong job opportunities in the industry should be welcomed. It must be seen as an opportunity, a base on which to rebuild the industry for the future.

The data stem from the UKCES Working Futures programme (see The Future of Work report published in February 2014). Clearly, whether you accept the numbers or not, they make for interesting reading.

The projections suggest the construction industry will employ in 2022 more people than at any time since 1990. But the biggest growth rates will be in management and technical occupations rather than in the more traditional skills.

The implication is that the profile of the construction workforce will steadily become a more white collar industry. The second graph shows the expected shifts in the proportions of occupational types in construction between 1992, when many of today’s main crop of construction folk were building a career, and 2022. 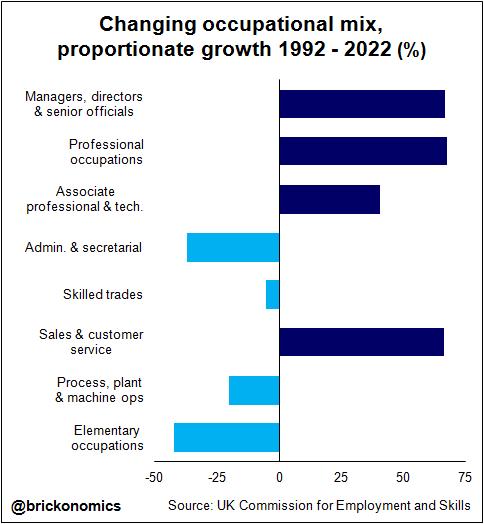 However, the biggest task for the industry in terms of sheer number will be in recruiting and training skilled trades. The UKCES projections suggest it needs to find about 461,000 in the period 2012 to 2022.

There will be on these projections proportionately two thirds more senior managers and professionals, two thirds more in sales and customer services and about 40% more associate professional and technical staff. Administration and elementary skills meanwhile will have shrunk by about 40%, plant operatives will decline by about 20% relatively.

The shift is expected to be mirrored in the educational background of those within the industry. From 14% with education rated above A-level in 1992 the proportion was put at 21% in 2012 and is expected to rise to 30% by 2022. The numbers with higher degrees and doctorates is expected to more than double.

Boiled down, to make this scale of transformation within the industry, the implication is that newcomers to construction are expected to be on average far more highly educated.

Perhaps depressingly, especially given the reshaping in the roles expected within the industry, the UKCES projections don’t see the proportion of females rising in any meaningful way. 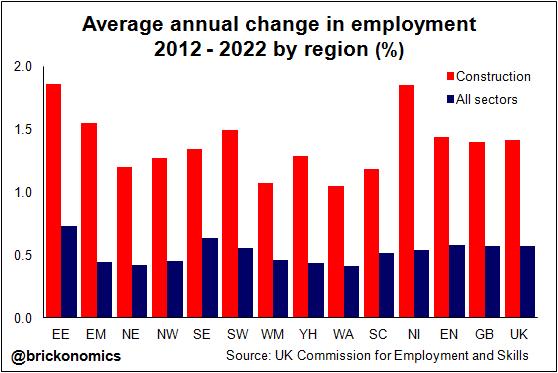 However, this is partly because of the proportionate fall in administrative and secretarial jobs. Women’s faces will continue to become more present in more senior roles, although by 2022 the projections suggest they will still be fewer than one in five.

The data also allows us to explore where the rise is likely to happen. Here one needs to be a bit cautious because of the fickle nature of construction demand regionally. The third graph shows how across all regions the expansion of the construction workforce is projected to easily outstrip employment growth within the economy as a whole.

Clearly the challenge to find one million new recruits will be a daunting one across the nation. But the more pressing challenge is for the industry to turn this pressing threat into an opportunity to build a better industry for the future.

Here, I feel, the Government rather owes the construction industry major support if it truly is wedded to having a long-term economic plan.