The recent welter of more upbeat economic data has left the numbers in the latest construction industry forecasts pretty much unmoved, with the exception of private housing.

The broad view is still that this year will see output fall, between 1.5% and 3.8%, with recovery taking place sometime between the end of this year and sometime next year, depending on which forecast you look at.

Excluding private housing, there have been tweaks here and there as the forecasters have adjusted their numbers to account for various revisions to the official data. But broadly the direction and strength of change for most of the sectors is in line with the view taken in the Spring. 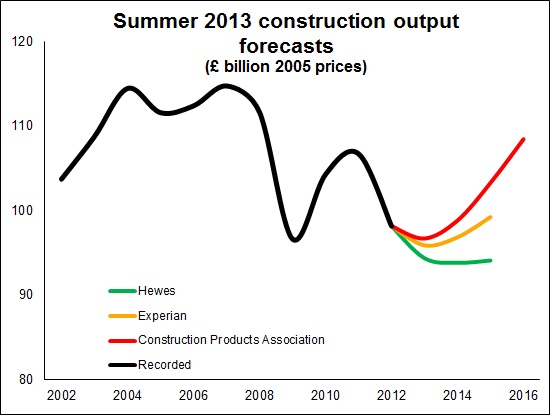 Naturally, the various forecasts differ on the strength of the recovery, with the Construction Products Association being the most optimistic and Hewes the least.

Hewes expects a small fall in output in 2014 and a negligible rise in 2015, whereas the Construction Products Association sees 2.2% growth in 2014 and 4.5% growth in 2015. Experian tracks somewhere in the middle of those two as is clear from the graph.

But by and large the latest forecasts represent fairly small tweaks in outlook much of which was necessary to accommodate revisions to data.

The notable exception is private housing, where both Hewes and the Construction Products Association forecasts have boosted their forecast growth for this year by more than 4%. This is on the back of the expected impact of the Government’s Help to Buy scheme, as evidence emerges that it may provide a short-term boost to activity.

If they are right this suggests somewhere between £600 million and £800 million more work this year and next than previously expected.

Interestingly, Experian chose not to reshape its forecast for private housing. This was not because it didn’t recognise the likelihood of a boost to production. It did. But it also recognised the possibility that the scheme could create a market bubble. Basically it is taking a cautious approach and reserving its judgement until there is more clarity over the scheme itself and the impact it is having.

For me though the most telling outcome of the latest round of forecasting is that on balance for all the promise of a strengthening recovery in the general economy the forecasters don’t see more work in 2015 than they expected to see when they forecast three months earlier.

But to take that at face value would rather miss one very important point. There appear to be fewer downside risks than there were. On that basis there’s something to be more cheerful about as the industry grinds its way out of a nasty recessionary period.

One thought on “Not much more sun, but fewer black clouds in latest construction industry forecasts”