Today I read headlines suggesting the recovery in construction is on its way. Ultimately it is, but when?

The cause of the excitement was the RICS construction market survey, which comes hard on the heels of lots of seemingly more favourable data.

The RICS survey is a useful tool and potentially a good early indicator of the fortunes of the wider construction industry. But the data need to be interpreted with caution.

So while many of the indicators in the second quarter of this year being at a six-year high can be seen as encouraging (see top graph), it’s sensible not to read this too literally and conclude that the engine is churning away as it was six years ago. It ain’t.

The commentary from the RICS economists certainly doesn’t put that interpretation on the figures.

True, the latest RICS survey supports other early indicators of construction activity, such as the RIBA Future Trends Survey of architects (see second graph), in suggesting things may be on the turn for the better. But it’s too easy to overstep the mark when seeing these seemingly exceptionally strong readings and expel embarrassing yippees that are really not due.

The most important thing for me when assessing surveys of this kind is to look to who is being asked what.

Then, if it’s a sentiment survey trying to gauge whether things are getting better or worse, it’s worth taking into account the reference base being used and seeing that within a fairly long time frame. If things were the worst they could ever be yesterday and today they are a bit better, that may well feel like a massive improvement, but it doesn’t mean that things are in good shape.

One also needs to consider the probable causes of change both in sentiment and in the real world, the two may be different.

So, that said, what should we make of the latest RICS construction survey?

The survey is of surveyors. So on balance they tend to see activity ahead of work on site. This makes this survey interesting. But the survey will tend towards consultants rather than people actively doing work on site.

Now, consultants work patterns may well be very different at different stages of the business cycle, or should I go out on a limb and say they are. Simply put, as work falls speculative projects disappear. So the survey might exaggerate the likely fall in work on the ground. Before work rises clients spend time testing the water with projects that may not come out of the ground. This might lead to the survey exaggerating the likely increase in work in the pipeline for contractors.

So we have to factor this in when interpreting the data. 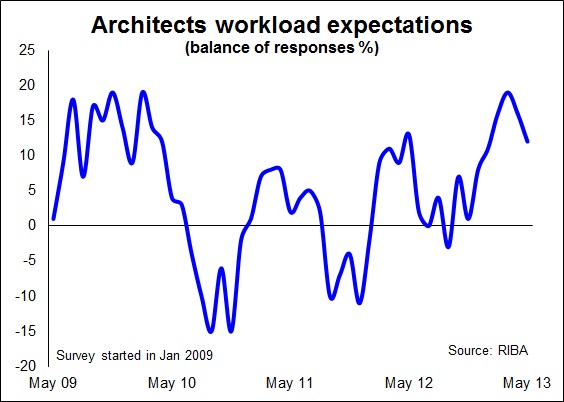 The first point to note on the latest scores relative to the past is that the first quarter was pretty poor for construction. Now this doesn’t show in the RICS figures, because the March survey score does tend to be quite high. If you add up the scores for March survey from the past 10 year they are (on my rapid calculations) almost double those for the corresponding December and June scores and more than three times the September score. New Year optimism eh? Well maybe, I don’t know.

But there will have been a bounce, certainly in the mood within the industry, from the poor first quarter and this will have had an effect on sentiment.

Furthermore the weather has been better. That makes people feel more optimistic, up to a point when they get bored of melting. And there has been a flurry of well-received general economic data.

This has particularly come through in the housing market, where the much-derided Help to Buy scheme (although only partly implemented) seems to have galvanised buyers into buying and builders into building a bit more. Unsurprisingly private housing is the most strongly-rated sector in the survey.

It is also noteworthy that while the figures suggest a broad-based rise in activity encompassing many of the firms in the sample, the more detailed questioning showed that on average the respondents expect a rise of 1.9% in workloads over the next 12 months. This is below trend growth.

There are a couple of other cautions I might add about the survey data. It is hard to unpick the impact on sentiment derived from the rising level of work that consultants seem to be picking up from abroad. There has been a shift in the workload mix at many consultant firms, with a sharp increase in the share of overseas work done within the UK. It is possible that some of the rise in sentiment may derive from this.

And we have the constant problem in sentiment surveys of survivorship bias, where the survey runs hot simply because worse-performing firms have fallen by the wayside to have their work picked up by those that survive.

I was also taken by the different levels of confidence the respondents had in future work, future employment and future profit. They were considerably more cautious about employment and profit in which it might be argued they have a greater personal stake.

So when reading the runes from this survey I think the commentary has it pretty much right when it says: “We interpret the latest data as evidence that the sector is beginning to regain some composure rather anything even remotely close to a return to form.”

Personally I would remain cautious. The Conservative element of the Coalition appears already to have its sights on the next election. The Help to Buy scheme looks like a major plank in the strategy to create a notion that the economy is healing.

One would hope that it is after three years of flatlining. It is more extraordinary that it has so stubbornly failed to grow over the period, particularly when you adjust it for a near 1% increase in the working-age population and more people working past their normal retirement age.

Furthermore we should expect a bounce from restocking as firms raise their levels of production. This too should be taken into account.

This all sounds rather downbeat and I don’t mean to be. Things do look better today than they did three months ago. But it is too easy to see sunny skies when looking in one direction and miss the black cloud looming up behind you. 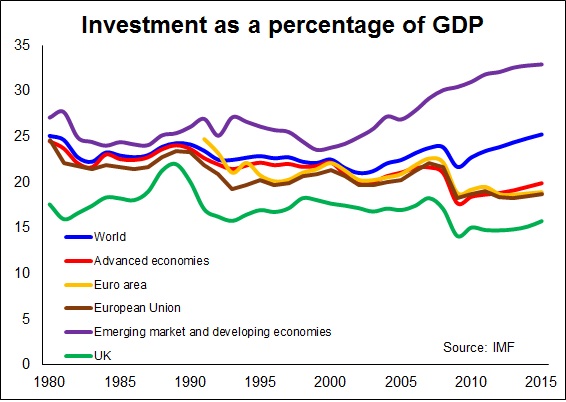 So to lighten the mood I will give you a graph that looks very depressing, but that I think offers real hope for construction growth in the UK.

The data come from the IMF’s World Economic Outlook. It shows investment as a proportion of GDP. It shows the pitiful lack on investment in the UK economy over decades and the IMF’s view that the pattern is unlikely to change over the next few years.

If the Government’s rhetoric about competing abroad has any substance, frankly we will need to get into line with the competitors.

I know we’re British and we can win sports without training and drinking beer in large quantities. We proved that in the 1970s and 1980s. So why would we need investment to improve our economic performance?

Sarcasm aside and call me a rose-tinted bespectacled old-fashioned optimist, but this has to be a great opportunity for construction growth.

We can see the way, now all we need is the will.