Listening to the Budget speech is often theatre, with oohs and ahhs. Reading the documents is more often a prosaic task punctuated with eh? and what?

This Budget provided no exception. Even though it failed to light fires for the construction industry, it did provide interest.

George Osborne’s Help to Buy scheme captured the imagination as he spoke. Sadly, unpicking the detail, such as it is, there is plenty of scope for both questions and concern.

The Chancellor was not subtle in trying to sell the catchline “the aspiration nation”. But it led him neatly to say “…what symbolises that more than the desire to own your own home.”

And then to: “Today I can announce Help to Buy.”

Great! For an industry desperate to see more homes built, indeed more anything built, his words offered promise. What possibly could be wrong?

A future where thousands of would-be first-time buyers and trapped first-time movers (or second steppers) have the frustration of sky-high deposits removed can’t be a bad thing?

Basically Help to Buy is a two-pronged initiative.

The first element is an extension of the FirstBuy scheme which sees the Government taking an equity loan of up to 20% with the buyer putting in at least a 5% deposit. This scheme will from April 1 be available to all home owners (not just first time buyers) who are looking to buy a new home worth up to £600,000.

The second element is a mortgage guarantee, similar in essence to NewBuy, intended to open up from January 2014 mortgages on all homes (not just new) worth up to £600,000 to buyers who can stump up 5% deposits.

The first issue the sceptic sees is the scheme means Government taking on considerably more exposure to the housing market.

It certainly appears to make the Government more prone to losses should something very nasty happen to the housing market. Its exposure, technically, runs into many billions of pounds. That problem was widely picked up in the media and, from what I heard, rather poorly answered. 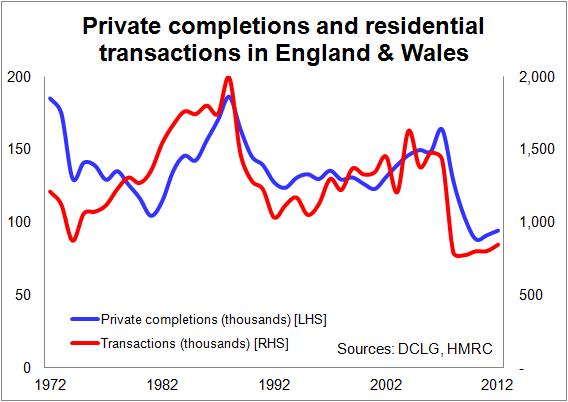 Then there is concern that the initiative will raise house prices. This was picked up on twitter almost as soon as the Chancellor uttered the words “Help to Buy”. And in fairness it’s a real concern.

If you increase demand, and this scheme is intended to do just that, you can expect an increase in prices. It’s not quite that simple. But it’s fair to say that more money in the housing market will put upward pressure on prices given the supply constraints.

So already that lovely sheen on this Budget initiative looks a tad tarnished.

Then there’s the question over will it work?

I would readily understand people dismissing this initiative without consideration on the basis of the Government’s rather sorry track record. Its big promises of more house building have not materialised, hence another initiative.

But where do you go after launching a “radical and unashamedly ambitious” housing strategy that fails to lift house building?

For my money the interesting aspect of this scheme is its focus on liquidity in the housing market. I don’t know whether the Government has recognised the link between liquidity (property transactions) and private house building completions. But, whether it has or hasn’t, the historic data suggests that if you want more private sector completions you need more housing transactions in the market place overall, as the top graph shows.

So, if this policy helps to boost sales overall it should boost completions of new private sector homes.

How much of a boost is hard to judge. Intriguingly the scheme could hardly have received a more muted billing from the Office for Budget Responsibility.

It states: “The expansion of the existing schemes is likely to have a relatively small additional impact on transactions and residential investment. The details and timing of the guarantee scheme have yet to be finalised and it is therefore too early to quantify the likely impact.”

But it adds that alongside the Funding for Lending scheme we should see significant growth in property transactions and residential investment. 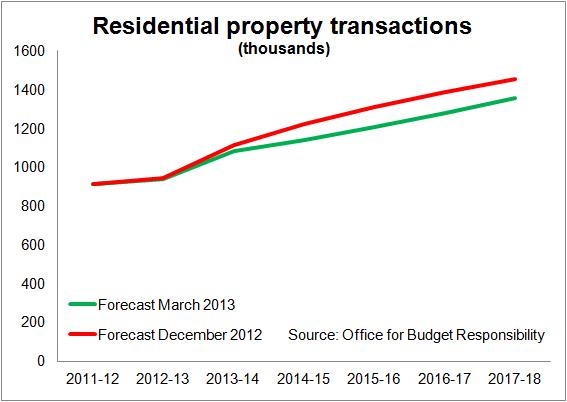 Ironically the announcement of the scheme seems to coincide with the OBR downgrading its forecast for residential property transactions, as the second graph shows.

If pressed I’d say I would expect to see a short-term boost in transactions and a corresponding rise in house building from pursuing these policies.

But I would be cautious about proclaiming that such a rise was a success. I have deep concerns for the long term.

I was no great fan of Grant Shapps as housing minister. But one thing I agreed with him about, indeed I applauded him for saying, was the need to rebalance the price of houses relative to the earnings of average folk.

There are two ways to do this. Through wage increases or through house price falls. Wage increases have for some time looked limited, while falls in house prices do carry unsettling social and economic impacts. So I expected rebalancing would be slow.

But if we do not rebalance wages against house prices we are building ourselves an ugly trap for the future.

I could go into the mathematics, but it gets boring. Basically if houses are relatively very expensive average earners are reliant on very low mortgage rates to buy one, unless they have a fat wodge of cash. Also buyers become increasingly at risk from a rise in mortgage rates.

These house prices and land prices can be very sticky, with the aspirations of the sellers set by the peak prices.

Many people believe that house builders do well if house prices rise. Well short term yes they may. They have land banks that increase in value.

But any house builder with nous who’s been in the game a while knows that that party can’t last. They know strongly rising house prices mean rapidly rising land prices, which in turn mean more risk when buying in the land market.

Ultimately if we want an active private sector housing market then ordinary people must be able to buy into it and their purchases cannot be contingent on ultra low interest rates or, for that matter, ever more extensive Government guarantees.

It would seem to me that if the Government is happy to have exposure to the housing market it might consider investing directly in building homes. This would not queer the pitch for house builders. History shows that the golden eras of private sector house building have coincided with significant public sector funded building.

I have discussed before notions of how the Government could sponsor house building and build assets that it can sell, if necessary, at a later date to private buyers or to social or institutional landlords.

Given we are in a recession, the net cost to the Government of building homes would be significantly less than the asset created. And I fail to see how £20 billion or so debt well covered by an asset, which the Government seems happy enough for its citizens to buy, would distress the buyers of British debt.

The Government has in my view wasted yet another opportunity to be truly radical and ambitious.

One thought on “What can you do when a radical and unashamedly ambitious housing strategy isn’t enough?”