The Lyons Housing Review was published today. After a speed read, I’m left pretty impressed with its analysis of the problems facing housing in England.

Indeed, my spirits were lifted even as I read the contents pages by phrases such as “positive planning”, “greater transparency about the land market”, “proactive land assembly”. 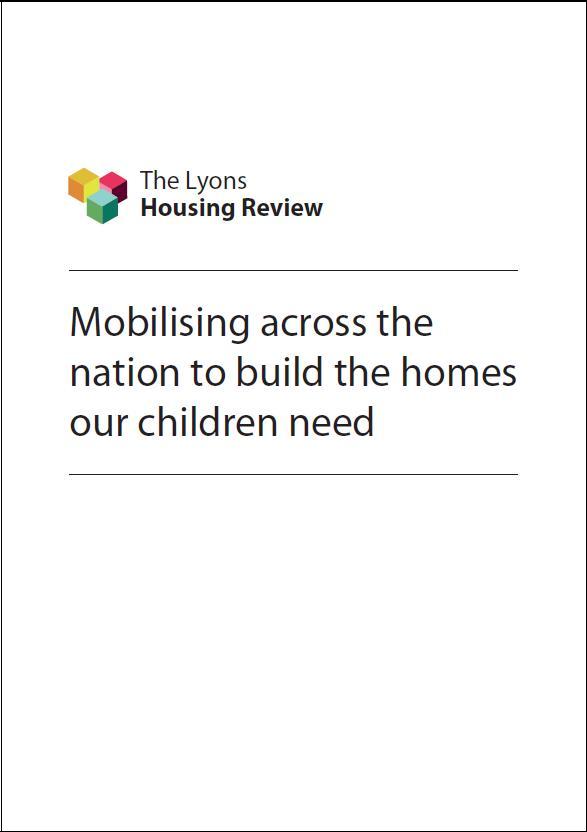 This is not yet another report where planning is portrayed as some evil dead hand restricting activity, but rather as it should be – a tool to get things done.

Encouragingly too, a flick through the recommendations shows that the report strays into areas some might see as politically delicate.

For instance, it suggests: “Compulsory Purchase Order powers should be strengthened and streamlined to make it easier for public bodies to acquire land where it is not brought forward and where it is a priority for development.”

The implication here is that CPOs might be put into play more readily in future.

And we might expect also to see some resistance to the recommendation that land ownership should be more transparent.

The report recommends: “To ensure greater transparency in the land market, the Land Registry should open up land ownership information to the public in a similar manner as the property price paid data set and make it a legal requirement to register land option agreements, transactions and prices.”

In any sensible world this would be a given.

Despite its willingness to nudge the boundaries of what might be politically deliverable, there will be many people disappointed that the report does not stray further. It could perhaps have been more strident on social housing, perhaps more bullish on direct public sector investment.

What will please many is that the report, from my quick read anyway, seems keen to end the sort of shilly-shallying that leads to things that need to be done not being done.

So, if local authorities don’t get their act together and deliver a plan, it recommends: “…the Secretary of State will have the power to direct the Planning Inspectorate to intervene and ensure an acceptable plan is produced in cooperation with local residents and partners including the local authority. Similar sanctions will apply if a submitted plan is deemed to be wholly inadequate.”

In total there are 39 recommendations. Plenty appear very sound and deserve discussion and consideration.

But the overriding point I take from the report (this seems to echo what I took from the recent Barker book) is that housing needs to be more central in the overall political thinking of the nation and that policy should be more coordinated between departments and more long-term government to government.

So the report recommends a Housing Minister attending cabinet. It calls for “an independent advisory Housing Commission to bring skills and expertise from across the housing sector to inform policy, advise government and provide independent scrutiny and challenge to government in meeting its targets.” And it recommends a national Housing Observatory be set up “as a single repository for key data, forecasts and analysis on housing to assist policy making, evaluation and a consistent approach to housing market assessments.”

Importantly too, it recognises that sometimes it’s better to go with the grain and curb the desire for radical reform. Yes, it calls for a review of the New Homes Bonus, the flagship policy introduced by the incoming Coalition, but it is clear that a major disruption to the new planning regime introduced by the Coalition would be a mistake. It looks to build on what is there and improve.

The critical point here is that house building and the successful delivery of better housing for all benefits from a relatively stable legislative framework.

Certainly, for my taste at least, too much policy today is driven by “eye-catching” tactical moves aimed at relieving political pressure, scoring points against the opposition or shamelessly seeking votes. This inevitably creates a Frankenstein’s monster of a housing system.

Here’s a welcome, if optimistic, passage from the report:

“Decisions on housing should be at the heart of major strategic decision making across Government and recognised as an essential part of the infrastructure we need to support growth. That work extends beyond the life of a single Government. Sir John Armitt’s review of infrastructure planning stressed the need for longer term planning for infrastructure investment in the UK based on evidenced assessments of needs and clear plans as to how they will be fulfilled. As Sir John highlighted, such a strategy will not be delivered without strong and enduring political will that transcends the confrontational nature of UK politics and the short-term pressures of our electoral cycle.”

Back, then, to the real world.

After a very rapid read of the Lyons Housing Review untainted by what others might have written, I decided to check out the reaction. Well pre-reaction, as the coverage was penned in advance of the actual announcement.

The obvious place to start I decided was to look at the BBC’s take. I thought I’d read the opening paragraph from its story on the review and how it encapsulated the political message of the report.

“First-time buyers will be given priority when communities in England ‘take the lead’ in building new housing, Labour is promising.”

And, yes, that pretty much parrots the key message in the Labour Party press release.

Later in the BBC piece we read:

“Mr Miliband will say: ‘There has been a systematic failure to build the homes our country needs.

‘And, for too many young families, the dream of home ownership is fading fast.’”

By way of counterpoint we read the clearly considered views of the Conservatives:

“But Conservative Housing Minister Brandon Lewis said Labour was ‘pulling the wool over people’s eyes’, adding: ‘They say they can meet their housing promises and not borrow a single penny extra to pay for it – but this just isn’t credible.’”