The number of people employed in construction is up 3.3% on a year ago, according to the latest ONS Labour Market data.

This finding underlines official data showing a steady rise of the industry from recession. Output in the second quarter was up 4.5% up on a year ago. 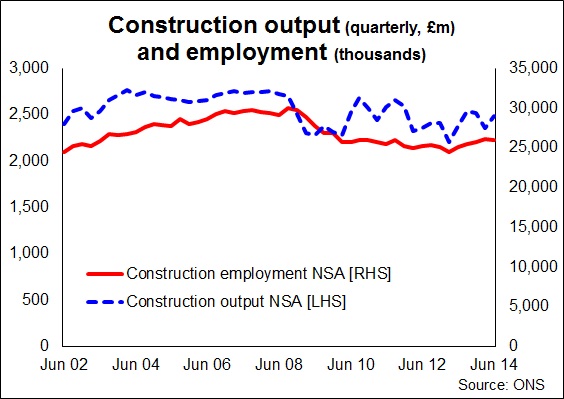 The growth in workloads is solid, but by no means a boom-time level, and like output the rise in employment stalled in the second quarter.

There are of course always reasons to question the data. One question I might ask is whether there has been a sharp increase in overseas labour coming into construction. This would most likely have been missed in the surveying.

We also have to wonder whether employment levels would have been higher if there had been a larger pool of unemployed and trained workers to call on. Unemployment has fallen sharply for those seeking work in 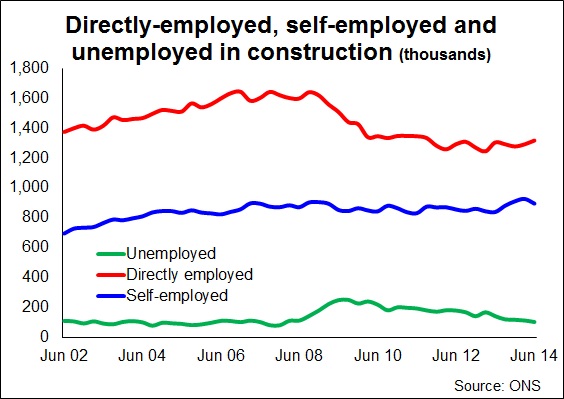 These are things we can’t know from a quick scan of the Labour Market data. Taking the data at face value and in a wider context, however, we see a picture of a continued improvement.

The industry has lost about 350,000 employees on this measure since the peak in 2008. In aggregate numbers this loss has been within those employed directly. The level of self-employment recorded over the past year suggesting it is at or above the former peak. 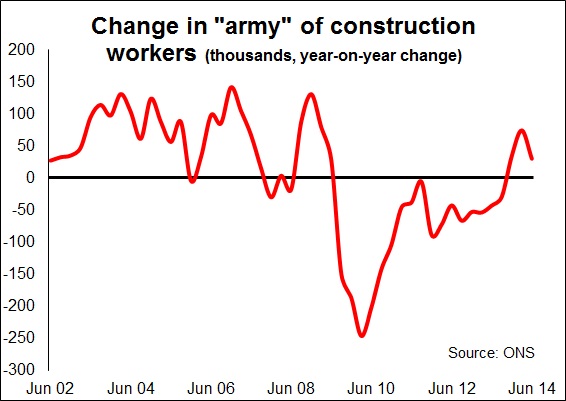 Looking to the future the concern has to be where to find new blood to fill the jobs being created. Unemployment has dropped to levels consistent with a tight jobs market. The growth in the number of employed and unemployed construction workers is slow, as we can see from the bottom graph.

There is no great “reserve army” in the UK of skills waiting to take the jobs increasingly on offer from the industry. Meanwhile the age profile of those within construction has risen, suggesting a faster rate of retirement in the future.

Within this context we can expect to see a rapid rise in foreign labour and we should not be surprised by rising costs.