Construction output grew 0.6% in the first quarter of this year. That’s up on an earlier estimate of 0.3% in the first release of the GDP figures. Work done in the first three month was 5.4% more than in the same period a year earlier.

That’s the very encouraging headline story from the latest ONS construction output data. And we can be more encouraged given the iffier-than-normal weather at the start of this year. This provides reasons to think that underlying growth is more than the figures posted might suggest.

You’d certainly might expect so, given the multitude of construction trade surveys registering sentiment somewhere between positive and ecstatic. It’s dead easy right now to get carried away with the exuberance in some construction circles.

No doubt things are getting better. There’s considerably more optimism about. But after a seven-year slide with a few bumps on the way from the 2007 peak to now, you’d expect to be enjoying better times.

So, is there a danger that our excitement is running ahead of us?

Nobody can hide the fact that house-building work has been expanding sharply and looks on track for more strong growth. Construction work attributed to private new housing in the first quarter of this year was up 23.1%, says ONS. Mind you it needs another 30% growth to get back to the level we saw in early 2007, which then was described as too little to meet the nation’s needs.

Public new housing is up too over the year. Here I’d be a bit cautious over drawing too much from this, because the distinction between what’s popped in the figures for the public and private housing sectors is increasingly blurred.

Either way new house building is storming compared to its dark days in the depth of recession. On top of this housing repair maintenance and improvement work has bounced back over the past year or so. 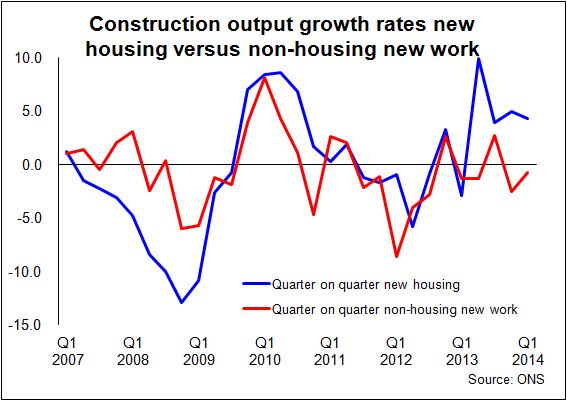 Bearing that in mind, look at the set of graphs splitting housing from other construction work and you get a clue that this so far is more a story about a house-building recovery than a construction recovery. 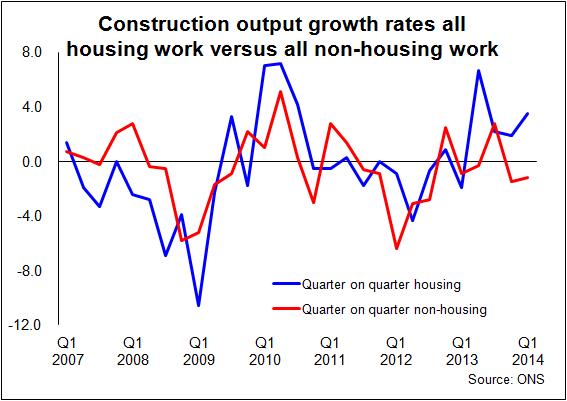 We’ve heard much from the Government over the past few years about the need to improve the supply side of the economy and invest in infrastructure. It’s bandied large figures about telling us of its investment intentions.

Well there’s a strong case to argue that it would be good if the Government’s pockets were where its mouth is. The data suggests infrastructure work is almost 10% lower now than when the Coalition took the reins four years ago and 4.8% down on a year ago.

Public other work is obviously down on the year ago as is public non-housing repair and maintenance work. That’s no shock given the cuts to spending.

But private industrial work (admitted a small sector and so quite volatile) is also down. 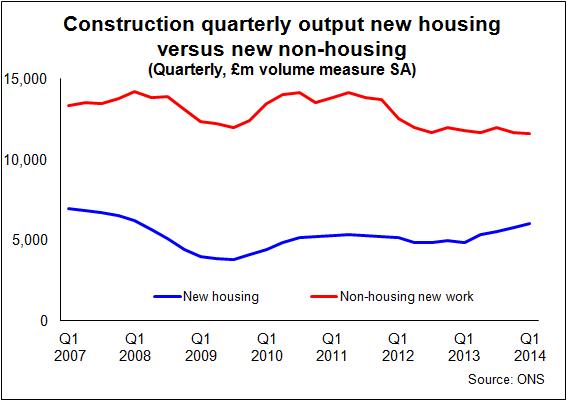 Growth in the private commercial sector has been very feeble to date. It’s down more than 10% from where it was when the Coalition took over and inherited what looks like in the figures a mini-revival. 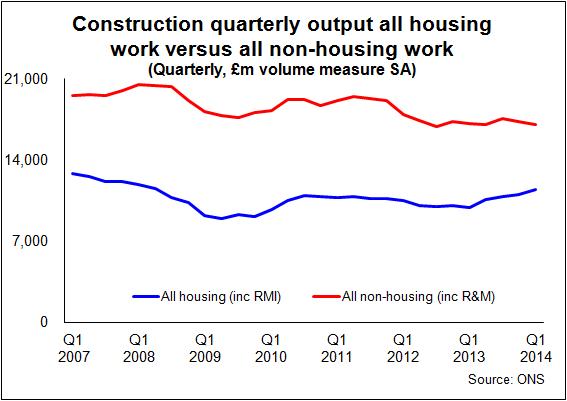 Looked at in these terms the argument that the Government has built what looks like a recovery in construction on the back of late-in-the-day controversial sector-specific support (Help to Buy) appears to hold more water than George Osborne might like to drink.

Critics, myself included, long argued for more direct Government support for construction much earlier. This would have left the industry with far fewer supply headaches – a depleted and ageing workforce just one – than it now suffers.

Leaving irritation over the past aside and looking from where we are now, there’s plenty to cheer us, despite the rather lacklustre performance to date of non-housing construction work.

All the indicators worth looking at that illustrate what’s coming down the pipeline, architects and surveyor surveys for instance, suggest there is a surge in work heading for building sites around the UK.

There’s plenty too that has convinced the industry forecasters that construction growth will spread out from the housing sector this year.

However, today’s figures are a sober reminder that the recovery we see still has a way to go before it is established as a construction recovery rather than a house building recovery.

Even so, just the smell of better times ahead must make it hard for the wider construction industry not to get excited after seven lean years.