The latest set of construction forecasts from Experian, the Construction Products Association and Hewes all exude greater confidence than those released at the start of the year.

There were few radical changes to the expected numbers above adjustments that would naturally be made to accommodate new data. But the sentiment is more encouraging, with concerns over downside risks easing. 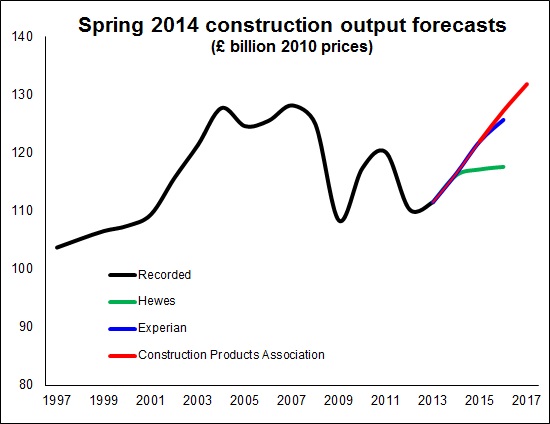 Indeed Experian suggest that the balance of risk within its forecast has probably shifted to the upside. The downside risks of squeezed real earnings and renewed problems in the Eurozone have eased.

But the Experian forecast does highlight the relatively newer threat of a house price bubble as a growing downside risk. Meanwhile Hewes points to interest rate rises as a threat.

This does not take away from the fact that all forecasters expect strong growth this year and this in the eyes of Experian and the CPA will be maintained in the medium term.

Hewes, which tends to factor in more downside risks, sees the rate of growth slowing sharply after the election.

The consistent feature of all the forecasts is the strength of the new housing market. The consensus suggests more than 20% growth over the three years from 2013.

Both Experian and CPA are bullish on infrastructure, suggesting growth of about a quarter over the three years from 2013. Hewes view is significantly less optimistic with relatively low growth expected, but no contribution from Hinkley is included as it has yet to secure EU approval.

Another key difference is that Hewes does not foresee a sustained strong recovery in commercial building, whereas both Experian and CPA see a solid and increasing rate of growth. This is a huge sector and so has a large impact on the overall output. Hewes says its relatively cautious position relates to the susceptibility of the sector to higher borrowing rates.

The takeaway from these three forecasts is that the picture is brighter and there are more upside risks emerging while the downside risks ease.

But fragility remains with particular concern over inflation in the housing market and the potential impact of higher borrowing rates, should they come sooner rather than later.