For me there’s something dreadfully sad about the timing of the Government’s announcement that it is backing £36 billion worth of planned investment for 2014 and 2015.

It will, say the Prime Minister and Chancellor of the Exchequer, support 150,000 construction jobs.

This should be greeted with unfettered joy. But I’m afraid I can’t see it that way.

Well imagine Government leading a construction industry motorcade, ignoring the road ahead, too busy scanning the crowd for adoration, unaware when to use the accelerator, the brake, or for that matter the gears. Behind all is in chaos.

A tortured metaphor, but hopefully you get the drift. Leaders should lead not preen and posture.

The right time to invest in construction was when industry output plunged and remained low. The Government suggested such spending then would upset the international money markets. Rubbish. Even in the extremely unlikely case that a well-judged increase in capital spending had annoyed these folk, it would have been worth doing in the long run.

There were warning calls: spend on construction or lose a generation of construction workers, professional and trade. Strong arguments were made: the taxpayer would get bargains if it spent more on construction in a recession.

The Government didn’t spend more on construction. It cut. The Construction Products Association estimate publicly-funded construction output, including PFI, fell 14% from 2010 to 2013 where it sat 27% below the pre-recession level. The industry lost a generation of professionals and skilled trades.

Now, conveniently timed before the General Election you might think, the Government parades its spending prowess and how it is “helping hardworking people and backing business with investment in better infrastructure”.

Good timing? For whom I wonder. 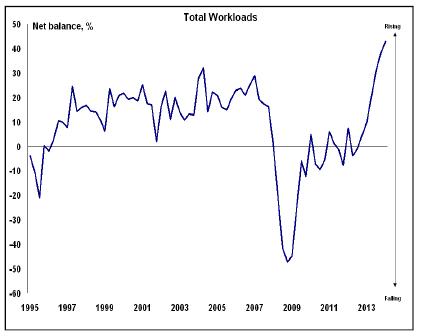 Today what do we see? Yet another trade survey reveals the strains of an industry desperately trying to fill the gaps created by a prolonged and deep recession (see graphs).

The indicator of expansion used by the surveyors’ body RICS is a balance of those seeing growth against those seeing contraction in workload over the past three months. 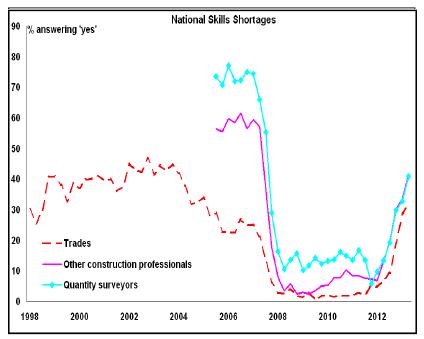 Given that we most likely have yet to experience the full force of this upswing, there is every reason to expect these problems will increase. And fast.

For businesses and for the workforce this is great news. More work, more turnover, bigger margins, more profit, more pay.

But for clients, is the sudden surge in work a good thing? More cost, more delays, more uncertainty and the risk of lower quality.

There’s a further rather twisted irony, given the Government’s wider political priorities. Where will we find the 150,000 skilled folk to fill the jobs created over 2014 and 2015 by this investment? Increased immigration? 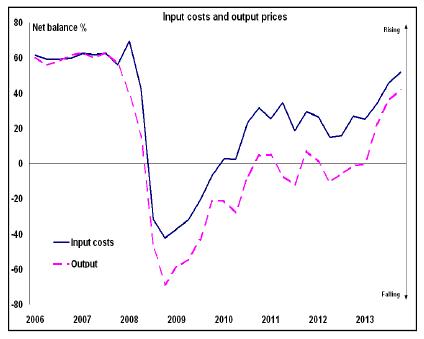 It is absurd that the industry should be expected to go from famine to feast so swiftly, yet again. This is not the sign of a “well-run economy fixing the roof while the sun is shining”.

When the private sector is steady on its feet again you can build for the nation a little less, having already put in place much of what you need. This will help to avoid overheating and skills shortages and uncertainties and rampant price rises. And it will cost the taxpayer less.

This is not knew wisdom.

It was wisdom ignored.

Now the consequence of this folly must be managed carefully if we are not to further damage the long-term future of the construction industry.