The construction industry imports about 10% of its output value in building materials and seems to have done all my adult life at least.

Admittedly the figures are a bit ropey, but the pattern looks pretty clear from the top graph. 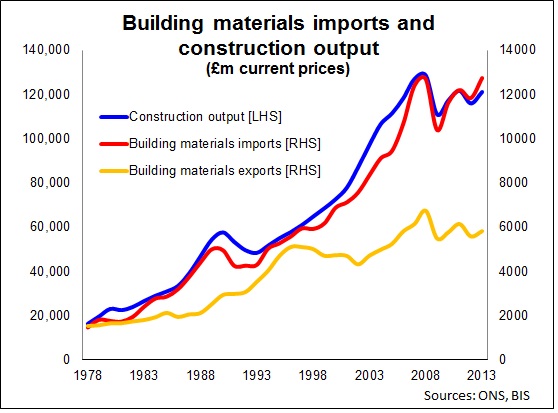 This is important, because the Government’s rather suspect industrial strategy (pdf) for construction has as one of its big targets a 50% cut in the building materials trade gap by 2025.

Looking at the current data I reckon that means, according to my quick calculations anyway, exports would have to expand at about 4% a year just to hit that target if imports remain where they are now.

If imports continue to grow with construction output – as they have over the past four decades – and construction grows at, say, a modest 2% a year, then exports will have to grow at about 6% a year. 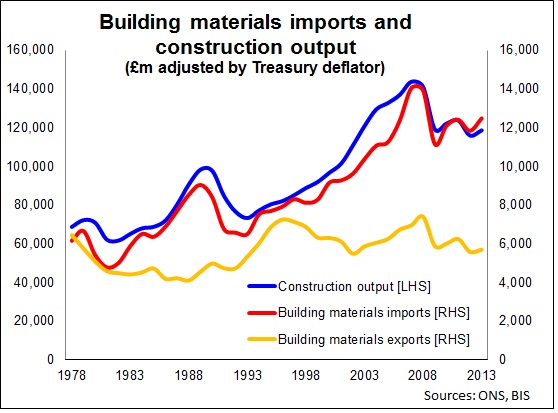 That’s a big ask. The second graph, which I have adjusted to take some account of inflation, illustrates just how poorly exports have performed over the past two decades.

I raise this issue of imports and exports because that big ask is likely in the short term to get a whole lot bigger.

The rapid increase in house building has generated a shock in the demand for bricks and blocks.

A number of factors were at play here in addition to simply the extra bricks and blocks needed to build more homes: 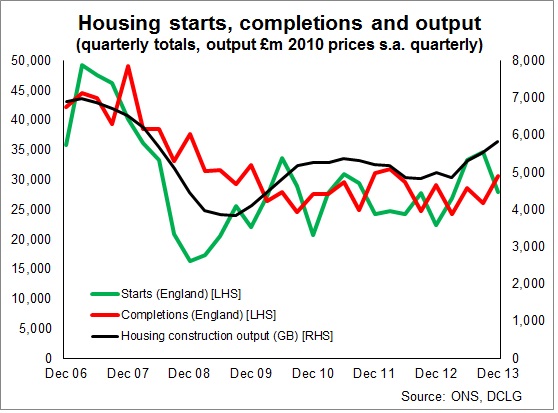 In fact if we look at the recorded level of housing activity the upturn doesn’t so far seem that spectacular. And sales of both bricks and blocks didn’t spike that crazily, even though firms were recording best-ever quarters in the early part of 2013. Had they been prepared they would probably have been able to pumped up their stocks in the winter to have accommodated most of the upswing. 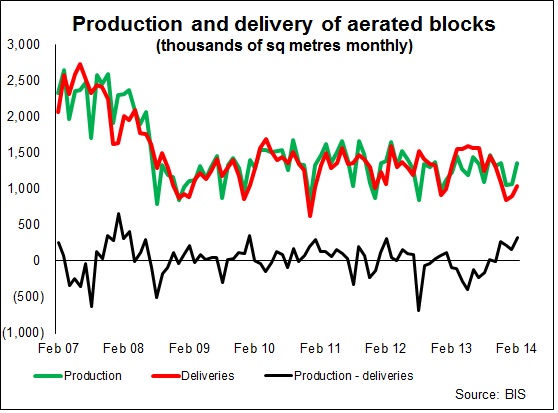 What threw me looking through the data was how since August deliveries of aerated concrete blocks actually fell, while brick deliveries increased. This paradox was explained to me thus.

The sharp rise in demand up to August was met in part from stocks which eventually ran down. This meant firms having to limit supplies on a priority basis as they turned up production and rebuilt stocks. The net result was a fall from the stock supported level of deliveries, despite a rise in production. 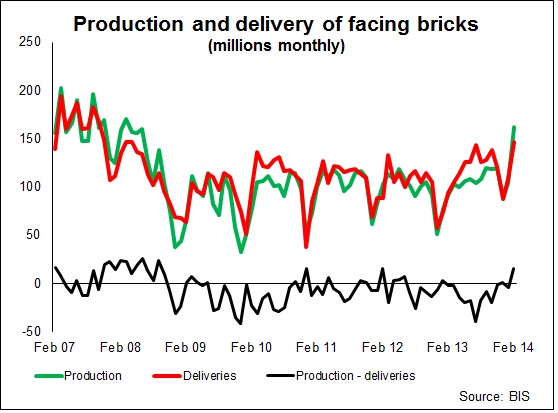 But what is clear, builders looked to imports to make up for shortfalls. The graph shows how imports of bricks and blocks jumped in 2013. Most of that jump was down to a surge in the second half of the year. In the final quarter imports were more than double the level in the same period a year earlier. 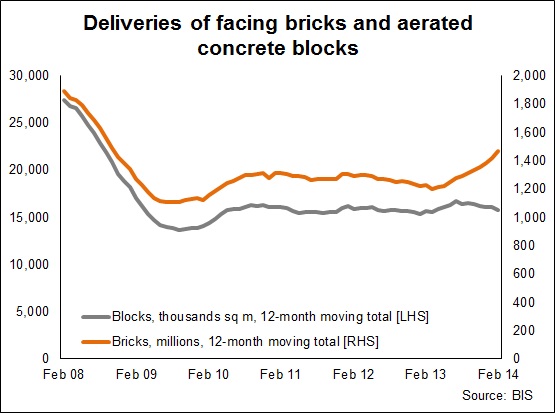 Looking to the future, the hard question to answer now is whether the reliance on imports will become normalised. Price and choice will play their parts here, but if imports become a more permanent feature of the brick and block industry it may well lower the incentive of manufacturers to invest in the UK.

And don’t forget decisions to invest here are not just based on demand. For instance, for manufactures of these products energy costs and certainty of supply are determining factors. There are big questions over the UK’s energy policy. 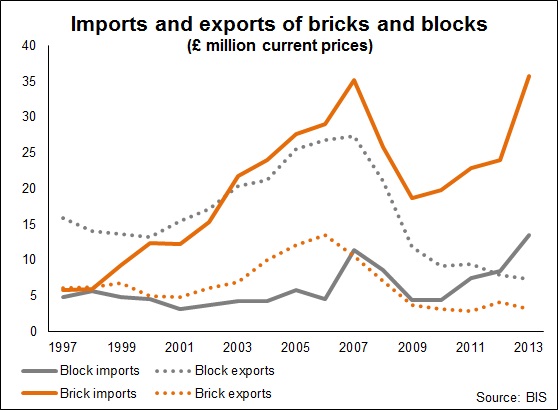 For me, however, the more telling curve is the one that shows exports of concrete blocks falling below those of imports.

In microcosm we see here the scale of the challenge set by the construction industrial strategy in trying to cut the building materials trade gap by 50%. It may prove tough over the next few years just to hold the trade gap steady.

What would’ve been handy is if the Government had not allowed the industry to shrink to the level it did.

Imagine if as a nation five years ago we had directly funded 200,000 homes. We could flog them off now and not just pocket the uplift in value, but also we’d have saved a fortune on benefits, gained on taxes and kept an industry and its skills readied for when it would be needed. Like now.

Am I bitter? Perhaps we all should be.