Two more construction forecasts came out over the past week that added to the consensus that suggests construction is set for strong growth up to the General Election.

Indeed, with the exception of the Hewes forecast, the view is that strong growth will continue well after 2015. 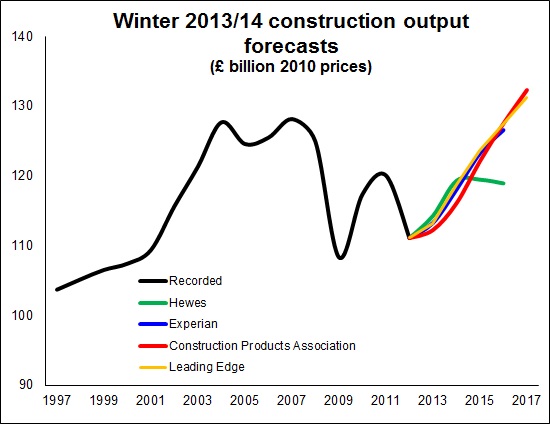 The Hewes forecast tends to embrace more of the downside risks and in that respect charts a more cautious approach to potential growth.

On that basis it seems reasonable to assume that it would take a nasty and a much unexpected economic storm to deny construction solid growth for most of the next couple of years.

The question then is: What happens after the General Election?

The view of three of the four forecasts covered in the graph, Construction Products Association, Experian and Leading Edge, is that growth will continue above trend through to 2016.

These three forecasts suggest that the end of the recessionary period is with us and, all other things being equal, the industry should by 2016 be on a much better footing with a few years of growth behind it.

It’s also worth noting that the Experian forecast says that the upside and downside risks over the forecast period now look more evenly balanced than at any time over recent years. Many of the bigger downside risks, such as a Eurozone meltdown, have eased.

But why then does the Hewes forecast appear to take a different tack after the General Election?

The first thing to point out is that these forecasts are based on the convention that there is no significant change in the current policy framework after an election, unless there is very good reason. These forecasters are not in the business of trying to guess which party will win.

Certainly looking at the timing it might be assumed that the Hewes forecast is suggesting a pre-election surge followed by a post-election squeeze. That would misrepresent the message.

Yes, it would be naïve to suggest politicians in power didn’t seek to pump up economic activity before an election. And there are plenty of reasons to suspect this is occurring now and helping to improve the fortunes of construction.

However, what the Hewes forecast seems to be suggesting is that there will be a pause for breath that checks the growth path after the General Election. There is no suggestion of construction once again falling back into a full-blown  recession.

What lies behind this suggestion is the need to address some of the more awkward imbalances currently in the economy. Added to this there are some negative structural problems which Hewes believes may inhibit growth.

The underlying economy is far from normal. The path of the Bank of England base rate is historically unprecedented. We have quantitative easing. We’ve Funding for Lending and Help to Buy. Compensation for Payment Protection Insurance misselling has recently pumped billions of pounds into consumer spending.

As the effects of these fade or the stimulus is unwound there is likely to be a drag on demand for construction.

Meanwhile the underlying economy is delivering a shabby performance on wage growth, exports and business investment. And, of relevance to the construction sector, we are seeing a revolution in retail that is seeing the virtual shop undermining the prominence of the physical shop.

These impacts on the economy, and more specifically construction, lead Hewes to forecast, among other things, a flattening out of private house building and commercial building in 2015.

This Hewes argues would lead to a check in the overall growth rate. But the impact rests very much on timing.

For my money there may be a bit more time for the industry to build up a head of steam before the full effects resulting from resolving these issues bears down on construction growth.

But, the key point that is emphasised by the Hewes forecasts is that troublesome issues remain and there is significant uncertainty over when and how they will actually be addressed.

That said, it will be a reassurance to the much-bruised construction industry to have a set of forecasts all revised upward.