Don’t panic. Construction is still growing. The first estimate of gross domestic product may show that quarter on quarter construction output was down 0.3%. But there’s no reason to suggest underlying growth has stalled.

Getting obsessed with a single quarter’s figures, let alone a single month’s figures in construction is a bit… well… obsessive. 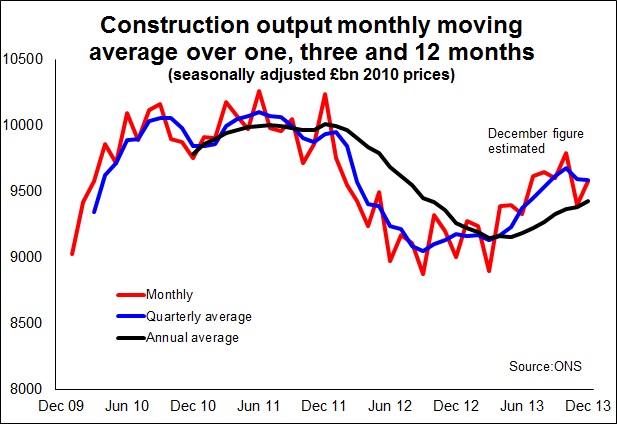 The graph shows clearly how erratic monthly data are and how, even averaged over three months, the figures still bounce quite a bit. Looking at this chart you’d have to be a real pessimist to see construction activity flagging.

Here are four points that I think should be noted in relation to the latest construction estimates in the GDP data.

The first point is that the data are very preliminary and will be revised. They could well go up and you may well find that the fourth quarter was flat rather than down. Then again they may be revised down.

The second point is that the construction industry is very hard to measure. Things like seasonal adjustment and inflation are extremely hard to get right so they can cause distortions from reality. Furthermore there are uneven lags in the data caused by the difficulty of collecting consistent responses from businesses, so the monthly data are in effect in blurred vision.

The third point to note is that construction is a pretty lumpy business and big swings are not unusual.

But there is, at the moment, a fourth point I think is very important to bear in mind – restocking. That is to say the amount of output needed to lift the amount of work in progress, within the production pipeline, to a level that better matches the expected level of future demand.

This is going to have quite a big impact on private housing at the moment given the sharp rise in expected sales. The impact will be even greater if the stock of homes for sale had fallen sharply just as demand from Help to Buy kicked in. Not only will firms have had to be doing more work to finish more homes to sell, but in the early stages they will have been doing more work to increasing the amount of infrastructure and part-built homes in the pipeline.

Sure enough the figures provide some support for this notion. You see an impressive near-10% rise in private housing output between the first and second quarter of last year, before a more subdued rise in the third quarter, with activity flattening out a bit by August.

This surge of activity is consistent with house builders suddenly opening more sites and starting many more homes to meet the pace of future demand.

There was a similar jump pattern in the commercial sector between the second and third quarter when output jumped by almost 7%, with growth calming a bit in the autumn.

Now restocking the production pipeline will not be the only thing at work here. It may not be that much of a factor. But it could be. A step change in production levels can cause a big surge in work on the ground, so it should not be surprising that we saw such a surge and then a subsequent easing in growth.

Taking all the above points in to account it seems pretty clear to me that we have to look beyond monthly and even quarterly figures to appreciate the underlying growth pattern of construction at the moment.

For what it’s worth, my take is that the industry hasn’t stalled it probably just expended a lot of effort earlier on in the year building a platform for growth in the future, so bulking up the second and third quarter output. I suspect there is reasonable underlying growth and most other indicators would seem to support this view.

Just how sustainable and strong this underlying growth will prove in the longer term is another question. There are plenty of problems ahead yet and awkward issues that I suspect will remain unresolved until after the General Election.

But I’d be surprised if for the next year or so the industry, as measured by ONS, didn’t show pretty reasonable growth, even if it the rate of growth does bounce about a bit.