The latest batch of industry forecasts are emerging and they show construction locked in a deeper recession than previous expected.

The recovery now looks further away. Top graph shows how the industry appears to be facing a pretty deep and protracted second recession. 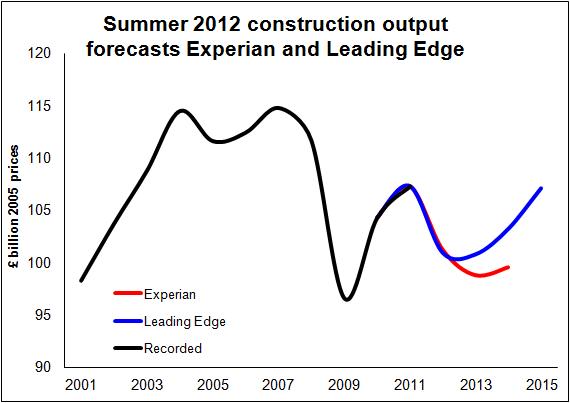 Leading Edge also cut its forecast compared with the one it produced six months ago. But it still remains conditionally optimistic of a strong bounce back in 2014.

These downward revisions should come as no surprise.

Construction’s future has been tied to prosperity in the private sector since the Government swung the axe at investment spending. 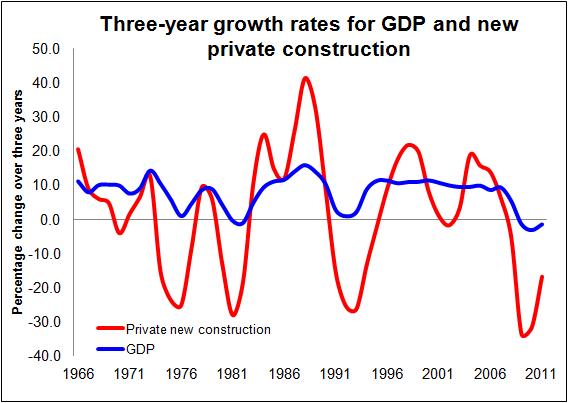 The pattern is pretty clear. Where there is little consistent growth in the economy private construction suffers badly.

We have seen not only the economy weaken of late and fall into recession, but also expectations of economic growth consistently revised down.

This downward revision of the economic outlook is consequently reflected in the latest forecasts. These show far weaker growth in the big private sectors (housing and commercial) than in earlier forecasts.

So whereas Experian had looked in the spring to the commercial sector for growth in 2013 and 2014, it now expects that sector to drag down construction.

And its hopes of a fairly strong recovery in private sector house building, have been replace by two years of very modest growth.

There is a similar pattern of downward revisions within the Leading Edge forecast. However it has also revised down its expectations of new public sector non-housing work.

Now, while these forecasts have been revised down, it should be noted that the risks still are weighted very much to the downside. If the Eurozone goes pop these forecasts could end up looking very optimistic.