The latest construction output figures suggest the decline is the industry is gathering pace.

Yes, we’re experiencing even odder weather than usual. Yes, there are odd effects from this Jubilympic summer of sport and celebration. Yes, there are always things that disturb neat like-for-like comparisons. 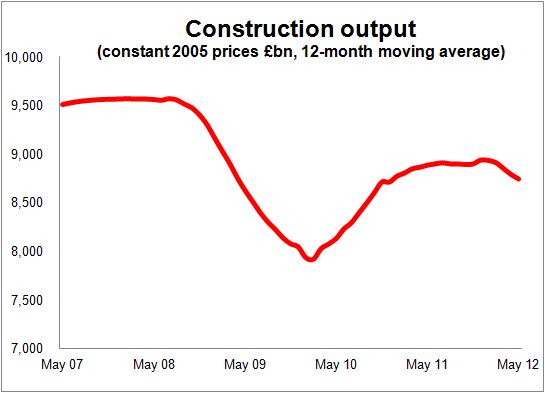 But the data now seem hard enough and squeals from major contractors loud enough to suggest that construction activity really is heading south at a worrying pace.

That broadly is what the output figures point to, as the top graph illustrates. What we see is activity flatlining from around spring last year before taking a nasty downturn early this year. And that decline has continued.

But while the graph tracks the 12-month moving total for all output, what it doesn’t show is what lurks beneath those figures.

The hope, or should we say the Government’s plan, was for the private sector to fill the gap left by a rapidly retreating public sector. And there were signs as 2010 progressed that this might be happening. The second graph (I used this last month) clearly shows how, following a couple of stimulus-induced strong quarterly performances by the public sector, private sector activity picked up. 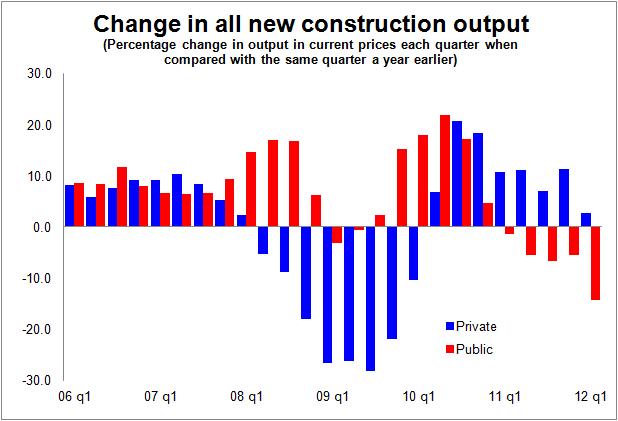 All seemed fine up to the first quarter of this year. But when the expected acceleration in the fall of public sector work happened the private sector failed to respond.

Looking at the figures for the first two months of quarter two, it seems that the private sector will again fail to support the industry when as expected public sector work continues to fall. If we examine this year’s contribution from April and May there’s a fair chance private sector activity might fall back in the second quarter.

Despite impressive sounding increases in home sales by the major house builders, hopes of a revival in the private housing market appear to be fading. The may be growth on the horizon, but output in recent months has been below that of a year ago and the starts figures do not sound all that encouraging.

The real unknown is just how much work there is in the pipeline. Orders for new work have been desperately low since the heady days before the financial crash. The level has been running at about two thirds of peak for almost two years.

This probably sounds worse than it is, because the peak will have been exaggerated by a large number of big, long-duration projects.

But whichever way you look at it if the volume of new orders remains low for a protracted period, as it has, this will drain contractors’ order books. This leaves open the question of where will the work come from to fill the gap left when many of the big projects won a few years ago come to a close.

The good news in the figures – such as it is – comes from the repair and maintenance side. This seems to be holding up more firmly at present.

But looked at cynically the better new is probably in the politics. Today’s figures (and probably the quarterly figures published next month) will strengthen the case being made for Government action to pump up the volume of construction.