The Government’s intervention to boost infrastructure spending is timely. The construction data is almost all pointing in a southerly direction.

The latest construction activity survey from the surveyors’ body RICS, released today, suggests workload among its members shrank in the second quarter.

This downturn in the RICS measure follows a rather more upbeat report just three months ago. 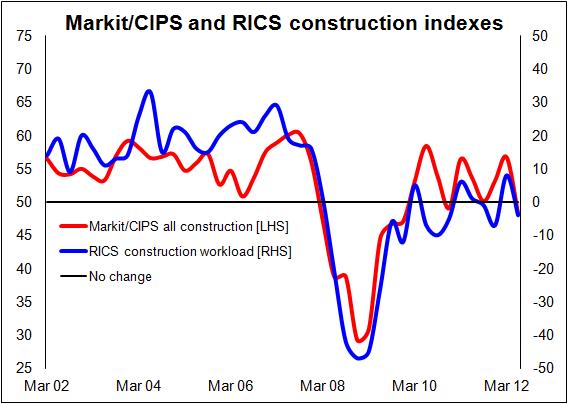 But as we see from the graph the construction market from the surveyors’ standpoint has been volatile to say the least.

I have also plotted the Markit/CIPS survey results for the final month in each quarter. This shows a similar pattern albeit more optimistic.

Both these surveys may well, given their samples, have a bias towards the more established, larger end of the construction market, so this should be taken into account when reading the data. They may well have a London and South East bias too.

It’s also worth noting that the RICS survey does tend to be a lead indicator of work on the ground given where its members are concentrated in the supply chain.

But for all that the message is clear. The construction market is in a fragile state and it may be more fragile than this data suggest.

The latest output data and recent forecasts would provide support for that view.

So anything that can boost potential activity will be helpful. In that context George Osbornes announcement this morning is welcome, but should be treated with a high degree of caution.

As Noble Francis economics director at the Construction Products Association has pointed out, the big figures provided by the Chancellor look impressive, but there’s no guarantee that the problem really is simply about securing credit.

This point was raised by the former Monetary Policy Committee member and highly-respected housing report author Kate Barker when asked by Stephanie Flanders of the BBC about the various Government lending support schemes.

Ms Barker declared herself hopeful but not certain that they would work.

“One of the things we will learn as this scheme gets into operation is whether the issue is on the supply side – i.e. what banks want to lend –  and how much or on the demand side,” she said in the debate on Stephanomics (13.30 mins in). “So are there really small firms with viable business plans who want to borrow?”

Certainly the evidence that there are long queues of would-be expanding firms desperate to get their hands on loans seems far weaker than the political rhetoric might have us imagine, at least when it comes to lending to small and medium enterprises (see this blog from last November).

So, turning to the tag of £40 billion worth of infrastructure projects put on this morning’s announcement, it looks impressive. It is meant to.

But before we leap to the wrong assumption that this is extra work that would not have been funded otherwise, there are at least two questions to ponder. Firstly, will the full allocation be taken up? Secondly, what proportion of the funders who do take up the offer and are successful would have gone ahead with their projects anyway?

This initiative should help at the margins, but we will have to wait and see just how impressive it proves to be and whether it matches the challenges the sector faces.

My suspicion is that it will not provide very much help in real terms.

But for me the real lesson from today’s announcement is that the Government is beginning to more clearly recognise the urgency of getting construction back into growth.

Sadly of late we have had pronouncements of construction initiatives on a near quarterly basis from this Government that hark back to the Victorian era and promise building revolutions of epic proportions. Had these all lived up to their billing the construction industry would now be scratching around for resources rather than wondering what to do with those lying idle.

The issue would seem to be one of policy credibility. This is perhaps ironic given the store George Osborne consistent puts in how the Coalition has delivered for the nation a hard-won fiscal credibility.