There seems to be a fair chance the Office for Budget Responsibility’s view of the housing market may be badly awry.

Why would that be that bad?

1. Because it potentially supports a complacent attitude among policy makers towards problems within the housing market.

2. Because it may well leave the Chancellor a few billion pounds light on stamp duty in a few years time.

But before galumphing into why the OBR may be wrong it’s worth making a couple of points.

Forecasting is in many ways a mugs game. The chances are that you’ll be wrong, even if your reasoning is broadly correct. Furthermore, if you do end up predicting the right result there’s a high chance you got there despite making duff assumptions.

That doesn’t make forecasting pointless, far from it. You need something to guide the way in murky times and someone has to do it.

So when I took a sharp intake of breath as I looked at the latest forecast from the Office for Budget Responsibility in the light of trends in the market I did so with some sympathy rather than incredulity and indignation.

Also, I’m not saying I’m right and it’s wrong. Frankly no one “knows” the future. And it may be that someone scrutinising this blog may find my assumptions are skewiff or that I’ve messed up my numbers.

Anyway, to the main point.

I have a horrible sense that the good folk at OBR remain over optimistic about the performance of the housing market, despite growing evidence that we may be in for a more protracted slough than their figures recognise.

And my crude calculations suggest it is not unreasonable to expect a hole of £2 billion or more a year in the residential stamp duty line.

While I’m a fan of the OBR, it has been over optimistic before on stamp duty (see blog) and found the need to adjust at a later date.

Anyway, to unpick the problems it’s worth starting with the OBR’s position. It is summed up in the first graph which shows transactions returning toward what is assumed to be the trend. 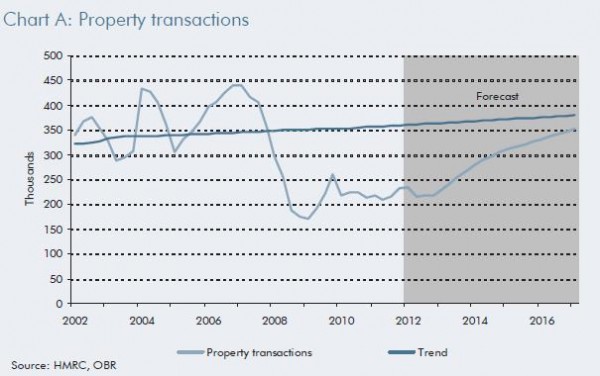 The supporting text states: “Our medium-term projection of property transactions are conditioned on a return toward the long-run average rate of turnover in the housing market – which implies owner-occupiers move once every 19 years. The depressed current level of transactions is consistent with owner-occupiers moving only once every 30 years. We are forecasting a relatively slow return to the long-run average, which is not quite complete by the end of the forecast period. By this time, and despite strong growth rates, the level of property transactions is still around 20 per cent below the pre-crisis peak.”

That seems fine. Taking a revert-to-trend approach is common in forecasting. It’s a reasonable approach if your assumptions on trend are correct and there’s no obvious reason to think there’s been a significant shift in the market. 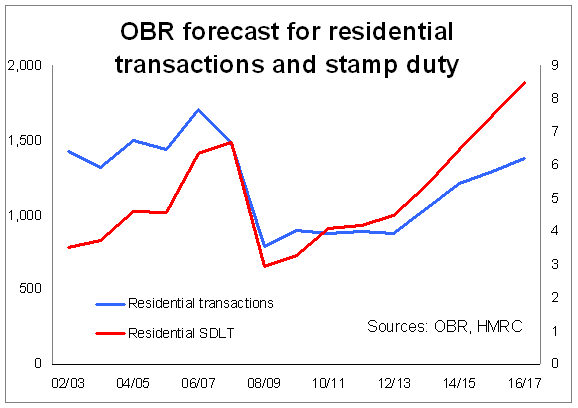 That’s where alarm bells ring. It sounds very optimistic (see the second graph). How will the Treasury raise £1.8 billion more on 20% fewer transactions?

I am not the only one to raise an eyebrow at these projections. For instance, Gráinne Gilmore head of UK residential research at Knight Frank points to the optimism inherent in the OBR forecast in her post Budget blog.

Let’s look at the numbers by comparing the situation in 2007/08 with that in 2016/17, when OBR forecasts there will be about 27% more revenue in residential stamp duty.

The determinants of the stamp duty take are, broadly speaking, the number of transactions, their value, the levy on those transactions and the ability of the tax authorities to collect the tax and close loopholes.

So starting with 20% fewer transactions isn’t helpful to the OBR case, but what about the value of those transactions?

Looking first at house prices, OBR’s own forecast suggests they will be roughly at the same level as at the peak of late 2007 in nominal terms. So broadly equal across the two periods we are considering, but it could be that the proportion of high-value homes within the mix of those sold will be higher in 2017 than in 2007.

Now let’s consider the changes to the stamp duty regime between 2007/08 and the latest Budget rates. I have tried to be “generous” on the impact of these changes when drawing on the estimates within the Treasury and OBR documents. For reference, the figures are based on post-behavioural estimates.

Comparing the regime in 2007/08 and what is currently proposed for 2017 the main differences (there are other minor differences) I see are:

The introduction of a 5% rate on homes priced above £1 million introduced in Labour’s last Budget. Let’s estimate it might be worth an extra £300 million by 2017 based on the £230 million uplift estimated for 2012/13 in the Budget figures.

The 2011 Budget brought a tax avoidance pledge. This might raise £50 million a year more.

But that Budget also brought relief on bulk purchases. This might mean about £150 million a year less.

The latest Budget brought us 7% on £2 million plus homes, which the documentation suggests should net an extra £300 million annual by 2017. And we had the loophole closing measures on company scheme to avoid stamp duty on house sales. This move should net £75 million.

Add and subtract accordingly and I get near as damn it £500 million.

Now, assuming there’s not miscalculation on my part or other significant factors I’ve missed, the scale of those changes doesn’t provide comfort in the OBR forecast, given that transactions are down.

The mix of homes sold would have to significant shift to hit the £8.5 billion estimate for residential stamp duty.

In the OBR’s favour there is a shift in the mix of homes in the market underway, as sales activity moves both southward and towards richer buyers and sellers.

However, this shift comes with an obvious constraint on the numbers of transactions and throws into doubt the assumption that 50% more homes will be traded in 2017 than currently.

So it all looks to me a bit shaky. But this is where I have to go a bit further and question strongly the assumption of trend in transactions made by OBR. 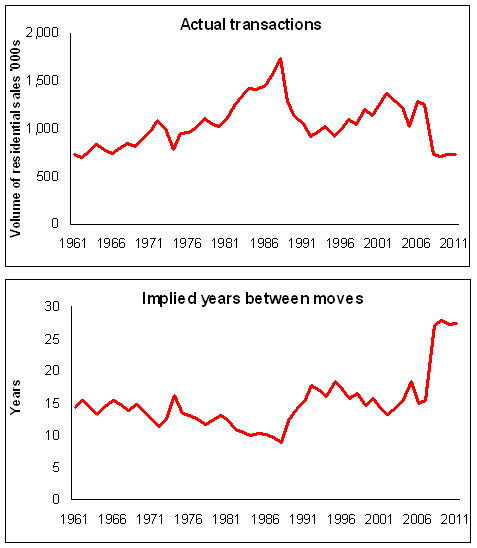 Look at the final two graphs. This is an update by me of data provided for the Housing Market Intelligence report 2008 by Richard Donnell of Hometrack.

Call me Mr Glum, but I see a downward trend in transactions from the late 1980s when I look at the first of those two graphs.

More worryingly, looking at the response to the previous heavy housing recession in the 1990s (see the final graph), it is tempting to suggest we may have to consider hysteresis, whereby after the shock of a housing crash the system is not returning to its historic position. This would throw into doubt the revert-to-mean assumptions implicit in the OBR forecast.

This may seem fanciful and, while I could postulate in pub-chat fashion an argument to support it, I’m not sure what might actually lie behind this effect. But, for me, it’s equally as plausible – if not more so – as the OBR forecast of a rising trend in transactions.

So unless I have missed something, from where I sit the OBR forecast seems optimistic with the spread of risk very heavily on the downside.

Now I would not blame the OBR for being wrong, if that were t prove the case. But perhaps I would have been more comforted if there were a bigger health warning on that particular bit of the forecast.

Because it does seem to me quite possible, if not probable, that George Osborne, or his successor, will have to find at least £2 billion if not more to fill the hole left by lower than forecast residential stamp duty receipts.