Much fuss is made over the monthly ups and downs of housing price indicators. But in reality those released recently suggest the average UK house price remains more or less locked at the steady altitude it has followed for more than a year.

Taking a consensus from the plethora of available measures suggests an average home costs you today within 1% (probably 1% less) of what it would have cost a year ago and more or less the same as it would have cost two years ago.

The first graph shows a selection of measure of annual inflation in the UK housing market. It shows that house price are on average pretty stable prices in cash terms. 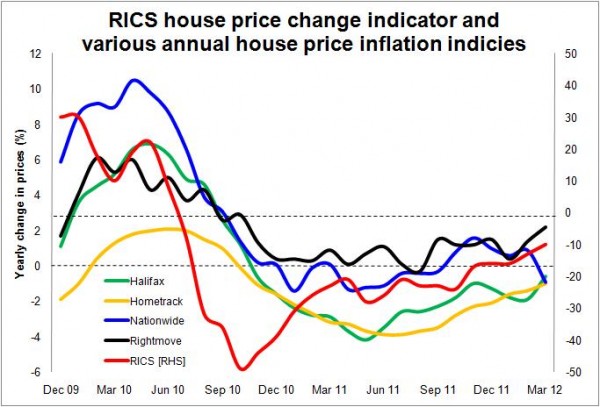 In real terms, however, homes are getting cheaper as inflation eats into the nominal price.

The Government will see this as good news.

It fits the pattern housing minister Grant Shapps says he wants to see over the coming years. He wants house prices to be stable while earnings rise. He doesn’t want house prices to plunge.

And luckily for him, short of hitting an economic iceberg, there seems to be little on the horizon that will disrupt this current holding pattern of stable nominal prices and real-term house price falls.

Even the normally bullish housing experts at the CEBR economic consultancy have been shaving their forecasts for house price growth in recent times. They now see house prices rising less than inflation over the next two years.

Meanwhile City traders in future house prices see the average house price in cash terms down a bit in the coming year but back to the current nominal price in two years time, according to the latest Future HPI produced by Peter Sceats & Associates.

At first sight stability in nominal house prices seems a reasonable aspiration and a desirable outcome. No nasty crash, negative equity contained and a gradual improvement in the balance of earnings to house prices.

That is all very encouraging. But it ignores some very disturbing downsides that get far less publicity than trivial ups and downs in average house prices.

Before getting to the disturbing downsides, it’s worth examining a couple of points relating to the indexes and their limitations.

Firstly, special factors impact on the data. So, among the various market interventions, the ending of the stamp duty holiday for first-time buyers will probably have had a short-term upward impact on the indexes. Meanwhile, milder weather so far this year probably also supported prices.

Taking the various factors together, it’s probably fair to assume the indexes are reading a bit higher than they might otherwise.

Secondly, interpreting “average house prices” can be problematic. Averages are useful statistical devices to get a feel for a central tendency and to boil down to a simple number what’s going on. But averages, particularly the commonly used arithmetic mean, can disguise detail and lead to misleading interpretation.

A mean value for house prices, however smartly weighted and adjusted, can and does disguise important changes within the spread of house prices. So, if expensive homes get more expensive while cheaper homes get cheaper, the average might suggest no change despite an important shift within the market.

Indeed, this appears to be what’s going. Closer examination of the data shows prices rising in the more affluent and expensive south, while prices are falling in the cheaper more cash-strapped north. Even within local markets we see a divergence of fortune, with expensive enclaves outperforming many cheaper locations.

This is not a surprise. The second graph taken from the latest housing market survey by the surveyors’ body RICS illustrates this point vividly. 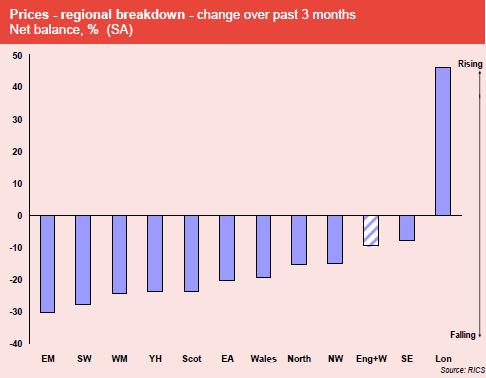 The graph doesn’t however show another divergence in the mix, the difference between buyers today and buyers in the past. The average buyer today is likely to have either much higher income, or much more housing equity, or both than the average buyer before the economy went pear shaped.

These are important differences within the market that get lost when we just look at averages.

It’s not worth getting too hung up on this point. The important thing is to recognise that house price indexes are basically derived from data on homes actually bought and sold and that mix of homes and, indeed, the mix of buyers can change quite markedly over time.

For all that, the “average house price” has meaning, even if it isn’t what you thought it was. It’s a rough guide to what’s going on in the market.

And from the latest data it’s fair to say that prices are not plunging despite the fragile economy and a widely held view that houses are overpriced.

The Economist magazine, for instance, currently rates Britain’s house prices as overvalued by 22%. This is despite a fall of 10% since 2007 and the value being eroded by general inflation.

If the Economist is right, and house prices are overvalued, this is intriguing given the weakness of the economy.

And for me, as I will explain, the continued high price of housing remains a severe drag holding back house building and is a major hurdle to a more balanced housing market.

High house prices and the limits on funds available to borrowers have profoundly changed the mix of buyers in the market. As was said earlier, buying houses has become skewed more towards richer people (either the bigger earners or the wealthier) than it was before the crash.

In simple terms the current market is excluding from homeownership more young people and more lower and middle-income people. The pool of potential buyers has shrunk. This implies fewer sales. This in turn suggests, as we shall see, fewer new homes built.

A huge amount of the blame has been heaped on the lenders for being parsimonious. But if we compare today with 1997 when a recovery from the previous housing crash was becoming established the figures paint and interesting picture.

So relatively speaking lenders are lending more new money today and have much more money in the game than 15 years ago when the market was beginning to heat up.

The problem is that houses cost much more in real terms than they did in 1997. Depending on which index you choose and what rate of general inflation you pick, homes now cost between 50% and 100% more after inflation is taken into account.

Naturally with limited cash to go around lenders will favour the less-risky better off. This further reduces the number of loan approvals, because richer people can afford bigger mortgages and more expensive homes.

And then there is the buy-to-let market, which seems to be taking off again and is taking almost 10% of the mortgage pie.

Looking to the future, it’s hard to see how funding will improve markedly, which suggests that the number of buyers will remain constrained.

The question then is whether this low level of effective demand (buyers with cash to buy) will press down on prices. The simple answer is yes.

But we have then to take into account the response of sellers. What seems to be happening is that as prices soften many sellers leave the market or steadfastly refuse to accept a price below their aspiration.

With interest rates at historic low levels fewer sellers are under pressure to sell than might otherwise be the case. Many choose to stay put rather than trade up, down or sideways and some choose to let out their existing property rather than sell it.

This mechanism of supply rapidly responding to match the demand does seem to be what lies behind the stability house prices.

Naturally the pattern is not even. Where demand is strong prices creep up, while in locations of poor demand prices fall. But the ability and willingness for many sellers to hold off from selling is keeping house prices elevated.

Now, the consensus among economists is likely to be that relative stability in house prices is a good thing for the economy as a whole. A house price collapse could have all manner of nasty outcomes.

But stability comes at a price. There are disturbing downsides.

There is of course the increasingly publicised moral and political issue. Put simply, is it right that access to homeownership should become ever more restricted to the older and better off? This question I will leave hanging. It is outside the normal remit of brickonomics.

Smack bang in brickonomics territory, however, is the disturbing effect that the current market mix is having on constraining house building at historic low levels.

We can expect mortgage approvals to remain at low levels for some time yet, for the reasons described above. This, however, in turn implies that housing transactions will remain low and that sadly points to low levels of house building. 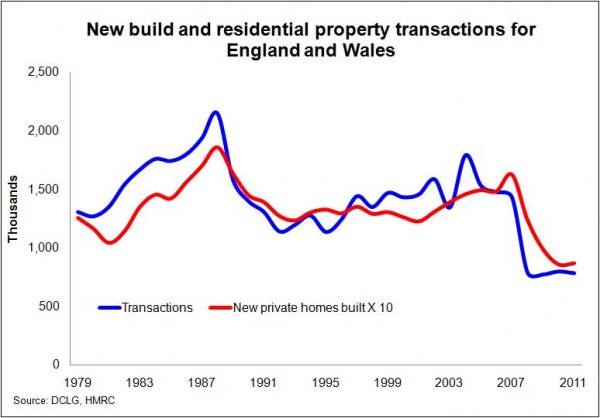 The exact reason for this is not well researched. But, interestingly, I ran some data kindly provided by Hometrack and found a similar pattern at regional level, although the ratios of new to second-hand homes sold appear to differ region to region.

Of some concern is that the regional data suggest fewer new-build homes are sold as a proportion of all sales in London and the South East, just where house building is increasingly focussed.

It may be that the current crop of housing strategy policies will break the relationship between housing transactions and new home sales. But to me that looks like a long shot.

If not we are left with a nasty problem. Relying on a market-led solution to house building will not (nor should it be expected to) drive a major boost in the number of new homes built. There is a market failure.

So once again, it is time for Mr Shapps to think more clearly and more ambitiously and find a real solution to boosting house building numbers.

My best offer is the one I have banged on about for ages which is to exploit the Bank of England’s Asset Purchase Facility to fund house building.

2 thoughts on “Average house prices may be stable, but the figures hide trouble”