Here’s a couple of graphs for stat-spotters I thought worth placing together.

For some while there has been unease about both the workforce jobs figures and the repair, maintenance and improvement (RMI) sector figures in the official construction output statistics.

The two sets of data are linked and there’s been some concern that an under recording of foreign workers was impacting on the workforce jobs figures and in turn on the RMI data, as Labour Force Survey data is used in estimating the level of RMI output.

A comment to an earlier blog prompted me to plot the new work and RMI output data along with jobs. What is interesting is the rather unexpected drop in RMI output in from the start of 2004. 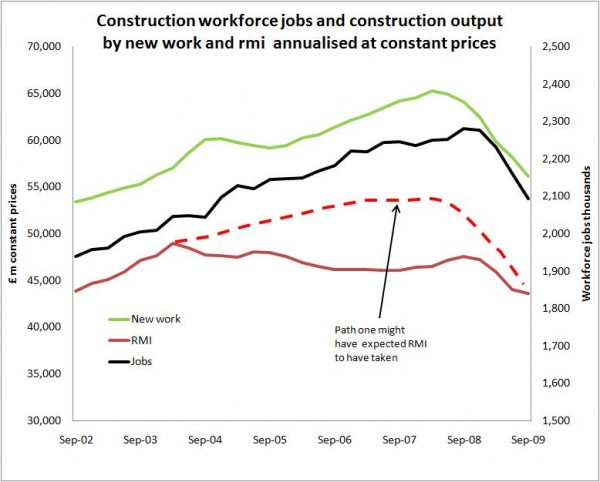 So I thought I’d check what estimates there were for the number of foreign workers in UK construction.

I found a very useful publication from the think tank ippr called Building a New Home: Migration in the UK construction sector. The graph below is taken from the report and shows foreign born and foreign nationals in the construction workforce (population of working age), 2000–07. 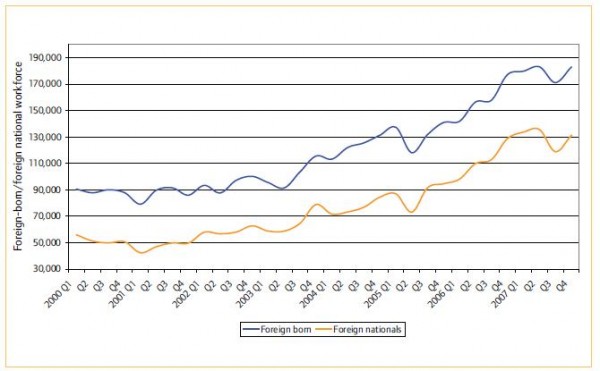 My guess is that the estimates ippr makes of the foreign contingent within the UK construction industry may be slightly on the low side, but that is not really the issue here.

More interesting is that “take off” in migrant workers within construction appears to correspond quite closely to the point at which the RMI figures start to look a bit strange.

For fun I put a very rough line in to suggest where one might have expected RMI output to have gone given the state of the economy. That’s the red dotted line.

Now this is all speculation, but if the figures are wrong and there were more foreign workers in the UK construction industry the policy makers are as a consequence being misled.

The likelihood is that they are being given a picture of the industry that understates the height of the boom and the numbers employed and probably a picture that understates the scale of the fall into recession and the real loss of jobs, as the jobs figures seem to suggest that the losses are heavier among migrant workers.

This is a complex area and measuring the level of overseas construction workers in the UK is far from easy, but hopefully the graphs provide some food for thought.

One thought on “Is an inaccurate measure of foreign workers messing up the construction data?”