… and the need for urgent investment in the construction output statistics.

The latest output data from the Office for National Statistics have posed major problems for those seeking to interpret the path of construction activity.

The revisions to the latest set of data, published just over a week ago, were so bamboozling that even I couldn’t construct a narrative sufficiently tortured to describe what I saw. I was truly puzzled.

I might add, whether the figures show a rise or fall over the month is rarely of consequence in an industry as volatile and vague as construction.

What puzzled me were the major revisions and their shape. They added about £1.5 billion to the turnover in cash terms over the months March to July. That’s about 2.4% more over that period than was thought when the count was made a month earlier. The majority of the revisions fell in the infrastructure sector, boosting estimated output over that five months by more than 10%.

This led to much head scratching for me. My concerns however were nothing compared with those faced by the industry forecasters who were in the throes of putting their autumn forecasts together. Suddenly they faced the task of explaining a huge increase in the official estimate for construction and a huge increase in the estimate for new infrastructure work. That would rattle anyone.

So what caused such a large revision?

Put crudely and looked at from the outside the ONS seemed to have “found” almost £1 billion of new infrastructure work and a bunch of other work sometime after the previous month’s release of the July output data.

That left the forecasters wondering what it all meant. In fairness, the Quarterly National Accounts released at the end of September had warned of big revisions to construction output.

Revisions are a normal part of statistics series. These, the release said, were due to several factors, re-weighting and re-referencing the indices to 2012 = 100 to align with the National Accounts outputs and the incorporation of late data.

But this explanation left me with unanswered questions. I thought the shape of the revisions was very odd and my initial reaction was that a reclassification had occurred, or (worse) a nasty computational error.

Fortunately I now discover it was the former, not the latter, that lay behind most of the expansion in construction.

Having explored the issue more, but far from exhaustively, it appears in March there was a reallocation of a major business from the services sector to construction. When I say major I mean a firm turning over significantly more than £1 billion a year, probably more like £3 billion. The name of the firm is confidential, but the work of this firm had previously not been collected within the construction output data, but was allocated to services. It will, I am told, now stay within the construction sector.

(For those interested in the wider implications on GDP, they might wish to note that the services output will have shrunk as a result of this reclassification.)

However there are matters, important for those who take statistics seriously, that added to the confusion in the revision. The firm was introduced in March, but the value of its work was imputed. Unfortunately the imputed value used was very much less than the actual value which was later returned when its survey details were received by ONS. This led to an upward revision in the latest release being back dated to March.

So what we actually have is a structural break in the data series. And my guess – it is only a guess – it that it means that from now on construction will be of more than of £1 billion and more like £2 billion bigger (probably more than 1% anyway), with nothing having changed in the real world.

This is significant. But it is not unprecedented. Shifts of operations between the public and private sectors have caused similar things in the past. On a smaller scale firms in other sectors taking construction work in house or outsourcing construction work also alter the scale of what is cast as construction within the official data.

This major change will inevitably confuse and frustrate many people who rely on the statistics. It may also lead statistically illiterate or disingenuous politicians and lobbyists to a convenient, but wrong, narrative. 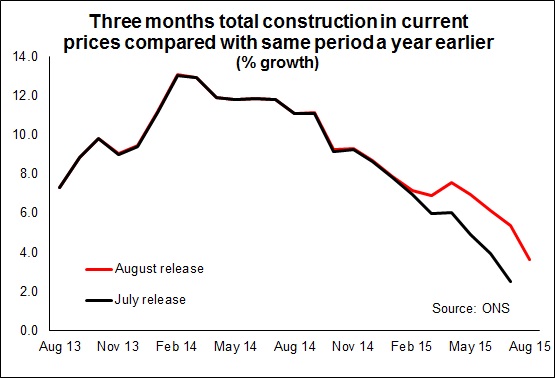 The significance of the structural break will vary with the analysis done. The chart I have used to illustrate the scale of the break shows it very distinctly. It is a comparison of the three months total of construction in current prices with the total over the same period a year earlier. The black line is what the data released in September showed, the red line is how it has been revised.

Naturally if we compared the latest release data for total construction with the previous release on a chart with the y axis set at zero the difference might appear quite small.

The point is that there is a structural change which has nothing to do with a change in the real world.

It is important always to bear in mind that the construction output figures do not measure construction as people in the industry might understand it. (For more on this you might want to the CIOB report The Real Face of Construction)

There is a further point of note. The ONS is caught within its methodological tramlines. These seek to ensure that it handles statistics correctly and consistently. However, there will be time when the methodology fails to accommodate quirks in the real world. The methodology can also viciously expose ONS to any errors. Many other surveys offer the scope for fudging, or discretion as we like to call it.

There are of course other problems with the construction output figures. Many. All surveys present problems.

This does not excuse ONS of all blame, not that I approve of the increasingly fashionable game in media and politics of “pin the blame on the donkey”.

Some faults obviously lie within the ONS. For my taste the organisation could be far more transparent and provide deeper explanations when there are changes or oddities in the data, especially when they are profound.

But many problems are not of the ONS’s making or, as some seem to suggest, connected with the move from London to Newport. There were problems brewing in construction data before ONS took on the task. The very nature of the industry was morphing, especially in ways that would inevitably make measuring construction output more awkward.

I do feel however that ONS underestimated the scale of the task when it took over responsibility for construction data produced from the start of 2010 onwards. I felt so at the time.

In my view the problems run deep and start with what it is we actually measure. This is not a glib comment. It is important.

Anyone who deals regularly in construction data knows how easily prone it is to being unreliable. It displays heterogeneity, volatility and vagueness in buckets.

Simply defining the industry in a consistent rigorous way is tricky, as the distinction between construction and other sectors is extremely grey. There will be a large number of professionals such as quantity surveyors, engineers and architects who might think of themselves as being in the construction sector. Most are not. Their efforts are counted in services, unless perhaps they are employed by contractors.

This brings me to the need to invest in improving the construction output data series.

Many will know that the ONS is working to build a robust long-term solution to the construction prices and cost indices. This is important work. These indices allow for a judgement of trends over time relatively unclouded by the effects of inflation. They broadly allow for comparison of changes in the volume of work rather than the current value in cash terms.

If, however, we don’t really know what it is we are measuring, I would argue we are in danger of putting a lovely gloss on rusty bodywork.

Tough research and analysis needs to be done to improve firstly the understanding of what is being measured and secondly how the survey data that feeds into the construction output data can be improved. This costs money and takes resources.

If we want to have decent construction statistics it would be far better to push for such investment as is needed, rather than sit on the sidelines, often with little understanding of the problem, and carp about how crappy the ONS is at producing statistics.

I think the construction industry should press for greater investment in what are its baseline statistics. That is, if it wants evidence-based policies guiding the way it conducts its business rather than having industry policy run increasingly easily on knee-jerk reactions to political prejudices and preferences.