The latest batch of statistics on the housing market have all been impressive, suggesting broad and strong growth in house sales and house prices.

The RICS survey out today shows that over the past few months there has been a sustained increase in all the main indicators. 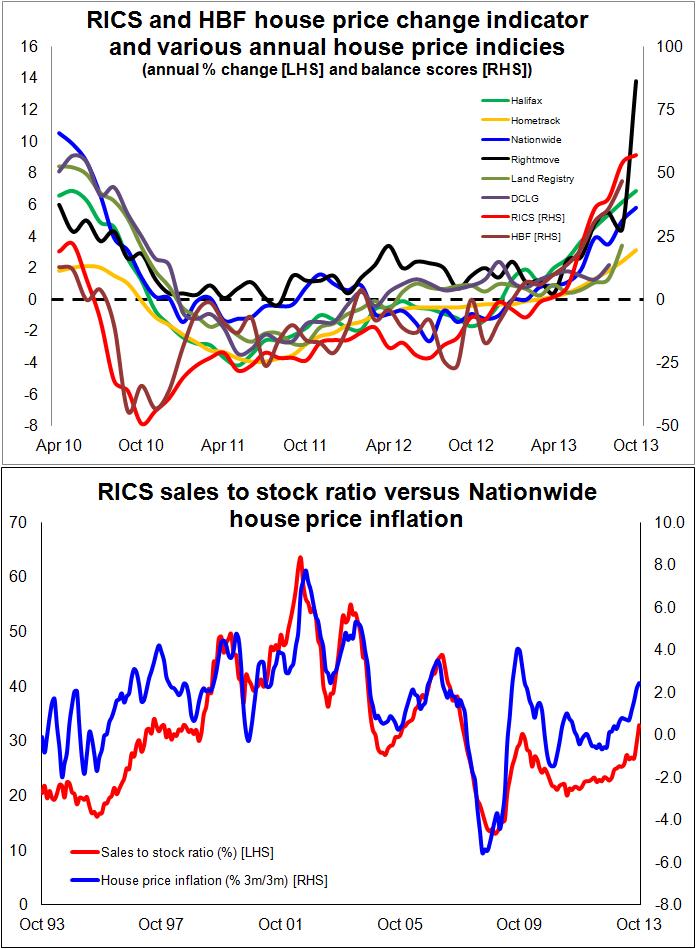 A hefty majority of estate agents have seen increases in achieved prices, they expect further increases, they have seen rises in enquiries from new buyers and instructions from new sellers, and their level of sales is rising.

Looked at regionally this buoyancy seems pretty broadly based geographically.

This survey comes as a day after the Prime Minister himself trumpeted success for the second phase of its Help-to-Buy scheme, which it says has seen more than 2,000 potential buyers accepted for a Help-to-Buy mortgage in a month.

It is clear from the vast array of house price indicies that house prices are growing faster than for a long time and price growth appears to be accelerating.

One of the measures RICS produces that I find very worth watching is the sales-to-stock ratio. This seems to me to provide a good gauge to the potential strength of price pressure.

As the lower graph shows this has tracked closely the general pattern of house price changes.

Importantly it has taken a rapid turn upward and gives the feel of a corner being turned sharply.

A most intriguing element of these data was that buyers appeared to be increasing in number in London, the South East and East Anglia while there seemed to be fewer sellers, at least in October.

This all points to continued upward pressure, particularly where there is already most price pressure.

There will be many who think a hike in house prices is a good thing. However, it presents real problems.

House prices remain by any sensible measure high by historical standards. The reason that so many people can still trade up is down to pretty low interest rates. To rebuild a vibrant market they need to fall against earnings.

This was the aspiration of the Coalition’s first housing minister Grant Shapps when he took the reins. He sought stable house prices with rising wages. It was happening, albeit slowly.

It seems no longer to be a policy ambition of the Coalition and and house prices are clearly rising with increasing speed. If they rise too fast they will further damage an already pretty dysfunctional market.

Even if you are someone who celebrates rapidly rising house prices, a sharp acceleration is not what you should be hoping for. If prices rise too quickly then the pressure will come to clamp down on the Government incentives. That could spark an end to the current party.

Either way this recent burst of price rises and increased sales needs to be watched carefully.

There may be cause in many quarters for optimism, but that should be balanced with a high degree of concern.