The latest monthly construction output figures from the ONS for January provide little to surprise those who have been following their progress of late. They remain horribly worrying.

The figures show construction output in January adjusted for inflation down 6.3% on December and 7.9% down on January 2012.

Given there is no seasonal adjustment, it is best to measure output adjusted for inflation on a 12-month-rolling basis. On this measure output continues to slide with the annual size of the industry falling about £600 million in January. 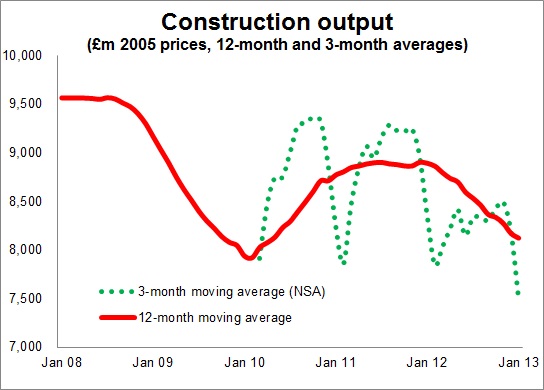 The figures are pretty much consistent with suggestions by forecasters that we’ll see a decline in output this year.

But what is more worrying still is that the private sector is failing to show signs of life. The massive commercial sector in particular continues to grind downward. The sector was worth on an annualised basis £24 billion last January. It is now worth £21.5 billion.

The extremely disappointing figures have however created an upside for the industry. There have been increasing noises made of late by lobbyists, commentators and economists about expanding spending on infrastructure and housing.

Sadly these calls come rather late in the day and the solutions presented are often generic at best and very ill defined at worst.

Indeed they present a real danger that political expediency, the whims of economists poorly informed on the workings of the construction sector and pressure from lobbyists representing interested groups will drive the agenda, as sense departs and panic to patch up the grotesque growth figures takes over.

This, sadly, would be all too typical. We should have been spending time long ago working out where, when and how to spend money to build those things we really need for the future.

Let’s by way of example look at why the nation should be building more homes now.

Firstly while there may be low market demand, there is plenty of evidence of need.

Secondly if you are going to need homes in the future it is worth building them now rather than later and here’s a quick argument as to why.

Crudely speaking labour represents about £40,000 in building a typical house. But you can pretty much halve that cost for the Government during a recession, because it will be taking people off the dole and out of benefits and those employed will then be paying employment taxes.

That kind of back-of-an-envelope calculation ignores the notion of the multiplier effect which is big with construction because it gets money to people who spend, it generates activity in other parts of the economy and it retains a skills base which makes future work more efficient.

Now here I must confess to getting a bit irritated with lazy thinking and the sadly fanciful precision given to the calculation over the exact multiplier effect from spending £1 on construction. The truth is that the iconic £2.84 per £1 spent may well actually be an underestimation of the impact of construction in a recession, because (lo and behold) the multiplier effect is bigger in recession.

But, back to the growing case being made to spend more money on construction, my instinctive reactions are:

1) great, let’s get spending on construction and hang the debt because you’ll have an asset to back it up;

2) how best and how effectively can we spend that money?

3) this is a great opportunity for construction to shine as an industry.

But my excitement is tempered, because some time ago I and others took the cracked record calling for sensible spending on construction off the turntable out of boredom and fear over my insanity. Though it gets a nostalgic hearing once in a while.

Insanity, they say, is to continue to do the same thing and expect a different result.

For the past four to five years I and others have banged on about the need to invest in construction as a mechanism for growth and as an opportunity to get fantastic value for the taxpayer. Nothing of note has changed.

Rather than repeat again my argument, can I just point you to one blog from October 2008? The thinking here I believe still holds, although the context will have changed.

The main point is that while spending on construction is good, just chucking money at it can be counterproductive in the long run.

I genuinely fear that a Government bereft of sense will listen to and base its policy on the ideas pushed by ill-informed economists or the lobbyists for interested parties. That is a distressing thought.

Fine this would lead to more construction. But we would miss a once in a generation opportunity to prove the point that spending on the right buildings and the right infrastructure really is a route to prosperity from depression.

3 thoughts on “Construction continues to tank, but we need a considered response not knee-jerk policies”