Recent surveys of the housing market by the surveyors’ body RICS have become increasingly positive in tone and are finding increasing signs of life.

There are some promising signs in the findings for house builders and the construction industry.

Inevitably the popular focus falls on price changes, with rises seen as a sign of an improving market. Here the RICS found stability taking the nation as a whole and its members were modestly bullish about the prospect of prices rising over the coming 12 months. 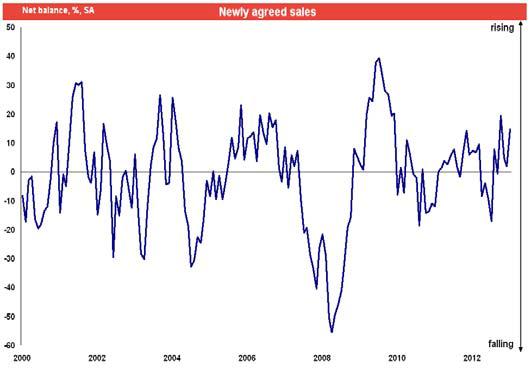 But the picture is fragmented with London and the South East still positive while prices sag in most other parts of Great Britain, though Wales appears to have put in a positive showing of late.

For house builders and the construction industry probably the last thing they really want is rampant house price inflation. Yep, there’s a short-term gain for house builders, but in the long term a sharp rise in house prices now would make a bad situation worse.

Stability in prices is probably the best house builders and the construction industry could ask for to balance its short and long-term aspirations. So the survey is fairly reassuring on that front. 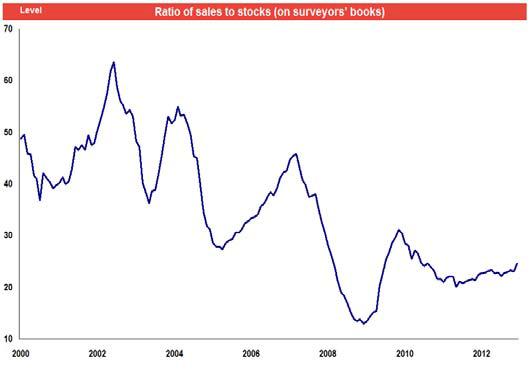 What is encouraging about the survey is that sales activity appears to have increased. This finding was in some way tempered by the drop in new inquiries from buyers and instructions for sellers in January, but RICS put this down to the bad weather.

The trend is sales does seem to be upward if we look at the first chart showing newly agreed sales. There was a rise in January from +2 to +15 in the balance between agents seeing fewer and more sales.

Equally encouraging is the trend in the neat metric that RICS uses showing sales to stock, shown in the second chart. Historically this has been a fairly good indicator of confidence in the market. The trend has been upward for some months.

More than any other factor, the thing that will drive private house building, in my opinion anyway, is an increase in transactions. The link between private sector completions and housing transactions is very strong.

So if the RICS survey is an accurate picture of the trend in sales we should be a little more content. But there’s little reason to get excited. 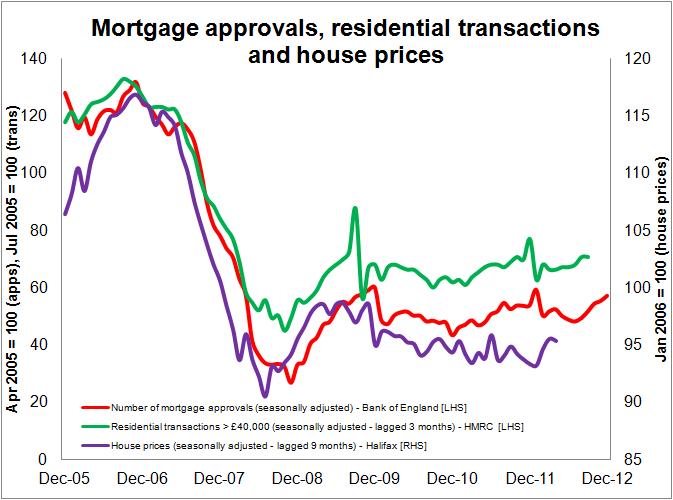 The final graph, one I regularly use, tracks three indicators .The lead indicator is the number of mortgage approvals, slightly lagged by three months is the level of residential transactions and then we have house prices which I have lagged by nine months.

We can see here, partly because of how I have arranged the axes, a degree of correlation that suggests a linkage. But for me what’s interesting, if you look carefully with an optimistic eye, is that we have seen a modest increase in mortgage approvals and a more tentative rise in transactions.

However more importantly what we see is how far off the peak we are. Being that far from past performance we might reasonably expect a much stronger bounce back.

What we also see from the latest data released by the Council of Mortgage Lenders is an increase over 2012 in the number of loans, particularly to first-time buyers. However a reasonable chunk of the overall increase in activity seems to be coming from a resurgent buy-to-let market.

So it’s clear from the data that the scale of recovery in the traditional private housing market is pretty limited in relation to historic levels of activity.

Furthermore, among a welter of other factors, we really should consider the impact that sustained low interest rates might be having on the market. Are people gradually becoming conditioned to the idea that interest rates will stay low for a long time, so are factoring in less risk of rising interest rates when they consider buying a home?

This is important. If interest rates were to rise, say, to their pre-credit crunch levels, the average first time buyer would need to stump up £200 a month extra to cover their mortgages. Indeed across the piece mortgage holders would have to stump up more than £20 billion a year between them.

If they saw rising interest rates as a risk before but don’t now, this will increase confidence in buying and be one factor pushing up the level of sales.

So looked at overall, while the fitful improvement apparent in the RICS survey may be seen as encouraging, we should remember that it is only encouraging because we are in such a deep hole.