The latest house building data show we have now endured the three worst years in England for new home completions since 1946.

The figures again underline the limpness of Government strategy in dealing with the housing crisis. 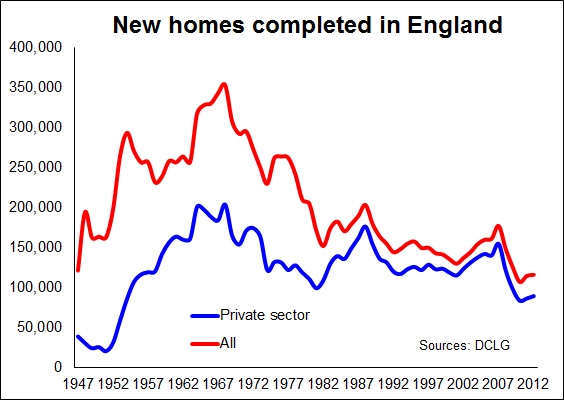 Given the projected path we set ourselves as a nation back in 2007, we should be building at twice the current rate. That I hasten to add is still well below the levels seen in the mid 1960s. But the quality would be a shade better this time around we hope.

Most measures of housing stress are flashing red. There’s a huge range of metrics you can choose from, such as overcrowding in the ever expanding private rented sector. That’s increasing.

But for a test why not go to Shelter’s website and its Databank? Check the “housing need” statistics. Save for repossessions by mortgage companies most other metrics show a disturbing rise.

There are many other manifestations of the dysfunctional market (if we are considering all housing as a market), leaving aside the desperate problems faced by those in most need and the death of housing aspirations among the aspirational.

We have seen a huge disruptive redistribution of wealth to the elderly. This corresponds with closing out opportunities for homeownership for ever more young folk, which combines uncomfortably with the poisonous and increasingly entrenched notion that one is not part of a community without owning a home.

To use street parlance the housing system in the UK is screwed. Its fissures run deep and they are widening as further cracks appear.

The current Government can no longer blame “the other fella”. It has been in power best part of three years now. It made big bold brash promises about how it was singularly well equipped to deal with the crisis. It used phases such as “radical and unashamedly ambitious” to describe its housing policy.

It failed. And it will continue to fail in my view unless it changes tack.

The Government’s failure was not unexpected. I was more polite and generous in print than in private when I read the November 2011 Housing Strategy. Then I asked “Was that it?”

But the narrative in the run up to the General Election did little to convince me that this administration was well equipped to deal with the issue. The focus on Open Source Planning missed the point and the emerging policy, the New Homes Bonus, was always little more than a sideshow rather than the road to a planning nirvana that its billing seemed to suggest.

Not that the incumbent Labour administration was sufficiently forceful in tackling the problem. In fairness it did much to soften the blow of the collapsing market. But it appeared lacking in ideas when it came to the longer term.

Across the political spectrum there appeared little real understanding of how bad things were and there were no credible policies put forward to rebuild the collapsed house building numbers.

The obsession with discussing national debts and assets in a way that presupposed they were analogous to those of households has not helped the nation one bit.

It’s crass to suggest that it is reckless to spend to invest when interest rates are, in real terms, negative and when the spending provides assets we know that we need for the future and that have potential value well in excess of the debt.

What’s more, investing as a nation during a recession can reduce unemployment and increased tax the take. Families and businesses don’t work that way. Also as a nation we have a central bank that can buy debt – oh of course it has. Print money as a business or family and you’re likely to get banged up.

Let’s leave my blunder into monetary and fiscal policy to get back to the real point. The scandal in my eyes is that the nation had a once in a generation chance to build huge numbers of homes at a massive discount. We blew it.

In 2008 I argued that the Chancellor (Alistair Darling at the time) should boost public spending by investing £20 billion of taxpayers’ money over two years in buying land and building homes earmarked for eventual sale – to the private or social sector.

If it had it could now be selling those homes, leaving the nation with a nice surplus to pay down the debt and reduce the deficit. Or it could be renting them to save on its £20 billion a year housing benefits bill.

Should taxpayers up and down the country not be going berserk at the Chancellor, then and now, for missing what both at the time and with hindsight looks like a dead cert way to have saved them money?

Can I leave you this to read while I take a rest from being very very annoyed?

It comes from the Institute of Fiscal Studies Green Budget 2013, Page 30.

“Simulations run on the Oxford Economics Global Model suggest that it would have been possible to boost short-term growth prospects through higher capital spending: an additional £10 billion of capital spending in both 2013–14 and 2014–15 would increase the level of GDP by almost 1% by the end of 2014 (see Figure 2.6) and, with stronger growth yielding higher tax receipts, the impact on the deficit would have been relatively small. We feel that this would be an appropriate level of stimulus – sufficient to yield a noticeable improvement in activity, but not so large that it damages the credibility of the government’s austerity plan (although our scenario does show an increase in gilt yields, which offsets some of the positive impact on growth from the increased infrastructure spending).”

Ok. I’m back and a bit calmer.

Well look at the history. Both in the 1920s and 1930s and in the 1960s when public house building was running high we saw more private house building.

We can do something about the low level of new homes being built.

The answer is simple. Build them.

Oddly enough that occurred to both Labour and Conservative Governments in the 1950s when the constraints of austerity and debt were if anything more pressing than today.