Construction output fell 2.6% in the third quarter of this year. This fall was slightly more than had been expected when the nation’s first estimate of gross domestic product was released.

For informed industry watchers this was no surprise. The fact that revisions by the Office for National Statistics to earlier data pushed the recorded level of output down still further was also not a surprise. 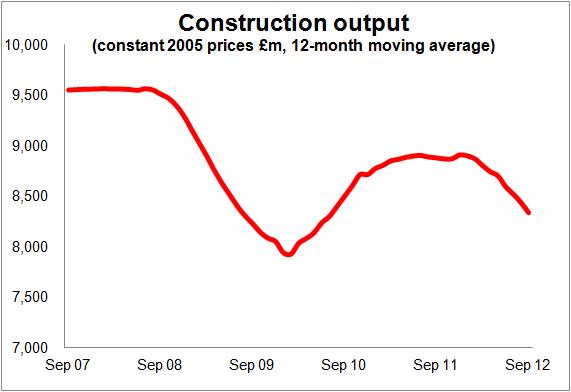 Measured on  a  quarterly constant-price seasonally-adjusted basis the industry has hit a new low in this economic downturn, falling below the 2009 quarter two trough.

We haven’t seen output at this low level since the 1990s.

And on the evidence of the latest output data and that from the new orders figures we should expect to see the industry plunge still deeper. Recent profit warnings, most notably from Britain’s biggest contractor Balfour Beatty, seem to point in this direction too.

As brickonomics has noted for some months, the industry (measured on annualised basis) is shrinking by about £1 billion a month and has been for the past five or six.

The top graph (measuring the 12-month moving average) shows that rapid decline, but it rather flatters the level to which the industry has fallen.

This fall and evaporating hope could have a profound impact on employment within the industry. Without a brighter future to look forward to it is hard to see firms holding onto staff.

But it is where the fall output is coming from that continues to be most disturbing. Although infrastructure had a better third quarter, work is flagging here and it is down on a year ago. Meanwhile there is an accelerating decline in both private new housing and commercial work.

These sectors were being looked at as the saviours for construction not as further lead weights to be tied around a drowning industry.

The pain for the industry will be made all the more uncomfortable to take given the Government’s constant and concentrated public relations exercise designed to suggest it is focusing on the industry as a beacon of growth.

What The Plan for Growth said in March 2011: “Construction will particularly benefit from: the radical changes to the planning system and publication of a rolling two year programme of projects where public sector funding has been agreed as well as a long-term forward view of infrastructure; reforms in the way government procures construction projects; and announcements on the regulatory requirements for zero carbon homes to apply from 2016.” 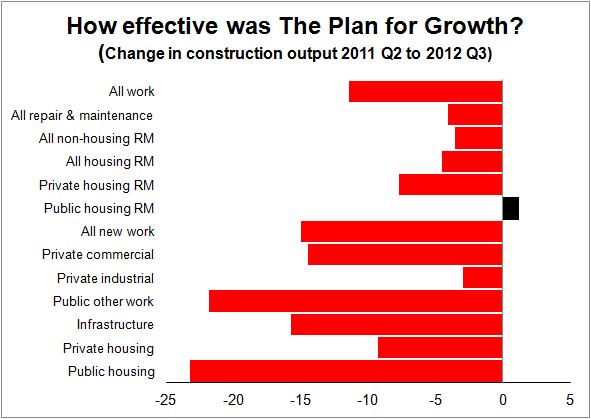 The figures say otherwise as the second chart shows. Slightly ironically, the only sector to have seen growth since the launch of the strategy is public housing repair and maintenance work.

More telling, since the launch of the strategy in the spring of 2011, housing output has fallen 12%, infrastructure is down 16% and private commercial is down 14%. These are the sectors critical to growth.

What is worse is the trend is downward and there is no sign in early indicators that this trend will reverse.

It would seem that it is time for the construction industry to stop listening to the Government and telling it some home truths.

The first home truth might be that it hasn’t a clue how the construction industry works, perhaps put more delicately though.