The number of homes being shared by two or more families has leapt almost 20% over the past two years, according to families and households data released last week. 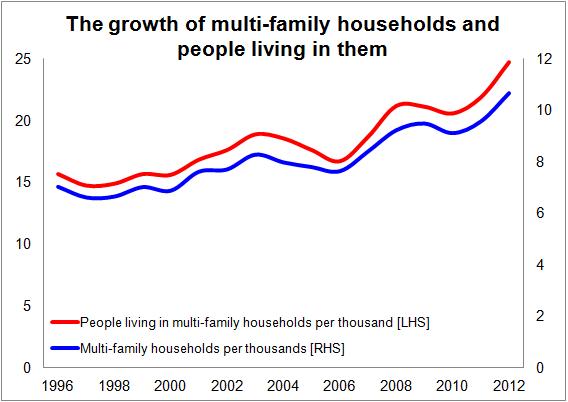 The lack of publicity this data received seems surprising given the clear implication that it is potential evidence of the massive squeeze caused by housing shortages and lack of building.

The bald data published on the ONS website shows the national picture. It suggests a scary rise in the numbers of families having to share a home since the mid 2000s (see top graph). 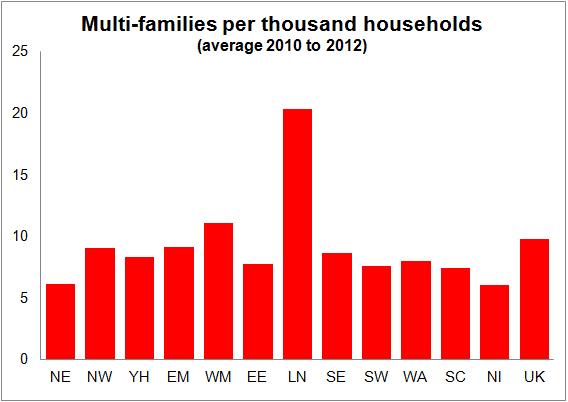 It would be wrong to assume this is all simply due to housing shortage. There may be other causes. There could be cultural factors. It may be that immigrant families are more accepting of providing a home for their married children. I don’t know. The inclusion of civil partnerships as families will have a small effect as will other factors.

But whatever the actual causes, the pace of increase is rapid and it provides yet more signs stress of caused by a lack of housing. 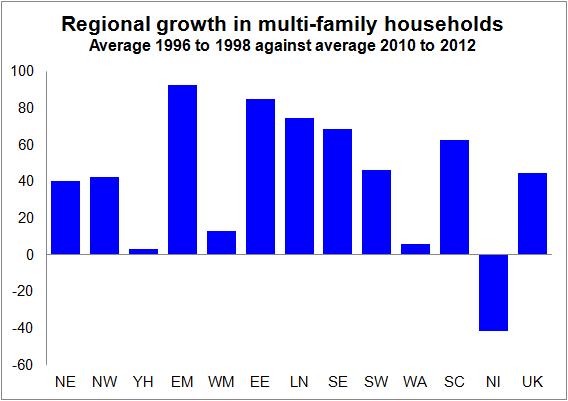 I requested regional data from ONS and it was kindly and swiftly provided. The data is based on the Labour Market Survey and does tend to bounce about a bit when the sample size is reduced. So I used three-year averages for comparisons.

The graphs show where multi-family households are more concentrated (middle graph) and the growth rates since the late 1990s (bottom graph).

Looking at the growth rates in England at least there does seem to be a north-south divide. The increase in multi-family households is lowest in the northern regions and in the West Midlands.

Meanwhile, Northern Ireland stands out as the only area to see a drop in the number of multi-family homes. This leads one to wonder whether this is down to a faster increase in the housing stock. The stock increased by more than 20%, double that for England over the period.

Looking at other tables in the families and households data does seem to suggest that the “boomerang kids” phenomenon, where young adult children leave the parental home but return later, may have been a bit overblown in people’s minds in the past.

When we look at the longer trend and adjust for the increase in households the figure is still about the same as it was in the mid 1990s.

In the period leading up to the recession the rise was fairly muted, with the number having dropped to a low in 2002, before rising again.

But  since the recession there has been a pretty sharp rise, with the number of dependent children living with their parents or parent in a single household growing by about 10%. That’s from about 7.2 million to 8.0 million.

The families and households data are fairly volatile, particularly if they are sliced and diced, so should be treated with caution. But one reading of them is that with the population increasing faster than the housing stock we will see more families sharing a home and more boomerang kids kipping at their parents.