The latest forecasts have been released for construction and, while it may not look like it, they are a shade more optimistic than they were at the tail end of last year.

That said the picture remains broadly the same, with the industry heading into a second dip of recession before increased buoyancy in the private sector replaces falling public sector funding and drags construction back into growth. 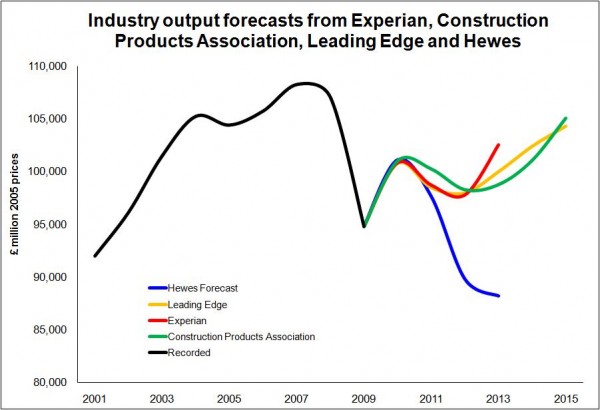 The forecasts from the Construction Products Association and Leading Edge show recovery coming in 2013, with a more optimistic Experian seeing a slight lift in output in 2012.

The forecast from Hewes & Associates clearly comes over as the outlier among the four forecasts covered here. It presents a particularly grim view of the prospects for construction that suggests no recovery within the forecast period.

Hewes, however, does tend to take a more pessimistic view of risks than most other forecasters in the construction sector.  And broadly speaking what distinguishes this forecast from the others is that it is less optimistic about the recovery in the private sector.

So comparing Hewes’s expectation for private new housing, for instance, with that of Experian’s – the most optimistic about this particular sector – we see Experian expecting about £4 billion (at 2005 prices) more work in 2013. And there is a £4.5 billion difference if we compare the figures for commercial work within these two forecasts.

Comparing Hewes’s expectation for private housing repair and maintenance with that of the Construction Products Association – the most optimistic here – we see Hewes expecting almost £2 billion (at 2005 prices) less work by 2013.

What is clear is that Hewes takes a far bleaker view of how the economic crisis will play out on the prospects for construction. He believes there is a risk of a much longer shadow being cast over the industry with a far slower pick up in the private sector investment needed to offset the public sector funding collapse.

But, while they present a fairly similar pattern of growth overall, there are significant differences in the views taken when comparing the forecasts of Experian, Construction Products Association and Leading Edge.

Experian for instance is much more positive about the prospects of new housing than is the Construction Products Association, but far less positive about private housing repair and maintenance.

Indeed Experian is much more bullish than the Construction Products Association about new work generally, with a gap in their expectations of more than £4 billion (at 2005 prices) by 2013.

This range of views is not unexpected given the considerable amount of uncertainty, not least surrounding the performance of the economy as a whole. And the judgement calls on each of these uncertainties potentially lead to quite different sets of expectations, each plausible.

The path of economic growth will play a huge part in determining the level of confidence needed to boost private sector investment in construction and so in shaping the overall prospects for the industry.