The latest monthly housing market survey from the surveyors’ body RICS will come as unwelcome, if expected, bad news to developers, estate agents and potential sellers.

The survey shows the fastest increase in the number of agents seeing price falls since the ugly period that followed the credit crunch (see graph sourced from the RICS August survey) and the lowest reading since May 2009. 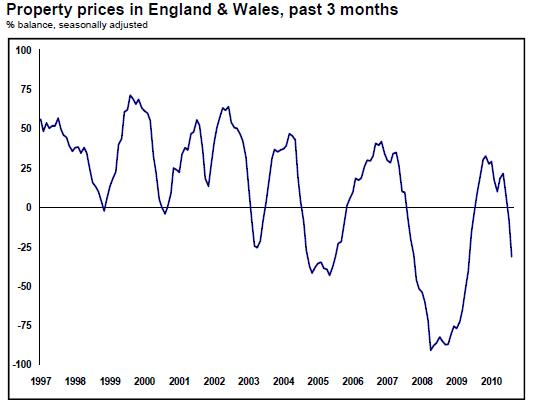 Last month the survey showed the balance between agents seeing prices up and those seeing prices fall turn negative for the first time for more than a year.

That balance has just got much worse – from 8% to 32%. And this does seem to provide hefty support for the view that prices are now slipping and slipping fairly broadly across the nation.

In reality most estate agents have seen prices flat over the month, but there will be growing numbers of people asking whether this is the beginning of a new collapse.

Certainly there are increasing numbers of those regarded as experts who are suggesting that the market is set for a second fairly hefty correction.

And using any sensible measure there is a strong case to be made for arguing that houses are still trading at 30% or so above their “natural” level.

Ultimately whether houses are overpriced or not doesn’t matter in the short term if enough people are prepared to buy and sell at the market price.

What recent RICS figures have been suggesting is that fewer people are now prepared to stand on the buyers’ side of trades and this is supported by the weakness in the mortgage market – particularly among first-time buyers –  reported by the Council of Mortgage Lenders.

Meanwhile the survey shows there have been more people looking to sell. This finding is supported elsewhere. Rightmove reported that this August saw the strongest for three years for the number of “fresh” property coming in, up 41% on a year ago.

This appears to lie behind the softening in the trading price of houses and flats – reflected in the various house price indexes falling. And we might expect them to fall further over coming months on the basis of the RICS data.

But interestingly while the fall in buyers is continuing, the RICS picked up a rapid slackening in the growth of sellers in August – obviously it must have a different time frame than the Rightmove survey. This may be a one off, a glitch, but should this be reinforced in later surveys we may see the balance of buyers and sellers might shift back more in favour of the sellers in the market. 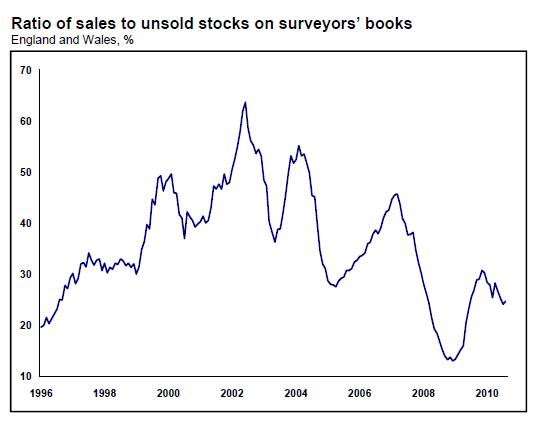 The RICS graph that seems to be afforded most respect is the one showing the sales to stock ratio (see the graph sourced from the RICS August survey).

As I pointed out in March this measure has a happy knack of heralding a turn in the market, when it falls prices weaken.

This had been pretty much heading south since springtime. But it turned up a tick in August.

This may mean nothing, but if it does mean that we are seeing a market of fewer buyers, but also fewer homes on the market, then prices will be a bit stickier.

Things are very uncertain, so who really knows? But as the evidence currently stands it still leads me, at least, to hold to the view that while prices most probably will slide the slide will be contained to some extent by an increasing number of potential sellers choosing to stick rather than twist – letting their property rather than selling it.

If things do pan out this way – and it is only wild speculation – the softening in the market is most likely to be translated into far fewer property transactions.

That is not what construction needs right now, because it will lead to far fewer new homes sold and in turn far fewer built.

And, compared with initial downturn sparked by the credit crunch, housebuilders are more able and eager to hold margins even if it means letting volumes sink.

They now are building more houses and are less encumbered with flats, which rely more on high turnover in the market. So they can feather their supply more closely to demand and are less pressured to sell at low prices to shift stock.

For me this all points to rather more stable prices than one might expect, but a potentially horrible further drop in housing turnover and possibly a nasty fall away in the hoped-for growth in house building activity.