Here’s a question that goes right to the heart of current housing policy: Should we be using incentives as readily as we are to encourage first-time buyers onto the property ladder?

However iconoclastic or contrary this question may seem, it needs to be asked. There is so much at stake.

Promoting first-time buyers is pretty much central to the Government’s attempt to get the house building process moving and each new homeowner placed on the ladder is viewed as a reason to be cheerful.

Take the recent visit of Housing Minister John Healey to Salford. Here he met Stacey Smith, a resident of the New Broughton development, who had bought her new home at a reduced cost through the Government’s Homebuy Direct scheme, says the press release.

What is special enough about the New Broughton scheme to warrant the ministerial visit is that it has received Kickstart money and building is on the move again.

“After over a year at a standstill, building work at New Broughton is back on track to provide over 160 homes for first-time buyers, social tenants and market buyers alike,” said Mr Healey.

Heartwarming stuff indeed and I’m sure Mr Healey’s political minders were chuffed. Unfortunately I am left with a twitching unease, the sort you might imagine you’d have if you saw a field surgeon putting sticking plasters on gaping wounds.

I don’t begrudge Stacey Smith her new home, far from it, more people need good homes. And I certainly will be among the last to complain about seeing more house building activity.

But while strongly promoting first-time buyers in the current market may be tempting and expedient, I have a nagging, queasy feeling that this approach may well end up doing more harm than good in the long term.

I was unsettled by some Council of Mortgage Lenders data that caught my eye last month showing the startling rise in the median earnings of those moving home. This suggests that each year you have to be much richer to move up the housing ladder.

A closer look at the mathematics of house buying seems to be telling us that it now takes first-time buyers twice as long to trade up to their second as it used to a decade or so ago. And that is with some pretty favourable reading of the numbers.

And the recession will be making this worse, as it tends to bear down disproportionately on the prices of first-time buyer homes. This increases the gap between the first and second rung of the housing ladder, leaving more first-time buyers trapped on the first rung and unable to trade up.

At the root of the problem, it would seem, is the mortgage-lending and house-buying culture borne from an age when inflation and interest rates were much higher than they are now.

As all economists know, while high inflation may be a scourge to savers and create other unsettling effects, it has the happy knack of burning down debt. So, a little over-exuberance on the borrowing side can be swiftly mended.

Here are some graphs that hopefully help to illustrate the point.

To get a better sense of what the difference in interest rates and inflation really means, I have decided to try to look at the journey into home ownership and towards trading up for an individual rather than looking too much simply at aggregated data.

So let’s assume the individual is Stacey Smith and we’ll set her on a series of different journeys into homeownership than the one she is on.

Let’s assume she and her mortgage lender are both happy with her taking out a loan of three times earnings over 25 years on a repayment basis.

Now let’s consider how easily she will be able to make the move from first-time buyer to first-time mover comparing the effects of the different interest rates, earnings growths and house price inflations prevailing in the 1980s, 1990s and 2000s.

Using rough and ready indicative data we get averages something like:

Let’s assume these rates for each decade are constant from the point at which the mortgage is taken out and explore how the mortgage cost as a proportion of the earnings change over time. 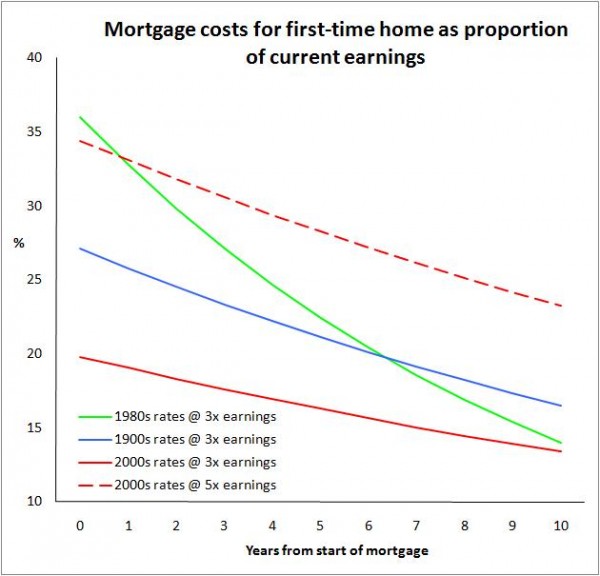 What we see (green line on graph 1) is, not surprisingly, that in the 1980s with high interest rates (reflecting in large part high inflation) the proportion of Stacey’s earnings going on the mortgage is high at the outset (36%), but with hefty increases in pay the proportion drops fast.

All well and good, but Stacey has her eye on trading up the property ladder and that will mean trading to a property (let’s assume) 30% more expensive.

So she works out how much equity she has in her house (it’s gone up quite a bit and she has paid off some of the loan) and she takes that away from the price of the house she wants (that too is rising, so the gap is getting bigger in cash terms) and she can see how much a mortgage would cost her as a proportion of her earnings. The good news is her earnings have been rising sharply. 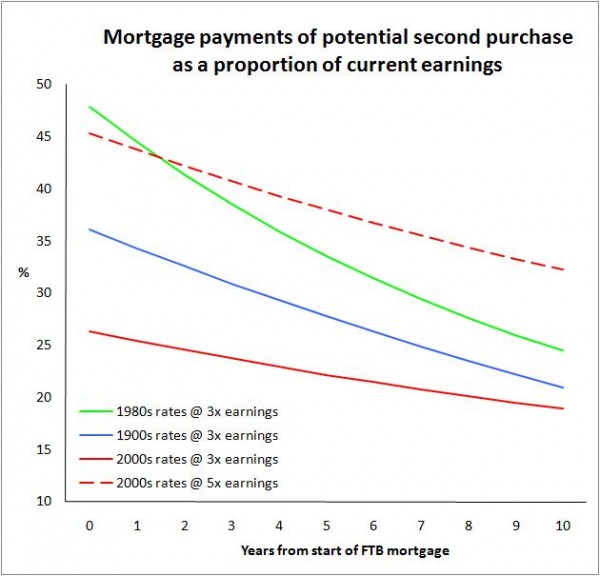 So, what about Stacey getting on the property ladder in the 2000s? She can afford a house for three times earnings no problem (see solid red line on graph 1). But can she find one? The trouble is that everyone else seems willing and able to afford to pay more than three times earnings, so prices are ramped up.

She starts by paying a shade less than 35% of her earnings on the mortgage (see dotted red line on graph 1). This is the same proportion as she would have been paying in the 1980s, but the pain will be far slower to ease than it was then.

However, the real pain is that it will take at least seven years if not eight years (twice as long) before she can realistically trade up (see dotted red line on graph 2). It is just as well she took out a repayment mortgage, as that gave her best part of £30,000 more equity.

Now lest you think these figures on house-price-earnings ratios are made up for convenience of argument it is worth looking at the Nationwide’s figures. In 1986 first-time buyers were paying three times earnings and in 2006 they were paying five times earnings for the homes they were buying.

So in simple terms this means roughly on average that it is likely that the move from first-time home to trading up has been taking twice as long in this decade as in the 1980s. That is about eight years instead of four.

What is even more concerning is that the reality on the ground is likely to be far worse than this illustration suggests, because of the increase in the number of 100% loans.

Also those who take out interest-only mortgages are likely to be significantly worse off in terms of equity building in a low-inflation than in a high-inflation economy. In 2007, according to the Council of Mortgage Lenders’ figures that accounted for about a third of first-time buyers and about 20% of first-time buyers didn’t have a specified vehicle for repayment.

And what of those who took out loans of seven times earnings?

The figures seem to be telling us that it now takes twice as long to move from your first home to your second as it used to.

The platitude that suggests getting someone on the first rung of the ladder is a noble thing to do in this light can be seen to be extremely misleading, because while the first rung may be lower, the second rung is an awful lot higher and increasingly out of reach.

This is certainly unsettling for first-time buyers who feel trapped in their first-time homes. But it is also creating a serious problem with the functioning of the house market as a whole, if a dwindling number of the current crop of first-time buyers can trade up.

And it raises some very unsettling social questions about overstretched families living in undersized homes.

So, while first-time buyers may provide good fodder to satisfy the hunger in Government to see new homes built, they are not providing nourishment for the housing market as a whole.

It would seem that there is a case to ask some serious questions about a policy that appears to be based in part on force-feeding first-time homebuyers with Government incentives as a means to find buyers for newly-built homes.

Meanwhile, it is interesting to note how private house builders are now looking ever more eagerly at the larger family homes market for the equity rich. So what is it that they know?