Few would argue against the view that this set of Pre-Budget Report announcements has more to do with pre-electioneering that pre-budgeting.

That’s fair enough. The Labour Party may not be in power to pursue its plans and, if it is after the next election, we don’t know how keen it will be to stick to them given a further five years to play with.

The political desire to put the pain at the start rather than the end of a term in office is great. So my guess is that whoever wins the next General Election we can assume that this is a vision of the future that is about as good as it gets.

But for all that, the Pre-Budget Report does tell us a little. Some of what it suggests is comforting, some very unsettling.

Leaving aside the deliberately eye-catching policies of a boiler scrappage scheme and some tweaking around the money for greening Britain, the numbers within the report are interesting.

If we examine public sector net investment – largely what will determine cash to construction – the numbers show a significant increase on what was announced in the Budget for the financial years up to 2010-11.

This all suggests that the Government is pumping money into construction faster and intends to continue doing so for a year or so more.

That may account for the slowing in the collapse of the construction figures and the reduced panic we have experienced in recent months.

The surge in publicly-backed construction has been rapid. The public sector now accounts for about 40% of total construction output, compared with a shade more than 30% in 2007.

But this extra money, while welcome in staving off the pain now, does suggest a rather larger fall when the flow dwindles, as is planned.

The graph below (click on it to enlarge) clearly illustrates the short-term growth in Government investment. But more clearly than that it highlights the increasingly steep decline the industry faces in a year or so. 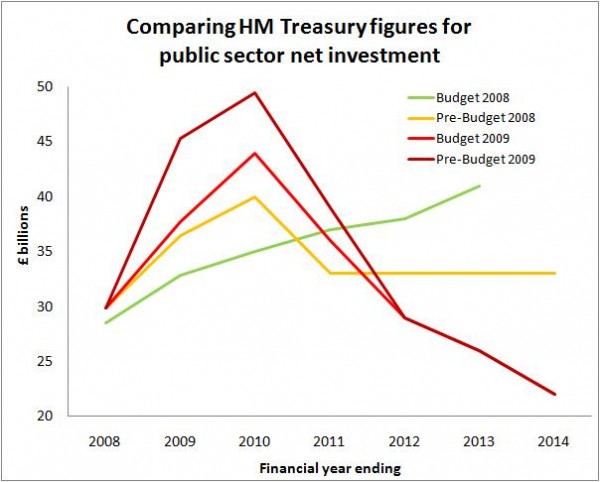 And there is worse to come with net investment falling to £22 billion within the forecast period.

As has been pointed out to me, the establishment of Infrastructure UK can be viewed as an attempt to find ways to fill the gap that will be left by the retreating public sector.

But perhaps more worrying still is that these projections are based on what many would described as pretty optimistic forecasts for growth within the economy, a point made strongly in the House by Liberal Democrat spokesman Vince Cable.

There certainly are significant downside risks, which, if chance falls that way, will put even these depressing numbers under further downward pressure.

But if you are looking for the positives or guidance, I suspect if there is one pointer to strategy for construction companies to come out of this Pre-Budget Report it is to take far more note of the green pound and low-carbon construction.