For those trying to interpret the latest set of construction industry forecasts the task is probably tougher than usual.

The move by the Office for National statistics to reclassify a large firm from services to construction has created what amounts to a structural break in the underlying data, which is very noticeable in the infrastructure series.

This made the job of forecasting and creating straightforward narratives much harder than normal. Users should then pay much more attention than they might otherwise to the script in these forecasts when pulling out the data.

However, the underlying message seems clear. Optimism has been shaded down. Certainly the prospects for growth look slightly more modest than six months ago.

That said both Construction Products Association (CPA) and Experian see sound growth that in normal times would be seen as very promising. This is very evident in the graph. But the graph also shows strikingly that there remains a split between this view and that of Hewes, which sees a slump ahead after this year. 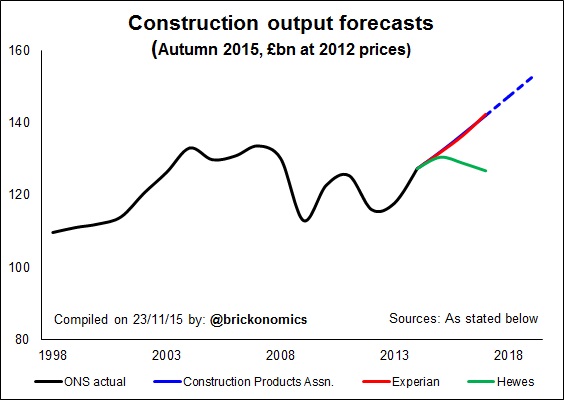 This is to be expected as Hewes historically tends to factor in more of the downside risk. The gap, however, does help to illustrate the amount of fragility and uncertainty and the potential impact if potential downside risks are realised.

These risks (if we compare the gap between the Hewes view and that of the other two) would fall most heavily on big drivers in new build, private housing, commercial and infrastructure. These are, in the Experian and CPA forecasts, expected to deliver the lion’s share of growth between 2014 and 2017, accounting for more than £10 billion of the near £15 billion growth in output.

Leaving aside issues related to capacity constraints, it’s worth noting that growth in these sectors requires confidence from the private sector to fund the work. And while there is a clear appetite to invest, financial or political shocks can rapidly shift sentiment.

Furthermore, the private sector will take some cues from the Government. It will want to see commitment to the nation’s infrastructure. While the Government may have finally warmed to its role in providing greater capital spending to underpin productivity and growth, much of what it will actually deliver will depend on the political constraints it has set itself on austerity.

More may become clear after examining in detail the Autumn Statement this Wednesday. But it seems clear that the lack of wiggle room the Chancellor has left himself in his ambitions to deliver a balanced budget, places capital spending in jeopardy if sufficient savings can’t be found from current spending.

Ultimately, however, someone has to fund the work. They actually have to pay for it. This is the challenge. And to my great delight this was a point made a couple of weeks ago by Sir John Armitt at the launch of the Global Construction 2030.

There is without doubt huge potential for growth in construction. Encouragingly there is a greater recognition than for a long while in its value. This may increase the likelihood of growth and indeed strong growth. But it does not however make it a given.