Here’s a prime example of why it’s important to use a range of measures and timeframes rather than one single stat when using statistics as a tool to examine or describe whatever you’re interested in.

The headline figures from the latest construction statistics say that construction grew in the final quarter of 2013 by 0.2%. This compares with the earlier estimated 0.3% fall released when the first estimate of GDP was published late last month.

Looking simply at this changed figure the immediate interpretation is “Brilliant the industry is doing better than we thought!!!”

Trust me this isn’t some conjuring trick and it’s not too hard to follow. 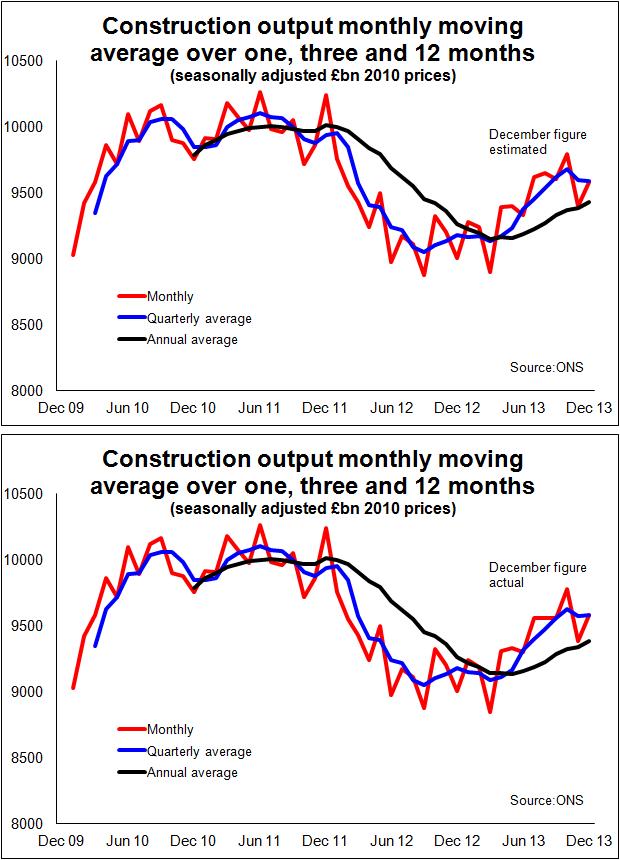 With the graph to illustrate my case, I wrote a blog saying construction was still growing despite the estimated fall in the final quarter. My first point was that the figures would be revised and I provided a soft hint that it would likely be up – although making plain that it could have been down.

I’m not a clairvoyant. Revisions happen all the time and you can get a hint of how things might change. Though sometimes (well quite often really) you’ll be wrong.

What’s fascinating (and it amused me) is that the newly published table 2a shows a figure of £9,576 million for December. If I’d put a spread bet on my initial guesstimate of £9,577 million what would I be raking in now?

The point is that with the same figure for December we have ended up with two different stories: one of decline taking the data at the time of the GDP estimate; one of growth from the latest construction output data.

The irony here, as I said earlier, is that the upward revision for 2013 Q4 from a fall to growth comes as a result of less work having been done than we thought (about £550 million) in earlier months.

So we get what may seem paradoxical, less actual work than previously estimated leading to the headline number of stronger growth in the final quarter.

This is why we need to look beyond the simple headline measure and take a longer view of the statistics when interpreting the numbers.

Look at the two graphs. How much real difference is there? Little. But the narratives that might be created from making poor selections from the data that feed these two graphs could be radically different – one saying growth the other saying decline.

This would not be the fault of the statistics. It would simply be poor narration.