The most common interpretation seems to be: “Construction grows at fastest rate for six years.” This is not surprising because it was what the Markit release actually said. 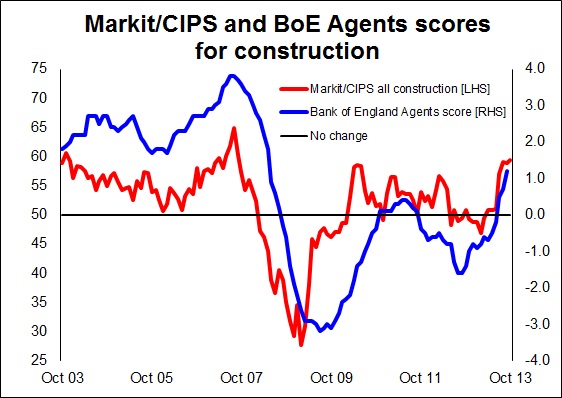 I’m not saying this is bonkers, but it would surprise quite a few people if the official construction output figures record the fastest growth in six years in either the third or the fourth quarter of this year.

The third quarter preliminary estimate of GDP put construction growth at 2.5%. This is pretty strong for a quarter. But growth in the second quarter of 2010 hit 5.9% after first quarter growth of 3.1%.

I’m not seeking to be pedantic, here. But there’s a problem. The strident headlines suggest to the general public and policy makers that things in construction are pretty tickety-boo. They’re not.

So let’s have a go. Let’s look a bit closer at the data and the context.

It’s just possible that a lot of firms are feeling at least a little better. This would boost the index more than a few people feeling very much better, even though the latter could provide more growth. There are of course a few other issues with surveys such as this but I’ll not repeat them yet again.

By way of comparison it’s worth looking at the scores for construction provided by the Bank of England Agents. These seem to provide a more sober view of the state of the sector. 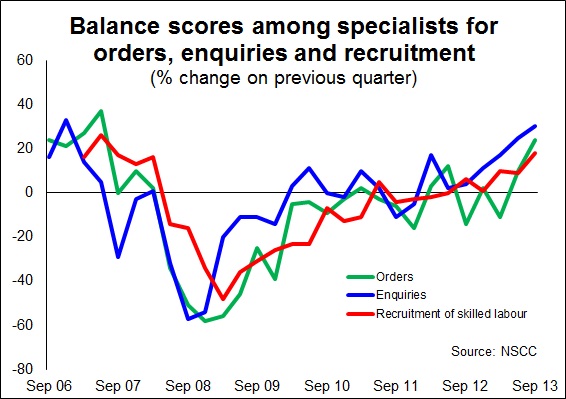 The figures are created from intelligence gathered by the Bank’s agents. Again they’re not exactly a measure of growth rates, rather a view on the health of the sector. In my view these data seem to map slightly closer to the official output figures.

That said the Bank of England data chimes with Market/CIPS and indeed with the RICS construction survey and RIBA’s Future Trends survey that came out last month. Things are improving.

Importantly this improvement is being felt on the ground. The latest NSCC survey of the construction specialists shows enquiries, orders and recruitment all increasingly positive (see left).

Furthermore we will see next week the Construction Trade Survey – compiled by the Construction Products Association and covering surveys of members from range of industry sectors. This will show the breadth of improvement within the industry. And the media is awash with other trade surveys and general economy indicators that look favourable.

Fantastic. But before getting carried away let’s explore what lies beneath, what lies ahead and what challenges the industry faces on the way.

As mentioned earlier construction growth – at least as far as the official figures are concerned – was very rapid growth in 2010. It didn’t survive much beyond the General Election.

Starting with the challenges facing the industry, probably of most note is that recovery will be a prolonged process for an industry ravaged for six years or more. There’s a need to invest to rebuild the industry. That means spending on training, investment in new equipment and IT.

Just looking at employment, large numbers have left the industry. Those remaining are on average older, so –despite a higher retirement age – the industry will be shedding skills fast. This means a lengthy period of recruitment and training and probably investment to improve productivity.

Profits too will need to be rebuilt. Many firms have been working at an operating loss, eating into their reserves and holding off investment. This cannot be sustained. Construction prices will rise, at least in the short term.

Meanwhile main contractors have to work through a raft of contracts bid at ludicrously low prices against a headwind of rising subcontracting, labour and materials prices. This could well send some under, further damaging the fabric of the industry.

Then we have the aspirations of the Government-Industry strategy which is calling for improvements and cost savings. That means yet more investment.

That all amounts to a big challenge. 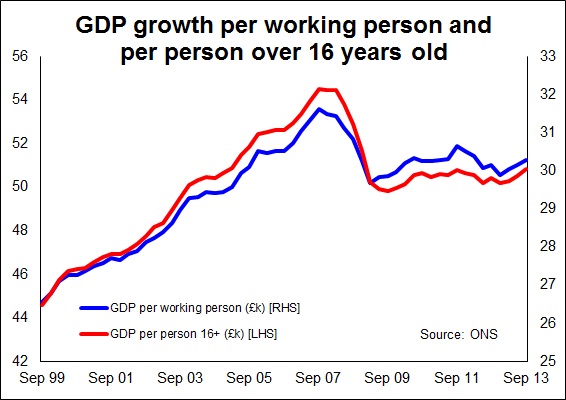 Then let’s look at what’s actually driving the recovery. Well, in part you’d expect a recovery at some stage and as the third of the graphs shows it’s been a long time coming. And actually, on the current data, it doesn’t look that fantastic so far, if you scale for the numbers of adults overall and in work.

The turning point seems to have come about a year ago. How much the Funding for Lending scheme, launched in July 2012, helped is hard to know, but it seems to have supported the growth after the economy appeared to be heading for yet another recessionary dip.

On top of that we’ve had Help to Buy, which has underpinned recovery in house building and fuelled excitement in the housing market more generally. This almost inevitably will have fed through into greater consumer confidence, at least among homeowners.

Global instability has made London a city of choice for a huge amount of international wealth, while the easing of fears of financial mayhem in the Eurozone has made investors more willing to invest in development. This has all supported construction, especially in London.

But of huge importance all the above has been set against a monetary policy backdrop looser than any seen since before William and Mary where on throne.

Meanwhile on the fiscal side the Government’s austerity, while I would argue grotesque on the capital spending side, has perhaps not been as harsh as some might have thought. Furthermore employment levels have held up rather better than most expected as workers took cuts to pay rather than cuts to numbers. This has, in part, provided less pressure than might have been expected on the Treasury coffers.

And let’s not forget George Osborne is a very political Chancellor. Rebalancing the economy – the little we have seen – seems to have pushed to the back seat as he seeks to conjure growth. He knows he needs the economy to be jollying along as the nation walks towards the poll booths.

So what lies ahead? Well there is, as always, in economics a few twists. Many of the policies currently in place and much of the benefits the economy is receiving are simply the result of the awfulness of the pickle we’re in. As we un-pickle ourselves these will, in time, vanish.

Help to Buy may be a quick victim if the housing market starts to run riot, or more of a riot as some would see it. Interest rates will most likely rise earlier the stronger the recovery. Stability abroad may make London a shade less attractive.

Basically the faster we grow the quicker the shutters come down on the sweet shop.

And then there is the General Election a year and a half away. What does this mean for policy post 2015?

So while it is easy to get excited about the recovery in construction, and it is welcome, the reality is that growth is just the start of what is likely to prove a long hard struggle along a bumpy old road for many firms and the industry as a whole.