I feel for pessimists in construction at the moment. It’s really tough times for doom mongers.

Every survey is running high, some touting record-breaking numbers. Meanwhile, forecasters are suggesting we are on the threshold of a phase of growth well above the long-term average.

My God. It’s boom time. How can you talk that down?

Well okay let me have a go. Not because I’m a pessimist (despite the rumours).

Things are looking better. And I take a simple view on this: you’d damn well hope for a recovery after five-plus years in the mire.

No, I just feel it’s my civic duty to try to offset some of the optimism bias that seems to land us in a mess periodically.

So what I’ll try to do is to put a downbeat spin on two very bullish surveys out this week and then add in a few “and another things” for good measure and see where we end up. 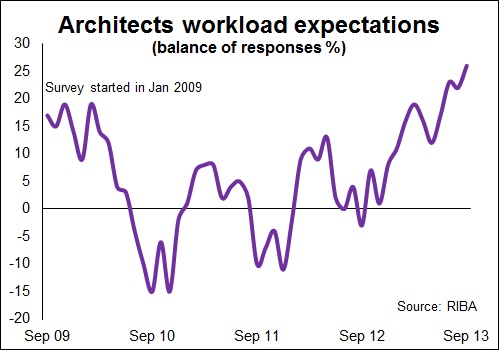 What makes these results particularly exciting is that they are from the professions that are more heavily involved in construction work at the front end.

So this is what we might expect is coming down the pipeline. 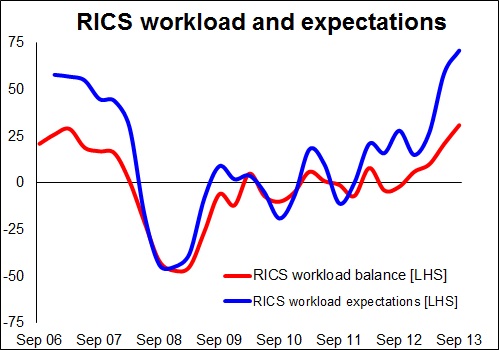 It’s clear from both that private housing is the biggest driving force. But it would be a narrow view to think that housing is the sole driver. Commercial work is picking up fast for these professionals. That’s what the surveys suggest.

Meanwhile the RICS survey suggests that the growth is broadening geographically, with all regions beginning to share in an uplift.

OK. Now for the tough job of trying to make that sound anything other than spectacular.

Well I think the first thing we should be looking at is the nature of the professionals in question. Workloads for both surveyors and architects will tend to be more volatile than work across the industry as a whole.

This is because in the good times they will do work that doesn’t see the light of day. However, the willingness to pay professionals for work on highly speculative projects dries up pretty quickly when the economy tanks. So these professionals tend to suffer harder times in the downturn, but enjoy faster growth in the upturn.

They will also see greater demand at rapid upward turning points, because there will be a huge amount of work needed just to raise the level of work and refill the pipeline – a sort of restocking effect.

So at this stage of the game you would expect these professionals to be running hotter than the folk doing work on the ground.

We need to adjust in our minds for this. We also need to take into account that the figures may be very high because there appears to be a coordinated turning point across the country and across sectors. Even the public sectors appear to be improving.

So the high level of reading on the index is likely to be influenced by a large number of firms in a coordinated manner seeing an improvement. This is good, but it doesn’t necessarily equate to a measure of volume growth.

It could be a lot of firms are seeing a little growth. From this measure we don’t really know. So you have to be a bit cautious about making direct historic comparisons.

Another point to note is that we are at a very low base. You need less volume, particularly in some sectors, to generate impressive growth proportionately. And, put simply, there are some sectors at such a low level that pretty much the only way is up. You’d expect a high reading, especially if we are seeing a fairly broad-based recovery.

On the technical side, these types of surveys are supposed to be proper measures of better, the same, or worse, but sentiment will play a part in the data provided. The data will also almost certainly exhibit some optimism bias, with those filling in the survey shading up rather than down, especially given the wall-to-wall upbeatness we are enjoying at the moment.

Furthermore, there will be survivorship bias in the figures. Those firms that have just gone bust will have left the sample. This effect will lead to the figures overstating what’s really going on in the real world.

There is another problem with the data from these professionals, or rather the samples. The respondents are increasingly winning work from overseas. This is great news, but what we don’t know is how much this is influencing these figures.

How much the survey analysis and design can cope with these sorts of problems is hard to judge, but it is worth bearing such issues in mind.

Interestingly, reading the report from RICS, it reckons the average expectation of growth is 3%. That’s good, but not spectacular. And given that this doesn’t necessarily all feed through to construction growth on the ground, it is even less spectacular.

So for all those reasons I would advise a bit of sober judgement on these data. The noise we are hearing out there isn’t really saying “boom time” just yet.

And now to some “and another things”.

We have to look at the broader picture and remember (I keep pinching myself to believe it’s true) that the Bank of England base rate remains at 0.5%. We have a bucket load of QE in the system. And we have Funding for Lending and Help to Buy providing a mainlining opportunity for craving property addicts – and, it must be said, to desperate young folk just wanting to buy a home.

Meanwhile we have the Right and the Left in the US playing chicken with their economy. We have a Eurozone that may seem less dysfunctional than a year ago, but is still on close watch by economic earthquake monitors. And the real doom mongers are out there predicting all kinds of comeuppance for the ever-expanding Chinese economy.

So on that basis it’s pretty fair to accept that we are not living in near-normal times, if we ever do. But certainly we are still immersed in a weird period of uncertainty.

And, closer to home, how contractors will fare as demand drives up prices and sucks the supply chain dry is a concern. We may yet see some of the worst damage wreaked as the industry pulls out of its slough.

On that basis I think there remains scope for pessimists.

But, in my view, I think it would be silly not to enjoy the prospect of better times. Equally it would be extremely foolish to go dancing in the street without at least a quick check on the traffic.