Despite the slight tick downward in the ONS seasonally adjusted construction output figure for August the signs are growing that the industry is pulling out of recession.

There are many ways to measure growth, but looked at on a 12-month rolling basis output (using the non-seasonally adjusted data) seems to have bottomed out in May 2013 and we have now seen three months of improvement. 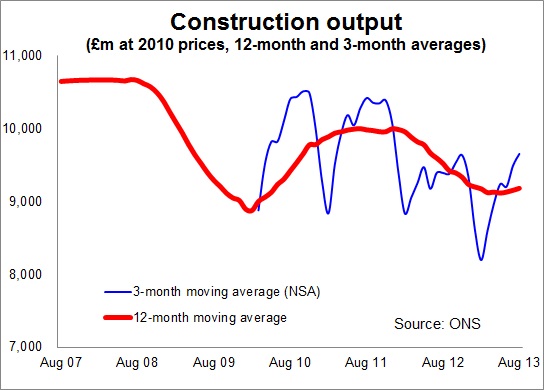 This is clear from the graph, which also shows that measured on a three-monthly basis the improvement is encouraging.

Taking a pretty optimistic view, if all goes well and with favourable revisions the industry might be looking at quarter-on-quarter growth of about 3% for the third quarter to add to the 1.9% growth enjoyed in quarter two.

Not surprisingly the figures are boosted by acceleration in new private house-building activity. The index figure in the ONS data puts activity in August at 118.6. That’s pretty much where things were in the late summer of 2008. Yes, much better, but still a long way short of the 165.1 seen at the start of 2007.

Housing activity is certainly not at the 10-year high the new housing minister Kris Hopkins seems to think it is, judging by a recent tweet he put out.

Even taking new housing out of the equation there are tentative signs of growth since June.

There are of course worries. Public sector spending is still declining and it is unclear when this might bottom out. So we should expect this to remain a drag on growth for a little while longer.

Of more concern are signs that the infrastructure sector may be running out of puff. Output in this sector tends to be erratic as it can be influenced greatly by big projects, so it can be tough to read. But the data of late have not been that comforting.

On the more positive side the private commercial sector does seem to be bolstering growth. Again, its growth path has been slightly bouncy over the past few years, but the good news is that in recent months it has been bouncing up more than down and there are distinct signs of growth since the start of the year.

What is quite remarkable and disturbing, given the low base and that growth is in its early stages, is the pressure that this has exerted on the supply chain.

Output remains about 13% below its peak level and more than 7% down on the 2010 level, but we are hearing increasing numbers of complaints about the lack of skilled labour and the dangers of materials availability and price increases.

What is unclear is how much of a drag this might have on construction.