In January 2009 Sir Mervyn King, former Governor of the Bank of England, made a speech at a CBI dinner in Nottingham in which he discussed “the paradox of policy”.

This speech was delivered at a time of was frenzied speculation and high anxiety over how policy makers were responding to the global financial crisis.

He said: “This is the paradox of policy at present – almost any policy measure that is desirable now appears diametrically opposite to the direction in which we need to go in the long term.”

He went on to describe various paradoxical policy responses, such as borrowing and spending more in the short term to support the economy despite the long-run need to save more and borrow less.

The idea being that often we need to buy time to prop things up before we can put in place long-term solutions.

This phrase “paradox of policy” came back to me strongly last week when I sat two big news stories side by side.

The Intergovernmental Panel on Climate Change (IPCC) said that human activity was almost certainly leading to overheating of the planet. Ed Miliband, leader of the Labour Party, said domestic fuel prices should be capped.

To my mind resolving these two, juxtaposed coincidentally simply by timing, is incredibly important for every citizen of the planet and every hard-pressed household in Britain.

But what fascinated me in particular were the implications for the construction industry (not that I’m dismissive of the plight of hard-pressed families or the need to save the planet for our children).

Let’s clarify the dilemma that creates a paradox of policy here.

If we are about to trigger a global catastrophe by gobbling energy inefficiently and at an unsustainable rate surely we should do all we can to be more efficient and use less. One very effective way to achieve this, possibly the most effective, is to raise energy prices.

However, raising prices rapidly with no financial compensatory cushion for the hard-pressed, means lots of people will suffer and deaths of the poor and frail increase. Also lots of people will complain because they have less money to spend on other things.

Let’s start to pull this apart by looking quickly at how effective raising energy prices might be.

Coincidentally last week the latest consumer trends data were released so I have used these to put together a simple graph to illustrate the impact of price on usage of domestic fuel. 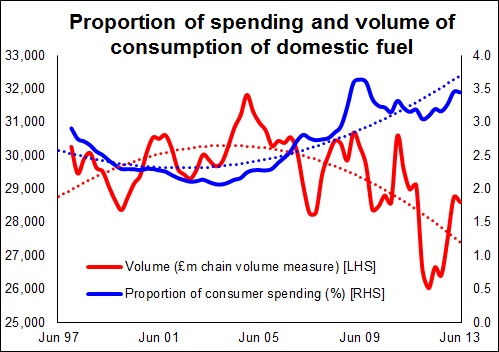 The graph shows the average proportion of spend of UK consumers on domestic fuel. The series only allows us to go back to 1997. But the story is pretty clear. As people are asked to spend more of their money on fuel they reduce the use.

Naturally there are a host of other factors in here, weather, energy efficiency measures, population growth and austerity brought about by the global economic crisis to name but four. But I feel pretty confident in saying price is a big factor.

This view is reinforce by the longer-term graph (for which I must that the good folk of the ONS for providing me with a set of longer time series for consumer trends). The data did not have implied deflators before 1997, so I can’t plot volume changes from them. But I have tracked the proportion of consumer spending on domestic fuel against the Digest of UK energy statistics (DUKES) data for domestic fuel use.

Again there are many factors not considered here, including a slight discontinuity in the consumer trends series pre-1997. But the story does seem to be the same. 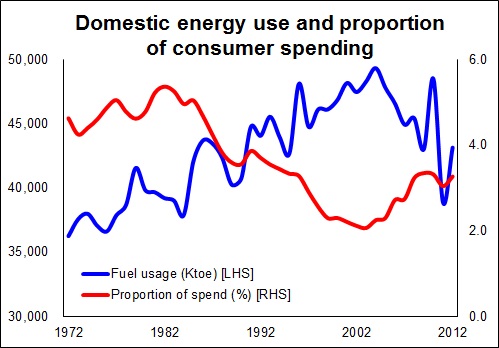 Looking through the rather erratic data, domestic fuel use has fallen sharply since the early noughties when global energy prices started to rocket. But even though consumers are using less, they were, up to the financial crisis, spending more of their budgets on fuel.

In reality, how people consume fuel and how much they consume is complex. But I think is fair to say that if you want to reduce energy use, putting the price up is a powerful policy move.

There is of course another reason to put energy prices up which has a much more long-lasting impact. It encourages people to improve efficiency. The higher the price the shorter the payback period for double glazing or cavity-wall insulation.

Non-fossil fuel alternatives become more attractive both at the large scale and in homes. The payback period of installing a solar energy system clearly falls. Also people start to take note of the energy efficiency of the homes they are looking to buy.

Naturally there are downsides economically. Particularly in the short term. If people spend more on fuel or insulating their homes or on blankets to keep warm, they spend less on other things. And price shocks can create real problems for economies.

But set against the above Ed Miliband’s pledge seems retrogressive if saving the planet is the priority. And of course there’s an irony, policies to save the planet were part of his brief when he was a minister.

Leaving aside any issues over how workable the plans might be and before condemning his move as an environmentally-regressive populist vote-winning policy (though he is a politician so part of his job is to construct vote-winning policies) it is worth looking at a related aspect of the policy.

Behind his argument is something other than a simple cap on prices. Implicit in his statement is that there is within the energy sector a perceived tendency for oligopolistic firms to adopt monopolistic strategies for rent seeking.

In a language most of us would understand he wants to give a kicking to lazy fat-cat companies who take advantage of their privileged position to grab more than their fair share of the cake. This aspect of the policy should sit very comfortably with the right and left of politics and with the public.

But this is really a side aspect to the point I’m considering, so if we can mentally isolate it that would be useful. The structure of the energy supply system is pertinent but not central to the simple argument I’m making.

Let’s consider Miliband’s main point which is that high energy prices are hurting people and the continuing squeeze should be checked. This on average seems a reasonable assessment. Energy accounted for 2.1% of consumers spending in 2002. It accounts for nearer 3.5% now. So you can see the case for a price freeze.

But a higher domestic fuel price is clearly reducing consumption and must be increasing the pressure to improve energy efficiency. That surely has to be a good thing for the planet and for construction firms looking to the sell into the domestic “green” market?

So surely we should be looking to increase the price, through, say, increasing tax on energy and reducing it elsewhere?

On average the argument might hold firmly. But in a nation that is increasingly less equal the average has less relevance. This is a statistical rather than a political point and is fundamentally the point of this piece.

One effect of increasing inequality between groups of people is, it seems to me, to increase the likelihood of policy paradoxes.

What prompted me further to look at this issue is something that spun out of a small piece of analysis I was asked to do for Retrofit Briefing, a monthly newsletter.

I was asked to look at what appeared to be an uncharacteristically poor piece of work from the ONS on domestic fuel consumption. The ONS report implied that energy efficiency measures were having a profound impact on energy use.

Whatever the merits of the report, the analysis prompted me to look at how sections of households from the poor to rich were responding to the hike in energy prices and the austerity brought about by the recession.

The sums were pretty basic, but I suspect rigorous enough. Using family expenditure figures and inflation rates from 2005 to 2011, I estimated domestic fuel consumption by income decile. 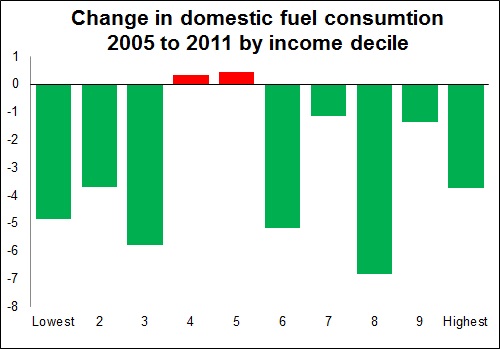 I found the graph the data produced interesting. It suggests that the poor are using less and the rich are using less, but those just below the median are using about the same amount domestic fuel even though it is twice as expensive.

The poorest are spending less and suffering physically.

The not so poor are spending more and suffering financially to avoid suffering physically.

The better off are investing in energy efficiency, to avoid suffering financially or physically.

Now, this is speculation. I haven’t done enough extra research to be any more certain. But gut-feel suggests it is pretty likely. It certainly fits with the spending patterns on housing improvements.

Anyway, for the sake of argument let’s assume this supposition is correct. What is it telling us?

Firstly that fuel poverty is a real issue, poor people really do whack down the heat when they are burned by rising prices.

The poorest half of the population by and large probably don’t or can’t improve energy efficiency of their homes when prices go up.

Increasing fuel prices is a very effective way of encouraging the better off to improve their fuel usage. And, being the biggest users of fuel, the better-off represent the lowest hanging fruit, to use the cliché.

From this it seems to me that in shaping a policy to encourage greater energy efficiency – a good thing for construction – we need to look less at the average and more at the impact on individual sectors of society.

This is probably increasingly true of most policy making. Because in a world that has grown more unequal the average size fits fewer and fewer people.

As construction firms and their lobby groups look to shape their policy suggestions in response to the environment, and indeed generally, I suspect they need to look much more closely at the differences between groups of people rather than relying on an average that is mistakenly taken to represent the whole.