Last week two reports came out with similar names but very different purposes. But they deserve comment and consideration together.

The following day the Government unveiled the Construction 2025: industrial strategy for construction – government and industry in partnership.

Most of the similarities and differences will be pretty obvious on reading, so let’s take them as read. What’s not as obvious, but is fascinating, is how one can inform the other. What’s depressing is how the Government seems not really to have grasped that as fully as it might.

So what’s the story?

The global construction industry is going through a revolutionary period which seems to have kicked off at the turn of the Millennium. The first few graphs tell the tale.

Since 2000 average GDP growth in the emerging economies, taken as a whole, has been no less than 2% higher than that of the major advanced economies (G7 as they were commonly known) and on average 4.6% higher. During the previous two decades the growth rates were much more closely aligned.

What we know about construction is that it is highly responsive to GDP growth, we see it here in the UK and it is much the case everywhere. This means that construction has been growing at a fantastic rate in the emerging markets since the Millennium.

It’s tricky getting consistent comparative data for construction globally. But casting our eyes between the first and second graph reveals the coincidence of acceleration in GDP growth in the emerging economies (red line) with an upward trend in the proportion of GDP going into investment. Much of that will have been construction.

And, as we see from data kindly provided by the Global Construction 2025 team, this asymmetric growth between the developed and emerging economies fundamentally tipped the centre of gravity with more work now undertaken in the emerging markets.

And when we look at the prospects for the future. Graph 5 shows that while construction will grow modestly in the developed nations, it will mushroom in the emerging markets.

Now we could go into details about where and what, but I would suggest that is the job of the Global Construction 2025 report. The simple point I want to make is that this is new, or relatively new in that it has been happening for just a decade or so and for half of that we have been in a blind panic over the global financial crisis and its long-lasting effects.

The Global Construction 2025 team remains bullish about the future path of growth in emerging nations. It believes that growth there, and to a lesser extent in North America, will see the global construction market expand by 70% in the years to 2025. 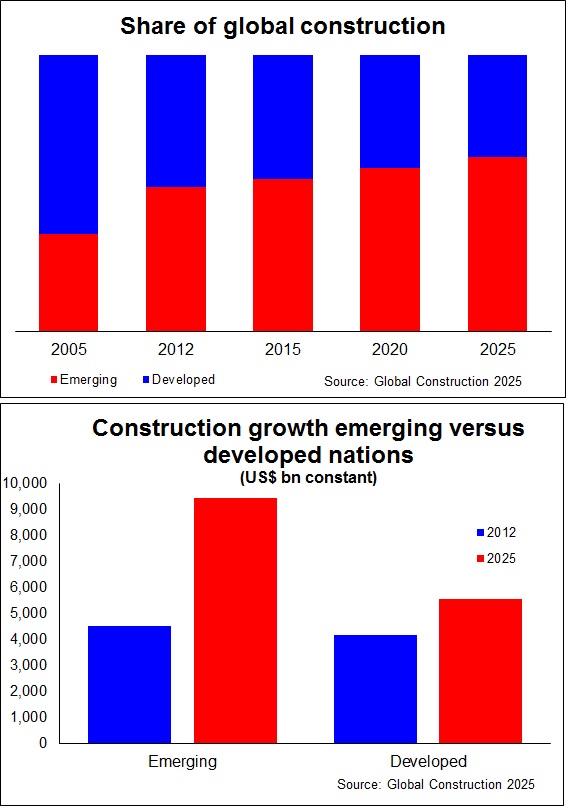 You can check out the assumptions if you like, but they seem reasonably plausible to me in as much as we can ever know anything about the future and what will eventually shape it.

This rather brings me to the second report mentioned. I will not hide my disappointment. I feel we do rather too much strategising and rather too little research when it comes to construction. But maybe that’s my vested interest and general cynicism talking.

My gripe, however, concerns how the strategic thinking, such as you can ascertain, is shaped by this information. Was I the only person who felt that the strategy read oddly? Yes it mentions BIM and a few other things that show it wasn’t written four decades ago, but it reads as if the 1970s and 1980s transformation of Britain into a post-industrial nation never happened.

Here’s an example – the report’s take on external trade. Unless my reading is defective, the emphasis is squarely on materials. Indeed one of just four targets was a 50% improvement in exports of construction product and materials.

Now I would be the first to argue that there’s nothing wrong with seeking to improve the competitiveness of Britain’s construction materials industry and in looking to boost exports.

But such emphasis simply on increasing exports of building materials seems bizarre.

It would be absurd for a high-wage economy such as ours to expect to have a good export record in heavy and relatively low-cost building materials. Meanwhile even for many high-value products it may be more cost-effective to manufacture them abroad while developing and maintaining the intellectual property in the UK. We need only look to Dyson’s decision to move production to Malaysia to see an illustration of that phenomenon.

It was a bit disappointing that the strategy didn’t seem to recognise sufficiently the fantastic efforts being made by the UK’s construction consultants in helping to improve the UK’s trade balance. 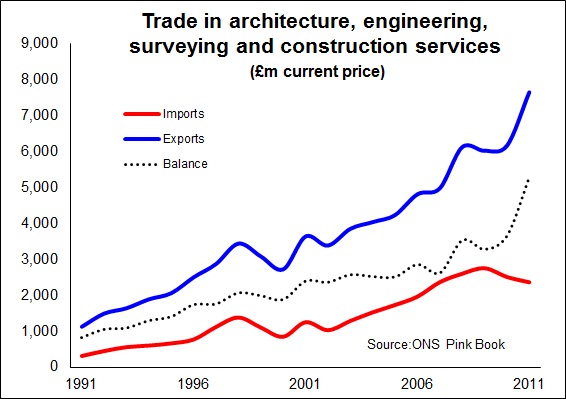 The data are crude, but Graph 6 illustrates just how rapidly UK consultants are building work abroad. And I suspect that later figures will show a continued significant expansion. UK construction consultants have responded impressively to the downturn in the UK, grabbing overseas work to feed staff at home.

Filling the UK design offices with work from overseas would provide an excellent foundation for improving growth, improving the image of construction, for filling and expanding the excellent engineering faculties in British universities, for stimulating new thinking in materials design, for expanding the nation’s pool of expertise in smart technologies…need I go on.

If we must freely spray political rhetoric relating to rebalancing the UK economy towards making things, let’s be clear that making things is not just about physically putting them together.

Of course we need to improve the construction process at home. We need to find workable solutions. We need more research into what works and what doesn’t, when and why.

Sadly, as reading the book Construction Reports 1944-98 makes plain, we seem to expend a huge amount of effort pontificating on the industry’s problems every two to five years. We isolate the same problems and imagine we are seeing them for the first time. Sadly this process of strategising seems to find more fault than solutions.

The fantastic expansion of global construction represents a once in a century opportunity for the UK to establish itself as a place of expertise, to exploit a head start and a solid intellectual infrastructure already in place.

Let’s pay less attention to winning some notional global race. The key for the UK Government should be to foster great jobs for those who live and work in this country, jobs that will help to preserve and enhance the fabric of the nation and an essential industry – construction.

Making the UK a hub of construction design, planning and innovation would do more to improve the image, increase exports, boost jobs and enhance the reputation of construction in this nation than almost anything I can imagine.

Let’s not waste one of the biggest opportunities to reinvigorate Britain’s construction industry by navel gazing and missing the main event.