The latest monthly construction output figures from the Office for National Statistics provided little extra insight into either the travails of or the prospects for the industry, other than to hint that the rate of decline may be easing.

Looking at the graph we can see a teasing turn in the downward trend in the 12-month total of construction output of late. And certainly there appear to be no shocks in the data when examining the finer details at sector level. 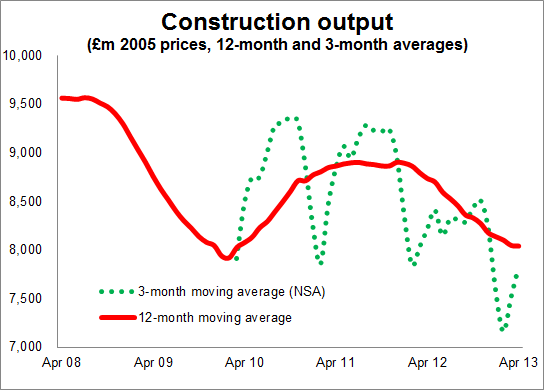 Indeed the temptation is to see the data over recent months as suggesting the industry is beginning to stabilise. But even if we do see stability through the summer and a gentle upward turn some time in the autumn this could still leave output between 2% and 5% down on 2012.

The stability across the construction industry is in large part down to the stodginess of the repair and maintenance sector, which tends to be much less volatile.

And on the new build side we keep hearing about green shoots in housing and there is reason to think that house building should start to rise. Heaven forbid it doesn’t given the level. But we are yet to see real signs of a sustained improvement in the construction output data. All said there does seem to be promise here.

The commercial sector however remains pretty weak and in slow decline. For the construction industry as a whole to motor, we would expect to have to see strong growth here.

Overall the figures show us nothing much, except there were no nasty surprises.

What can we say? With orders figures remaining fairly flat, it looks like it will be a little longer yet before we can call stability let alone a recovery.