Construction workplaces suffered worse effects from the recession than any other major sector when looked at through the eyes of employees.

That at least is the one of the first findings from the 2011 Workplace Employment Relations Study, which is the sixth in a series of major workplace surveys dating back to 1980.

The survey found that 72% of those employed in construction thought the recession had “a great deal” or “quite a lot” of an adverse impact on their workplace. This compared with 47% across all industries (see graph).

And it was more than in public administration, which has been a target for Government cuts, where 65% of employees said their workplace had been adversely affected a great deal or quite a lot. 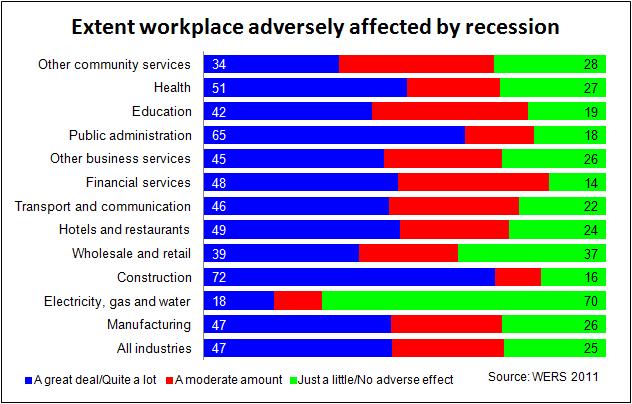 The analysis so far published only provides a small number of industry breakdowns, but it does show that 50% of employees in construction reported pay cuts or pay freezes as a result of the recession. This was however less than the 68% in public administration.

Interestingly across all industries just 22% of the managers asked felt that the workplace was weaker as a result of the recession. Sadly the data on how each industry compares on this measure is not available.

Certainly firms were not shy in acting in the face of the recession. The survey found 76% of workplaces had some form of action that impacted on the workforce, as the table below shows. 42% of workplaces saw wages frozen or cut, with 28% freezing unfilled vacancies.

The overall impact seems to be that employees feel they work more and get paid less. The survey of employees found 33% saying they had seen their wages frozen or cut and 29% saying their workload increased.