The sharpest drop in construction output since June 2012 is not the snippet of construction data you would want to read with a fresh new year ahead of you and optimism rising like sap in the spring.

Sadly that was the first key point from the latest monthly Markit/CIPS construction survey.

It is perhaps ironic that it should be the Markit/CIPS survey providing the first bad news of the year, given that historicaly it tends to be more optimistic than most other measures of construction. This we see from comparison with the indicator provided by the Bank of England’s Agents which has remained more negative since the start of the recession. 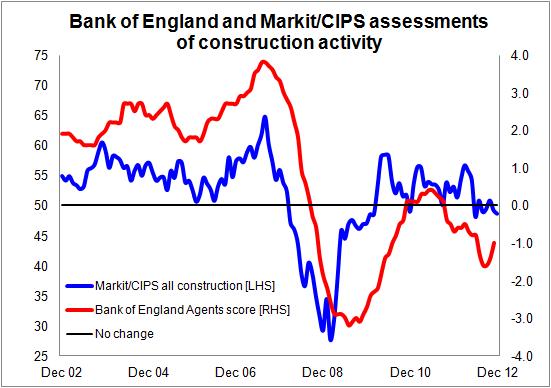 The Markit/CIPS story gets no better when we read the second key point: “housing activity down at the fastest pace for two years”. I’m not precisely sure what that means but it sounds depressing.

The set of three key points was completed with “total new business falls at accelerated pace in December”. This again rather blows the wind out of the sails as it is an indicator of things to come.

Now in my last blog post before 2012 drew its curtains I suggested “you’d be insane to bet your house on one month’s construction data”. That was in reference to a slight bounce upward in the monthly construction output figures.

I stand by that. I suggest that this set of data should also be taken cautiously, for two reasons.

One it’s a survey taken over a wet and grizzly festive season with an extra bank holiday – as the survey points out.

Two, construction data have a habit of bouncing about a lot.

But I also stand by the final words of that final blog post of 2012. “I am drawn to conclude that the latest figures are interesting, but they do little to shift the reality that the overall picture is pretty ugly.”

I guess this will not surprise many folk close to construction.

But there is one aspect of the current construction scene that remains a bit of a conundrum to many people and is probably worth singling out for special comment – the sluggishness of the house building sector.

And this was brought out in the survey. It stated: “The decline in residential construction output was the seventh in as many months and the steepest since December 2010.”

It is no doubt somewhat shocking to many people that house building activity is depressed and worse still sliding downward, given that the builders are making very respectable profits and that there is a huge national hunger for more homes.

What’s more, the stream of promises and incentives from the Government would have had us believe we were on the threshold of a new and ambitious era of buoyant house building in the UK.

True, there appeared to be early signs of recovery. There was a sharp rise in private sector housing starts and housing new orders between 2009 and 2010 which raised hopes.

That I cautioned at the time might be a mistake. A sharp rise was inevitable as builders restocked their production pipeline. But since 2011 the trend in housing activity has broadly been downward.

This was probably to be expected. If the nation insists on housing being provided almost exclusively through the private sector then it has to address a central problem. Who will buy these homes and with what finance?