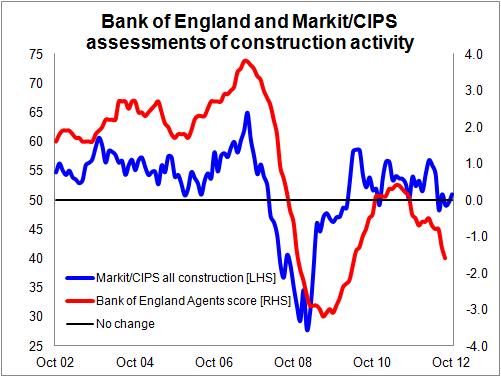 But in reality this indicator tends for whatever reasons to run a bit hot, judging by past performance. So a score of 50.9 probably should be seen as negative rather than positive.

Interestingly if we plot the Markit/CIPS survey data against the scores provided by the Bank of England’s agents we get a slightly more rounded picture of what is likely to be going on within the UK construction sector.

The graph shows a steady deterioration in the activity in construction over the past year or so.

What the Markit/CIPS survey does throw up is that the activity index for housing is suffering more than its indexes civils or commercial building. This is particularly worrying as this sector probably offers the greatest potential for growth within construction. Furthermore of all the things we need to build housing probably comes pretty much top of the list.

What surprised me a little, given that the broad index was marginally positive, was the interpretation provided by the usually fairly upbeat Markit and CIPS analysts. It was very depressing.

The comment from David Noble, CEO at CIPS rather makes the point: “Despite marginal growth in October, the prospects for the construction sector are bleak as firms prepare for the worst. They are heading into a long, dark winter, by shedding jobs and laying off subcontractors in response to the longest decline in new business since the start of the financial crisis in 2008/2009.”

When the optimists start sounding downbeat…