The latest new orders figures from ONS once digested will inevitably leave the construction industry feeling hungry and wondering where its next meal is coming from.

Some will note the quarter-on-quarter rise of 0.2% and the 11.1% rise in the second quarter compared with the same time last year and foolishly suggest this represents improvement. 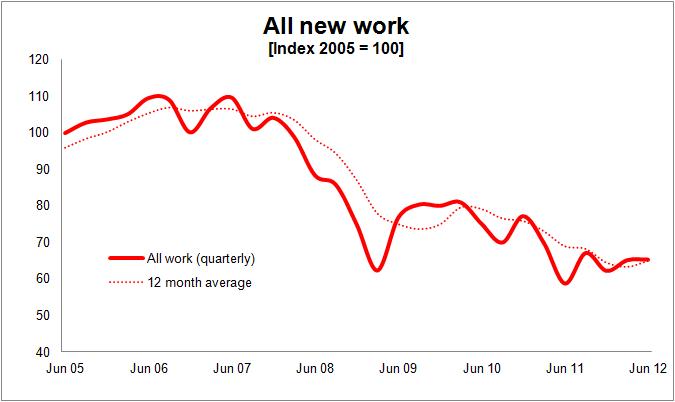 They would be wrong. If you ignore the public sector data (which bounced up slightly in the quarter), the direction of orders was distinctly down quarter on quarter by more than 6%.

Why should we put to one side the public sector contribution in these figures?

Well, put simply, with public sector cuts the future of the construction industry rest firmly on the performance of the private sector. That is the bit where growth really counts.

And the best we can say of orders there is that they are pretty flat.

The real problem is that they are running at about half the level they were before the credit crunch. Put another way, they are pretty much where they were in the grim early 1980s.

The graphs below provide a reasonable view of the desperate state of the orders figures.

For some while the engine of construction has been sucking on the juice from mega-scale orders let in the late noughties. These are running out and the tank is filled more with vapour than liquid.

Then think how much inflation we have seen over that five years and what those figures mean in real terms to those working within the industry.

Without new orders coming in fast the prospects look bleak.

And on the basis of these data, new orders do not appear to be coming in very quickly at all.

What are more dispiriting are the constant showy attempts by this Government to boost construction, housing in particular.

I suspect when the history of the post-credit-crunch construction industry is written it will judge the Government’s latest attempt to pump up construction as too little too late.

It has wasted a year or two when it would have had time to have developed a serious strategy to boost construction output as part of a growth strategy.

But the Prime Minister and Deputy Prime Minister have on too many occasions donned hi-viz jackets and announced building revolutions of epic proportions for their latest effort to carry that much weight.

Furthermore, in the latest offering while £billions in guarantees are being presented there is very little detail about where the actual cash will come from to pay for this boost to infrastructure and the direct investment is too low for it to be taken with over much joy.

And the supply-side efforts, mainly focussed on pushing planners into a corner for a beating, are rather feeble and pretty much irrelevant in the short term.

So sadly I fear the construction industry faces tough times whatever spin the Government may wish to put on its “lucky dip” policies.