The Office for National Statistics confirmed its preliminary estimate that construction was again in technical recession.

Indeed its latest estimate is that construction fell further in the first quarter of this year, dropping by 4.8% rather than the 3% it estimated for the GDP figures released late last month.

Not too much should be read into the revision. The scope for revisions up and down was great as the initial stab was based on limited data.

It was also unclear how much of a March bounce the sector would have this year. It is not surprising that the March bounce was less than in previous years, but the ONS is not in the speculation game so in the absence of hard data would have looked to past performance for a reference. 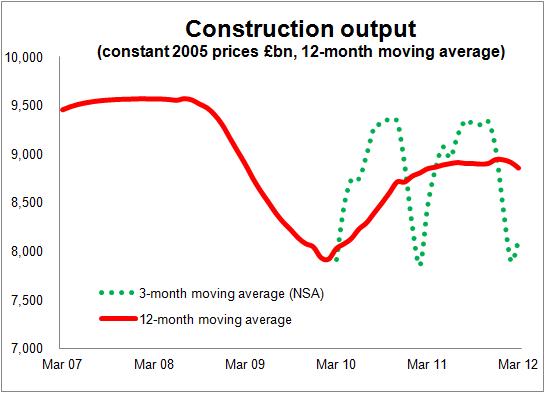 There will be further revisions to the data. And again these may be upward. But this will not change the underlying picture of an industry with declining workloads.

The more profound message in the figures (for March) is how the effects of the cuts in public spending are really beginning to bite with the decline getting faster and how slowly the private sector is responding.

Put simply at that rate there will be £4 billion less public sector building work (excluding PFI) this year than last. If the pace continues to accelerate things could look far worse.

That makes for a huge gap for the private sector to fill. And for all the optimism of more work in the pipeline there’s little sign of real growth yet on the ground.

New work in the private housing and commercial sectors is pretty much flatlining and looked particularly weak in the past quarter.

The volume of public sector new building work is currently running (on a volume measure) more than 40% up on four years ago. That broadly equates to £5 billion or so worth of work over a year. So just to get that part of public spending down to 2008 levels will be painful.

The good news, such as there is in the figures, is that the repair and maintenance sector is holding up fairly well. The ONS figures point to a fall of just 0.4% in the first quarter compared with 6.9% for new work.

Whether this is down to those responsible for property choosing to make do and mend rather than renew is hard to fathom. But with growth in the economy anaemic and optimism over growth waning it is fair to assume there will be increasing pressure to cut costs here also.

The graph clearly shows the volatility of construction output when we look at the 3-month moving average. This suggests that we need to be a bit cautious about inferring too much from data over a short period.

But the 12-month moving average line does underline the downward direction of construction. And this graph underplays the sharp drop experienced by the industry over the past six months or so.