The various data suggesting how house prices shifted over 2011 are mostly in and the vast array of pundits have made their predictions for the market in 2012.

So here’s a round up of the prospects for the housing market in the year ahead and a suggestion of what it might all mean for house building.

If we look at all the indicators, the picture painted for 2011 was of house prices flatlining. Some indicators were up a little, some down a little. That fits pretty well with the consensus drawn from the pundits a year ago. 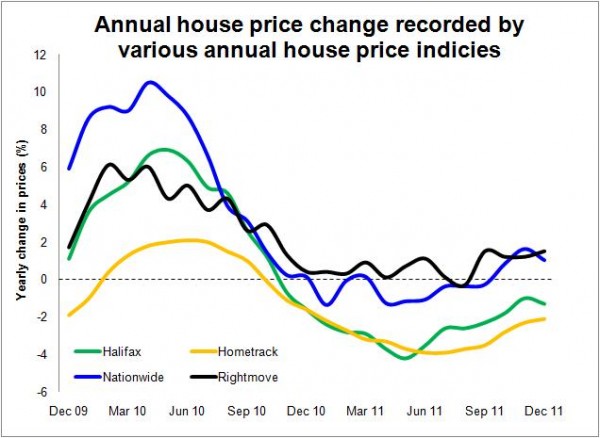 The graph shows how the various indicies suggests that the annual price rise has eased and is now flat or possibly on a path of gentle decline. Taking inflation into account what we saw in 2011 was a real-terms fall in prices.

The best bet for this year, looking at the array of forecasts, seems to be to expect much the same again – some forecasters expect a slight rise, some a flat market and others a fall.

The big difference this year is that any qualifying notes associated with forecasts are much more likely to carry hefty warnings of a big downside risk if the eurozone collapses.

One factor we have to take into account in these figures is that they are so heavily influenced by the London market and in many ways that operates almost as if it were a separate country. The capital’s housing market has been strongly supported in recent years by an influx of international investment.

The general view is that the disparity between London and the rest of the UK may not be as stark this year as last, but prices in the capital and the south are expected to be far more resiliant than elsewhere.

Here is a selected list of recent forecasts listed from the more bullish to more bearish, with their last year punts for 2011 in brackets. These just give a flavour and I have not put down the index against which each is measured.

Below that I have summarised the key factors that the forecasters have tended to point to. The judgement on where prices will end up roughly rests on how strong they feel each of these factors is in relation to the others.

The main factors put forward for holding up prices appear to be:

The main factors expected to press down on prices appear to be:

But for house building price is just one factor that influences the market and whether homes are built or not built.

Probably of more interest are expectations for the number of housing transactions. Here looking at forecasts from the Office for Budget Responsibility, the Council of Mortgage Lenders, Savills and Jones Lang LaSalle, the suggestion on balance is that we should expect a slight drop in house sales this year compared with 2011. 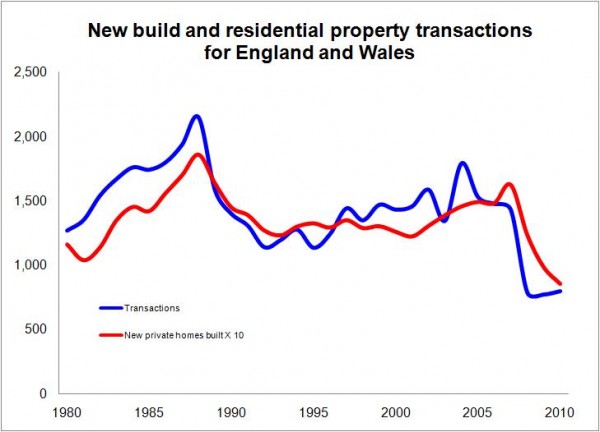 The worry for the industry here is that the number of new private homes built has for many years (since the late 1970s at least) tracked very closely with the total number of housing transactions. The graph (using DCLG house building figures and HMRC transactions data put together by the Council of Mortgage Lenders) illustrates just how closely new private house completions track the total sales in the market in England and Wales.

So, while the Government has introduced a number of schemes to boost house building, the wider market conditions seem to be telling us that the growth in private house sales will be constrained.

Add into the mix downward pressure on the social sector and the picture for house completions looks pretty weak this year. Indeed, the Construction Products Association reckons that house completions this year will be about 5% down on 2011.

So for those looking for where the action is in the UK house building sector, it will probably be in much the same places as last year. The emphasis will remain on southern England and the more affluent areas, where folk with existing housing equity are keen to live.

One thought on “So what should we expect the housing market to do in 2012?”