I was wrong. Not all the construction forecasts are being revised down this time around. Experian has slightly lifted its expectations for construction growth for this year and next compared with its summer forecast.

In the summer it was looking at a fall of 2.6% and 3.5% for this year and next, those expectations are now smaller falls of 2.1% and 3.3%. This is despite a lower forecast for GDP growth. 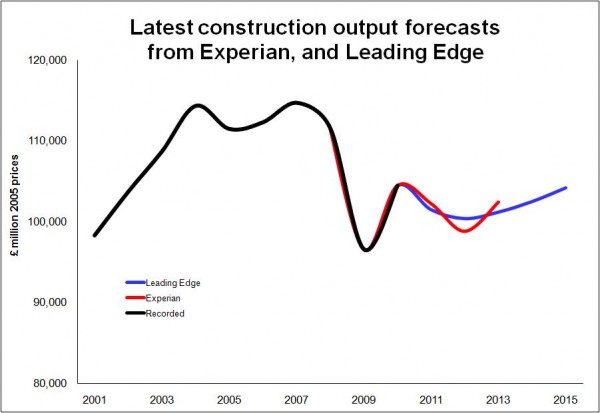 Experian had revised its summer forecast quite a bit. And as the graph shows against the Leading Edge forecast it is still bleaker in the short term.

But data since the summer has shown the decline in public sector spending to be more muted than expected and growth in infrastructure has proved stronger than first thought. This has led Experian to shade the forecast up a tad.

What remains a feature of the Experian forecasts is its optimism in 2013, when it expects a fairly strong recovery with overall output rising 3.7%.

In large part these figures are driven by predicted strong growth in commercial (up 9%) and private housing (up 7%).

This growth will be underpinned, in the view of Experian, by the continued strong performance of the infrastructure and industrial sectors and a moderately strong bounce back in private non-residential repair and maintenance work.

But, while this forecast has been revised up, the risks still remain very much weighted on the downside.