There was good news in today’s release of the latest GB construction output figures. The data was revised to show the second quarter growth rate at 1.1% rather than the 0.5% published a month ago.

But for most in the construction industry it may be all a bit academic how we reinterpret the past. What matters more is what just happened and what does that tell us about what is going to happen.

On this score the figures appear on the bad side. But on the basis of the data we have, cause for concern rather than panic. 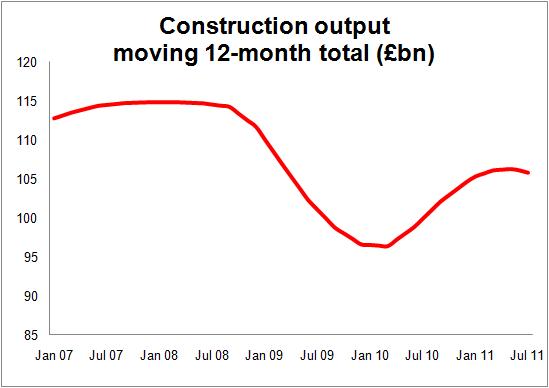 The latest monthly figures are not seasonally adjusted, so absolute changes in the figures month to month are a bit meaningless.

But comparing the 12-months to July with the 12 months to June and May and so on provides a rough element of seasonal adjustment. On this basis the trend is broadly flat in cash terms, but down if we look at the constant price figures.

I have put together a graph that shows the monthly changes in the 12-month moving average based on the constant price (volume) figures. For the older data I split the quarterly figures equally between the three months of the quarter. It is just a way to look at the trend.

This graph and the data support the suggestion that the surge in growth enjoyed by the industry after the initial post-credit-crunch collapse is running out of steam. Growth seems to be coming to an end and we are now heading back down again into recession.

This fits with the pattern we see in the previous quarterly figures.

Before going further, I must include the reminder that the figures are, as things stand, likely to be revised upward each month. So the figures published today are probably underestimates.

The revisions are quite substantial. For instance there was £205 million added to the current price all work output figure for June – that’s about a 2% rise. But relative to the May figure, which revised up £138 million, it was just £67 million up.

Over time a monthly figure for all construction output may rise in current prices by, say, £500 million on where it started, as a result of the gradual upward revisions over time.

This accounts for the rather sharp upward revision in the Q2 figure.

But before anyone goes off screaming at the ONS, these revisions are inevitable as the statisticians have to impute for late responses. It’s a new series and over time the imputation method will be better tuned and the revisions will be smaller.

For now when interpreting these figures we have to realise that we have a moving target, although we have a good clue which direction it is moving in and how fast.

So, as things stands, while we see a trend down in the figures it is reasonable to assume it will end up after revisions as not being as steep.

I hope that makes sense.

Trying to mentally, or if you want to be bothered mathematically, correct for the likely revisions leads to the interpretation that in cash terms more money is probably coming into the industry than there was last year, but the work actually being done is a bit less.

Now what does that mean for the future?

Basically these numbers fit with the idea that the industry is at a turning point. Growth has petered out and we are heading for a downturn. The real question that businesses should be asking now is how fast will the decline be and how far will it go.

On the basis of the recent new orders figures, I would suggest that the decline could accelerate quite sharply, unless we see a rapid change in the prospects for private sector investment.

And this does also seem to fit with much of the other data we are seeing from the industry.