I’ve been quizzed a bit in recent hours for my views on the residential planning system in the light of the reported drop in planning permissions.

One graph that might prove interesting is one I have on file which tracks the figures from the communities department. It shows the number of decisions made within 13 weeks and the proportion of applications approved for major residential schemes. These are schemes of 10 or more homes. 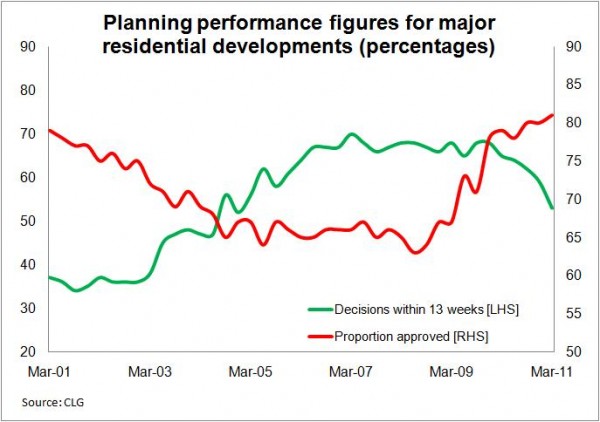 It is silly to read too much into aggregated data on planning because they are very quirky, there are huge variations regionally and they are very tricky to interpret.

But two things do appear to be happening. Local planning authorities are making a lower proportion of decisions within the 13-week limit. Meanwhile more of the applications received are being granted.

The drop in the proportion of decisions made within 13 weeks may be down to scrapping incentives aimed at speeding up planning that were set within in the Housing Planning Delivery Grant. This may seem like bad news, but it’s not as bad as you might think.

There’s plenty of evidence to suggest that providing an incentive to local planners to come to a decision before 13 weeks led to an increase in rejections. That is the sort of problem you get with badly framed incentives.

My best advice is to be cautious about how you try to interpret planning statistics. There are traps all over the place.

But certainly on the face of it, if planning authorities were in the first quarter of this year granting permission to 81% of the applications they received compared with about two thirds as was the case for the period 2003 to 2008, it doesn’t immediately smack of a system in crisis.

That doesn’t however mean there isn’t one.