For those hypersensitive to twitches in the housing market the latest batch of data will not be comforting.

Today we see the housing survey results for April from the surveyors’ body RICS, which its economists interpret as revealing a broad-based improvement, albeit within a market that remains fragile.

This is interesting given that the results suggest that, while fewer estate agents are seeing prices fall, the direction of prices remains downwards. The RICS’s headline prices index in the month shifted from -23 to -21 and in many regions outside London a very large majority of agents are still reporting prices down rather than up.

But it must be remembered that from an estate agents perspective, while house price rises are normally good news, numbers of buyers and sellers tends to be more important.

The survey does show signs that more people are now putting homes on the market. Sadly for estate agents there’s no rise in the numbers of buyers coming onto the books.

For those that are concerned about triggers that might precipitate a house-price fall this is not good. The general rule is that if the number of sellers grows significantly and there is no corresponding rise in the number of buyers house-price growth is likely to ease if no turn negative. 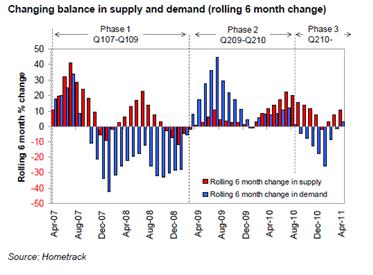 This is a point well explored by Richard Donnell of Hometrack. Here’s a lovely graph (see right) he put in his latest release which shows the shift in supply and demand within the market over recent years.

Despite this, Donnell sees the balance of supply and demand pressing down on prices from here, with a slowdown in buyers coming to the market and an increase in homes coming up for sale.

He points to the slight fall in the Hometrack measure of the proportion of asking price being achieved as a possible early indicator of the market softening for sellers.

Meanwhile, the Halifax house price index released this week will be playing on the minds of house sellers. The latest figure suggested prices dropped 1.4% in April and are 1.2% down over the past three months.

Halifax’s housing economist Martin Ellis saw the figures as further evidence of a steady but slow decline in house prices.

A similar albeit slightly more positive take on the market was provided by Robert Gardner, Nationwide‘s chief economist, with the release of its latest index. This showed falling house prices in April, albeit a more modest fall of 0.2% and off the back of an earlier pick up.

He suggests that a slight improvement in the labour market combined with low interest rates will result in some support for demand in the market, but with the effect that prices will move sideways or drift modestly lower this year.

These modest falls in prices will have some impact on the propensity of house builders to open up sites and start building, but probably only a very marginal impact.

But the reality is that house sales remain stuck at about half the pre-credit-crunch level, as the latest transaction figures show, and it is market liquidity that tends to be a big determinant of how many private homes get built.

On the ground builders will tend to look to secure sectors of the market and secure locations. That broadly translates into a bias in where builders will most probably target – towards the South and towards the more affluent – equity rich – buyer.

Outside of this they will probably be looking to markets where there is a much higher than average turnover of stock.

But as things stand there seems to be little incentive for most house builders to pump up their volumes.