House prices dropped over 2010 by 1.6% on the normal measure used by Halifax and appear to be on the way down.

Meanwhile the Bank of England reinforced what we already knew –or at least thought we knew – that the appetite for mortgages waned markedly in the final quarter of 2010 and is expected to decline still further this quarter.

So, things don’t look too perky on the house price front (unless you are buying) when we add in all the other associated data from recent indexes and reports. 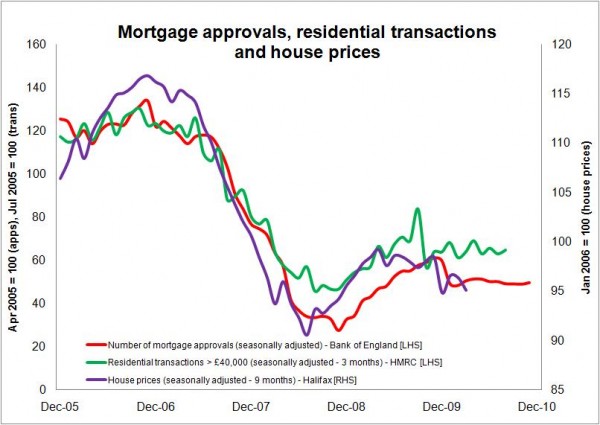 I have updated the graph I have been using for some months showing three key indicators (with lags): transactions, mortgage approvals and the Halifax monthly index seasonally adjusted.

Assuming we accept the data, we appear set on a downward path for house prices.

This naturally raises the question of how far and how fast will the decline be in house prices if there is no rally.

The answer that the nation’s experts give to that question can be seen in part in the blog I did recently showing a sample of forecasts.

Taking a rough average, the answer they appear to be providing is that we should expect to see a further shallow drop in house prices this year.

This however is based on current knowledge and a set of assumptions. What will actually happen may well be very different.

For my money the strongest case against a large fall in house prices this year is that mortgage rates are at an all time low.

This I suspect will act to moderate supply with fewer discretionary sellers choosing to come on to the market as and if demand dwindles. Although if fear of a house price collapse takes a grip, sellers currently holding back might choose the “cut our losses” option and enter the market sharpish.

Meanwhile, low lending rates should reduce the likelihood of a surge in supply that might otherwise result from a more painful increase in financial distress among current mortgage payers. We should expect to see fewer repossessions than would be the case at higher mortgage rates and fewer people downsizing, given the relative benefits are less with lower mortgage rates when compared with the transaction costs associated with moving home.

So, at the point where deals are done there may be less demand, but equally we might expect supply to be suppressed.

This does of course suggest that transactions will be suppressed and while this should put downward pressure on prices, we should also expect to see – once again – a very odd market with a wider range of settlement prices one might expect in a more normal market. And an increased proportion of “bargain sales” might skew the averages of the indexes suggesting that prices are falling faster than most people will sense.

There is, of course, the chance that a highly suppressed supply might even lead to upward blips in prices. Some argue that this is likely.

But there remains a major downside risk for the housing market and that is over rising inflation, the movement this might prompt in the Bank of England base interest rate and the response from mortgage lenders.

Currently the spread between the base rate and the average mortgage rate is high. Given the increased risks associated with lending in a falling market, given the pressure to rebuild balance sheets and given the nearing deadline for lenders to pay back £185 billion leant through the Bank of England special liquidity scheme – among other financial and regulatory pressures – there is a question over how much lenders would be prepared to see their spread over base rate reduce.

If mortgage rates rise this will weaken one of the props in market and the forecasts you see now will almost all be suspect on the upside.

So, while the odds probably remain on for a gentle decline in house prices, there are potential huge risks that the pace of house price declines may quicken.