The official figures for orders for new construction work in the third quarter of this year were not a particular surprise, but they do reveal starkly just how fragile prospects are for the industry.

The graph below shows clearly the impact of the fiscal stimulus, which reversed the tailspin in orders. But now that public spending is in retreat we are seeing orders fall away at an accelerating rate. 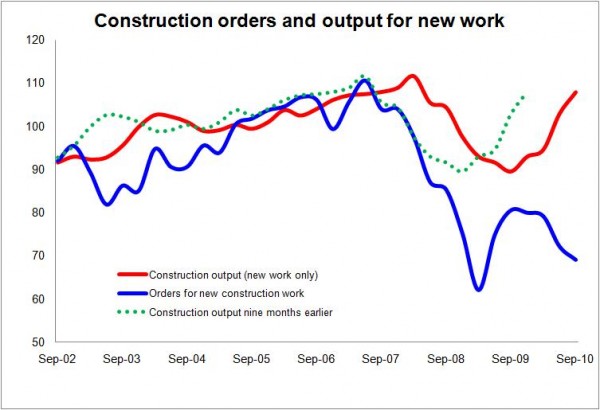 So in time we should expect to see the same for construction output, at least that which is related to new work as opposed to refurb.

But importantly it is the new work sector that most forecasters see as the main route for growth over the next few years, particularly house building and commercial construction.

Both of these two large sectors did see an increase in orders in the third quarter, notably the housing sector.

However, the jury is still out on whether we will see sufficient growth from the commercial sector to propel significant growth in construction. And we will have to see much more growth than that shown in the latest data before we can be confident of its ability to help lift the industry as a whole.

Meanwhile, the strong increase in orders for new private housing was not unexpected as that corresponded with a period of restocking and growing optimism around future sales. Some of that optimism has ebbed away and a new pall of gloom has appeared on the horizon.

With private house builders on balance now expecting sales to be down in 2010 compared with 2009, according to the latest HBF survey published in Housing Market Report, it may well be that the growth in private sector housing orders and output fails to live up to earlier expectations.

So for the building side there remains little real evidence within these figures to support optimism, although equally there is no reason necessarily to be unduly downbeat.

As for infrastructure the numbers could appear to be looking bleak with a halving of the level of orders compared with a year ago. However it is extremely difficult to read the future direction of output simply from the bald figure for new orders, given the size and long project time of some contracts let.

But the figures do suggest that the flurry of new orders seen at the bottom of the construction slump have begun to slow. The third quarter level of orders was the worst in volume terms for almost four years.

To provide some further clue as to what these latest might mean for work on the ground I have drawn in a line showing the level of output nine months earlier to illustrate the rough lag in the figures.

The relationship between orders and output is far from an even one, but if this crude relationship holds we should expect to see construction output falling away quite noticeably in the coming months.