The latest forecast from Leading Edge may provide some comfort to those who are fretful about the prospects of ever deeper declines in the construction industry as public funds rapidly shrink.

Yes, the forecast sees a drop in output next year – 0.9% after 3.2% growth this year. But the Leading Edge team are optimistic that growth in the private sector will accelerate to buoy construction overall and more than compensate for the loss work funded by the public purse.

In truth, the timing of any upturn (or downturn for that matter) can be very hard to predict, as there are so many variables and slight timing differences can significantly alter the shape of the curves.

And if there is any downside risks seen by Leading Edge it is over the point at which growth will return when the private sector expansion actually outpaces the public sector contraction. 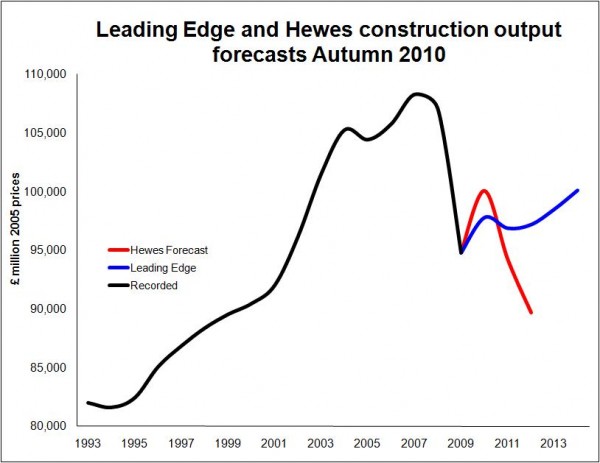 But generally speaking the forecasters see strong growth in both private housing and commercial construction next year which will accelerate in 2012.

Growth in these two huge sectors combined with continued strong growth in infrastructure and very strong growth in industrial sector construction will, in the view of Leading Edge, project new work to within a couple of percentage points of the 2007 peak by 2014.

The picture for refurb is a bit bleaker, mainly as a result of expected deep cuts to spending on the public sector housing stock.

I have placed the Hewes forecast on the same graph to show how divergent views can be on the future direction of construction output.

The issue here, I must stress, is not who will be proven right or wrong. What is important to take from this graph is just how uncertain the future is for overall construction output.